Sign in  |  Create a Rediffmail account
Rediff.com  » News » 'If we don't do something for society, who will?'

'If we don't do something for society, who will?' 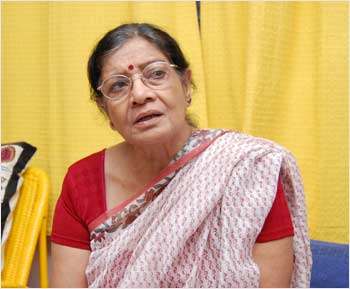 Image: Krishna Banerjee has been working towards empowering rural, underprivileged women
Video: Dipak Chakraborty Indrani Roy Mitra in Baruipur, West Bengal
"Whenever you do anything, ask yourselves three simple questions: Is my action against women; will it harm the environment; and will it worsen the global food security?"

"And if all the answers are in the negative, then go ahead and finish what you are up to," says Krishna Banerjee, a social activist in Kolkata.

She is an unlikely soul. After completing a degree in philosophy from London University, Banerjee never thought of going for academics or pursuing a career. She chose to dedicate her life to voluntary social work, a major part of which consists of empowering rural and underprivileged women.

Till now, she has directly or indirectly provided employment to hundreds of people, helped rural and less privileged women speak their minds in a male-dominated world as also breathed an air of confidence into many small and medium non-government social welfare organisations based out of West Bengal.

People like her are hard to come by, especially in a world populated by career-obsessed individuals. And you can't help being amazed at her choice.

But don't make the mistake of speaking your mind.

For, then you are sure to be reprimanded by the 73-year-old activist. "I was born into an affluent family, married to a successful doctor. If people like us do not think of doing sometime to improve the state of the world that we live in, who will?"

'As fulfilling as undertaking a pilgrimage'

Banerjee owes her zest for social work to her mother. "My father owned coal mines in and around Ranigunge in West Bengal. As an adolescent, we had seen our mother doing some voluntary social service. She had a small medical kit, was a trained midwife-cum-paramedic."

"Apart from heading informal mahila mandals, she would often help underprivileged women during a medical emergency. My mother must have instilled in me a desire to emulate her as a grown-up."

"For someone willing to do some good work," says Banerjee, "opportunities are bound to cross your path."

From working with rag pickers in Kolkata's Dhapa dumping grounds to improving the state of life of 10,000 slum dewellers in the city's Lake Town, Banerjee spent 25 years in doing what she feels is "as fulfilling a job as undertaking a pilgrimage."

Teaching rural women 'We can!' 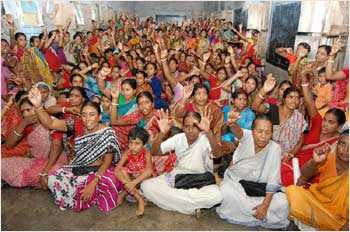 Image: Women at Nishtha raise the slogan, Equality for All

As vice-president of Nishtha, a community-based organisation located in Baruipur, South 24 Parganas, Banerjee has her hands full making women and the larger community conscious of women's rights; providing women economic independence through vocational training as also by providing loans for small businesses.

In recent years, she has been teaching rural women to say 'we can' and stand up against domestic violence as also training adolescents on reproductive and sexual health.

Apart from fetching funds for the sustainability of Nishtha projects, Banerjee looks into their daily functioning minutely, never letting her age or related ailments come in the way.

Through her selfless work and labour as also through the relentless toil put in by hundreds of Nishtha workers, the organisation now works in more than 250 villages in five blocks in West Bengal's South 24 Parganas district as also in Bhutnir Char, an isolated piece of land born from land erosion in Malda.

Recently, Banerjee also conceptualised and implemented a programme christened Adarini or 'the cherished ones' for rural girls in the age-group of 11 to 18 in Mograhat II block of South 24 Parganas.

One of the first programmes of its kind in India, Adarini seeks to prevent early marriage, girl trafficking and child labour. It also provides support to these girls and their families so that they can lead better lives.

'We put up with much nonsense in the past, but refuse to do so now' 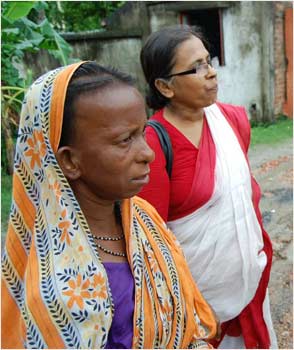 Image: Harani, whose life changed because of Nishtha, with Mina Das.

On a very wet Sunday morning, we accompanied Banerjee to Nishta in Baruipur, roughly a couple of hours drive from Kolkata.

We had expected the turnout at the Nishtha centres to be meagre but were surprised to be greeted by Mina Das, an enthusiastic Nishtha activist, surrounded by hundreds of rural folk, each eager to narrate her life story.

Amidst the crowd, one woman, Harani, drew our attention, probably because the word 'poverty' was written all over her.

"I live in a hut. The roof is broken and water leaks through during the monsoon. I cannot afford two square meals a day. But I avoid telling the truth to my 7-year-old daughter. I dissuade her from eating twice a day by saying that as there is no proper toilet in our area, she should eat less."

"When my daughter insisted she should be sent to school, I had no other option but to come to Nishtha. Now, thanks to their help, my daughter has got a chance to study," says Harani, wiping away the tears.

"I used to get beaten up by my alcoholic husband. I put up with it for years, but then Nishtha came into the village swept all my inhibitions away. I learnt to resist violence. Not only did I protest, I started taking sewing classes in Nishtha."

"Now I run a small tailoring shop, put my daughter in school. I have taught my drunkard husband a lesson. Women are the pillars of a family. No one has any right to disrespect them," says a woman in her mid-30s. Her voice is drowned in a slogan raised by the adolescent group: "Naari purush soman soman (men and women are equal)."

'The essence of humanity lies in sharing' 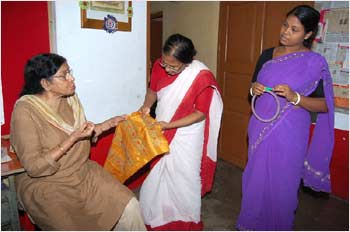 Another face in the crowd, a 30-year-old woman, walks steadily towards us, takes out some handicrafts from a small plastic bag and recounts her days of sorrow.

"My husband's torture scarred me badly. The thought of committing suicide thronged my mind every minute. One morning, a friend took me to Nishtha and that morning changed my life forever. I bid farewell to my tortures, learnt making handicrafts and started earning a few months later."

"You don't need to be educated to face the world," she says. "All you need is a free mind and persistent grit."

"Nishtha is replete with success stories like these," says Mina Das, pointing at the room full of Nishtha beneficiaries.

"Krishnadi's vision and guidance have helped these women make their presence felt in a male-dominated society. Nishtha's journey has just begun. We still have a long way to go," says Das.

Her words are seconded by Banerjee's brother-in-law Saradindu, who was so inspired by his Boudi (sister-in-law in Bengali) that he gave up a career in pharmacy to join the social service sector full time.

Saradindu now works for the Kolkata wing of PRIA, Society for Participatory Research in Asia. PRIA is an international centre for learning and promotion of participation and democratic governance.

Like his sister-in-law, Saradindu does not regret the choice he has made. "The onus rests on the privileged to lend a helping hand to those who are not so lucky. The essence of humanity lies in sharing."