Extraordinary Indians: The doctor who charges only Rs 2 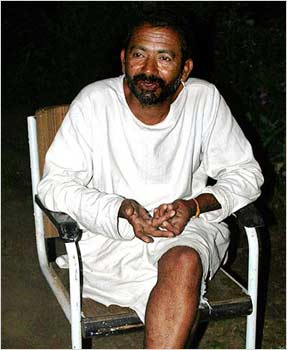 Image: Dr Ravindra Koelhe at his home
Photographs: Uttam Ghosh
'If you want to serve mankind, go and work among the poorest and most neglected,' Dr Ravindra Koelhe, who has been serving the tribals of Melghat, Maharashtra, for 24 years, tells A Ganesh Nadar.

Continuing our series on Extraordinary Indians.

Dr Ravindra Koelhe, MD, lives and runs a clinic in Melghat, Maharashtra. His fee is Rs 2 for the first consultation and Rs 1 for the second.

Not only is he a doctor and social worker, Dr Koelhe has also taken the government to court for having failed in its duty to protect the Korku tribals of the region.

After completing his MBBS, he worked in Melghat for a year-and-a-half only to realise that he needed more expertise to handle the problems of the tribals. So he went back to medical college for an MD in preventive and social medicine.

"I have now been here for 24 years. In those days there were two public health centres and no roads. Once a week, I used to walk 40 kms from Dharni to Bairagarh to reach my clinic. I used to see at least one tiger every month. Since the last three years I haven't seen a single one," he says remembering his early days as a young doctor.

After completing his MBBS from Nagpur University, he decided to work in rural India. An ardent follower of Mahatma Gandhi and Vinoba Bhave, he was also influenced by Ruskin Bond who wrote, 'If you want to serve mankind, go and work among the poorest and most neglected.'

He toured the rural areas of Gujarat, Maharashtra and Madhya Pradesh and decided that Gadricholi in Maharashtra was the most backward amongst his travels and decided to work there. His mother discouraged him since it was a Naxalite affected area. She told him that Melghat was equally backward and that he should work here instead.

Dr Koelhe has been in Melghat since then. It has been 24 years now. 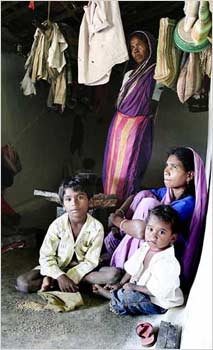 Image: Inside a tribal hut in Melghat
Photographs: Uttam Ghosh
Melghat means the place where mountains meet. It lies on the Maharashtra-Madhya Pradesh border and is easily one of the most beautiful places in the country, its greenery only broken by the brightly coloured clothes of the Korku tribals who have made these mountains their home.

But the region's beauty is overshadowed by its hostile terrain. Its infrastructure is deplorable. The roads are pathetic, the only way one can access its remote villages is in rugged four-wheel jeep.

Melghat's problems are far too many. There is no power for miles, new power lines are discouraged because this a designated tiger reserve. Though the tiger is rarely spotted here, the so-called presence of the tiger has contributed to the total neglect of this region.

The poor tribals live off the land. They cultivate their small patch of fields on the incline of the mountains. There is no irrigation system and no wells because there is no power to pump the water.

In this wilderness, Dr Koelhe has stayed on to alleviate the misery of the tribals.

He feels Melghat is a socio-economic problem, which needs to be dealt with holistically. "We as doctors can look after them when they fall sick, but there are other shortcomings that have to be addressed like education, skill enhancement and assured economic activity through out the year."

"When I came here the infant mortality rate was close to 200 per 1,000 babies. Now it is 60. In Kerala it is 8 and in rural India 9. We have to bring it down to the national level. That is why I have filed a public interest litigation in the Mumbai high court."

Discussing the case, he says, "We have filed our affidavits. Now the government has to reply. They don't file a reply for months together. Who can do anything? We want to sit down and discuss the problem and solution, but they don't want to sit with us. We cannot force them."

'There are 400 schemes for tribals, but they don't know about them' 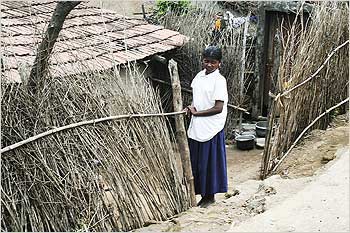 Image: A tribal village in Melghat
Photographs: Uttam Ghosh
Stressing on the need that it was important to improve the health of the tribals he feels the attitude of doctors assigned to the government's public health centres has to change.

"They have to learn to serve. They should not make the tribals feel they are doing them a favour."

Highlighting the problems of the area, he says farming depends on the rain and tribals are jobless with no avenues of income for eight months in a year.

To add to that, there is no availability of food in Melghat from March to October. Milk is scarce and irrigation facilities are absent. Before 1978, tribals used to hunt and eat small animals like the rabbit to sustain themselves but after the region was declared as a tiger reserve, hunting became illegal.

Since there are no veterinarians, the cattle owned by the tribals often die without the right medication. There are 20 artificial insemination centres but are all shut for want of vets.

The Melghat area shot into the national limelight last year because of infant deaths due to malnutrition, but Dr Koelhe said it was wrong to label them as 'malnutrition deaths.' "It is more like starvation," he had said when I met him last year while reporting the infant deaths.

"There is no availability of food here from March to October. The mother is therefore malnourished, and thus we have neo-natal deaths," he explained.

The tribals are unable to rear poultry for their livelihood because the chicks often die within the first two days. "There is a vaccination that has to be given in the first 36 hours after birth, but how do we give it? Since the tribals are a scattered population, it is not possible."

The National Rural Employment Guarantee Scheme, the government's programme to provide rural employment for 100 days, was started here, but was then halted. Bhandu Sane, the founder of the non governmental organisation Khoj, told rediff.com that the NREGA was not functioning in the Dharni and Chikaldhara talukas. Moreover, workers who had worked under the NREGA had not been paid wages totalling Rs 3 million in the Chikaldhara taluka. Wages were also pending in Dharni.

Dharni has been declared a drought hit area. Many areas in Chikaldhara also face drought.

"What we need is awareness. There are 400 schemes to look after the tribals from the womb to the grave, but the tribals don't even know what these schemes are. And those who know are not interested in implementing them," says Dr Koelhe resignedly.

The tribals have to be provided with safe drinking water and need well stocked ration shops in every village. "The agricultural board is closed. It has to start again. Irrigation facilities to store water are needed and tribals have to be taught the use of fertilizers and pesticides."

"The best thing the government has done here is to open more than 300 schools. In those days there were no teachers. The even better thing that the government did was to introduce Korku text books in 1985. Now primary education is in the Korku language. This has gone a long way in making the tribals literate and given them confidence to attend school."

'Tribals should demand what their right is' 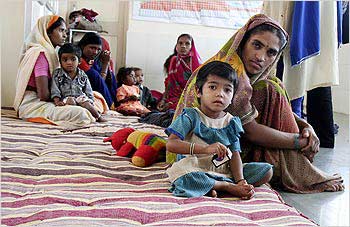 Image: A primary health centre
Photographs: Uttam Ghosh
Instead of discussing what the government should do for the tribals, Dr Koelhe firmly believes that the tribals should be taught to be independent and demand what is theirs.

"I run training classes here for batches of tribal youth. We tell them about their rights and the schemes available for them. We teach them to demand what is their right and tell then never to bribe," he declareS proudly.

He also advises them to grow vegetables which are necessary for their nutrition.

"We are not here to duplicate the government's work, but to supplement it. I tell all my patients to go to the public health centre, and come to me only if they are not satisfied there. Even then after seeing them I always send them back to the PHC. I also call the PHC to explain the problem so that they can solve it."

The doctors at the PHC respect him and follow his advice. The cooperation of the medical faculty in this area makes life easier for the tribals who feel assured with Dr Koelhe around.