News
Business
Movies
Sports
Cricket
Get Ahead
Money Tips
Shopping
Sign in  |  Create a Rediffmail account
Rediff.com  » News » 'Change this Rahul. You can do it, we know this'

'Change this Rahul. You can do it, we know this' 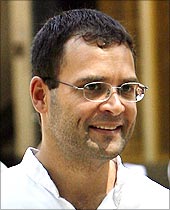 Anguished by the reinstatement of RR Patil as Maharashtra home minister on the eve of the first anniversary of the 26/11 terror attacks on Mumbai -- following which Patil was asked to quit -- Bollywood director Vikram Bhatt wrote to Congress general secretary Rahul Gandhi, asking him to set things right. We present the letter below:

I am writing to you because you are who I see as the future of this country, you are, I can see a person who wants to make a difference, you are, I can see, someone who gets pained and hurt; you are my generation. You have travelled the world and want to make our country count when it comes to the leading nations of the world, you have, like us grown up on Michael Jackson and Duran Duran, you have lost a lot more to this country than anyone I know, you have seen tragedy both personal and national, you are us, you are the only one we can talk to and think that we would be understood.

Rahul we are tired, hurt and very unhappy. It has been a year since the 26th November attacks on our country and I am not even going to go into what has happened about it. We have seen the dossiers go back and forth from India to Pakistan and back, we have seen the Lashkar chaps arrested and freed. We have seen Ajmal Kasab cool his heels in the slam and the case goes on. We understand international politics and we understand that these things take time but I am hurt about the reinstatement of R R Patil.

I have nothing against R R Patil personally, and he might be the man for the job, but what has hurt me is the attitude behind all this political maneuvering. It goes to say that I am an idiot and what I feel is not important. He said something that hurt us deeply and then was asked to step down and then even before a year is gone he is back again and that means I am supposed to have a weak a memory and I am supposed to forget. It does not matter what I feel and what I have gone through to see my city scared, what matters is that I have been given a pat on the back and the tag of being resilient and R R Patil sits here as the symbol of the impotent rage of a Nation. R R Patil is the government's way of telling us, the citizens, that we and what we feel does not matter. We are cranky children that have to be given a candy when we are complaining to shut us up and then we will wipe our tears and toe the line obediently. It's sad.

Change this Rahul. You can do it, we know this.

We watch the balkanisation of our state with silence and we see the MNS play the Marathi card to get the better of the Shiv Sena. We see the violence at the swearing-in ceremony and we are embarrassed and we keep quiet.

Rahul, do you remember when we went to school and they taught us the Constitution they told us that we lived in a democracy and that we were a secular State? We were all one, all the languages and all the people and all the states. We are one country and we have the freedom to talk in any language. Then why are we scared? Why are we scared that the MNS workers will come and beat us up and that we will lose our business and our lives? Is democracy about living in fear? Is that what our forefathers fought the British for? Do you think there is any difference between a man who comes from out of the country to spread terror and the man who stays in this country and spreads terror? Terror is terror, no?

Rahul, we are scared of terror from Pakistan but we are also scared of our neighbours. Should we be living in dread and fear? Is there nothing going to be done about this?

I also remember a poem by Rabindranath Tagore that we learnt in school. This was the poem.

Where the mind is without fear and the head is held high;
Where knowledge is free;
Where the world has not been broken up into fragments by narrow domestic walls;
Where words come out from the depth of truth;
Where tireless striving stretches its arms towards perfection;
Where the clear stream of reason has not lost its way into the dreary desert sand of dead habit;
Where the mind is led forward by thee into ever-widening thought and action
Into that heaven of freedom, my Father, let my country awake.

Do you honestly feel that we can say that even one of these lines of the poem have come true? As I write this piece my father says that I should not write this and get involved with politics and such. He is scared for me and I am scared for the country.

I don't know if this will ever reach you. I hope it does. You are our only hope. I am shooting this arrow into the air and hope that it finds a voice.

One year on, Mumbai police taking no chances