Image: A photograph of Assistant Sub Inspector Tukaram Omble along with several awards received for his bravery at his home in Worli, north-central Mumbai.
Photographs: Rediff Archives
If it was not for Assistant Sub Inspector Tukram Omble of the Mumbai police, Ajmal Kasab would not have been captured alive. Omble was felled by the terrorist's bullets and recieved the nation's highest peace-time gallantry award, the Ashok Chakra.

Prasanna D Zore reports on how life had changed for the Omble family a year after the tragedy.

When alive, Tukaram Omble was the only man in a family of six that comprised his wife and four daughters, two of whom were married according to his wishes.

Today, there are three men in his family: His wife Tarabai and two daughters, Vaishali and Bharti. This is the biggest transformation the Omble family has seen almost a year after Assistant Sub Inspector Tukaram Omble was felled by Mohammed Amir Ajmal Kasab's bullets in the early hours of November 27, 2008.

In a daring act, Omble had pounced upon Kasab without thinking too much about the consequences. His daredevilry made it possible for the police to overpower Kasab, who was the only terrorist to be captured and is facing trial in a special court in Mumbai.

"We have to think very carefully before taking any decision now; he is not around to hand-hold us anymore but we have to take decisions like he would have done had he been with us today," says Vaishali wistfully, sitting next to her father's picture.

The oil lamp next to his photograph has been burning ever since Omble died. "My mother replenishes the oil each time the flame starts dropping," says Vaishali of her mother.

Vaishali is the one who interacts with the media as her mother is too shy to speak and her youngest sister Bharti is still to recover from the shock of her father's untimely death.

While Vaishali completed her BEd from the SNDT College in Churchgate, south Mumbai, this year, Bharti works with the Mumbai Police in the clerical department, a job she was offered after her father's death. Vaishali Is not looking out for any job, occupied as she is with tutoring students.

"I teach Marathi and English medium students from Class VII to Class X," she says. It not only helps supplement the family income but also helps keep her mind away from thinking about her father's death.

"Bharti sometimes feels our father is still alive," says Vaishali. "She strongly believes that God will send our father back on earth as he has done good deeds and deserves to be a part of the family."

'We will then lock him up in one room and never let him go away,' Bharti tells her mother and Vaishali.

Her father's death has brought one more change to their lives -- the loss has shorn Vaishali's faith in God and the family has stopped celebrating festivals. 'If YOU exist, then how could YOU let a good man like my father die?' she often fights with God.

"We have stopped celebrating festivals ever since he died. We don't feel like buying new clothes. When he was with us he would buy a new dress for us almost every month. We miss his presence so much," she adds. 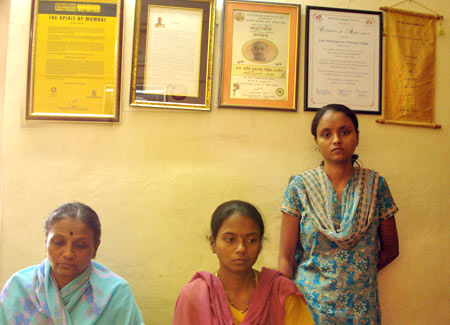 While Omble's death is a fact of life for the three women, they have been overwhelmed by the public support after his death.

"People have been pouring in since last year. Even during Diwali, they -- some known and some unknown faces -- came to meet us and brought gifts for us. They want us to feel at home; they don't want us to feel the absence of our father; but then that is not possible. However, we are really deeply touched by the affection showered on us," says Vaishali.

recent media reports have been really disconcerting for the Ombles. One of Omble's fellow officers, who was with him on that fateful night, Vaishali says, has claimed through the media that he was the one who disarmed Ajmal Kasab.

"Nobody should take the credit away from my father's selfless act of bravery; instead some people are trying to tarnish his image," says Vaishali, the anger palpable in her voice. She refuses to name the officer, saying it is beyond her father's dignity to name the person in public.

"He has always taught us to give credit to those who deserve it. He would surely not have liked me talking about this person to the media. But I will surely give him an earful personally."

She further expresses her anger: "Anybody can go in front of a disarmed man or a terrorist whose gun is empty. It becomes like a toy gun then. It's not bravery," she says.

This incident seems to have made the Omble family bitter because their father is no longer alive to defend himself.

"We all are going to die one day. We all know that. How will such people face God when they come face to face with the Almighty after their death?" asks Vaishali.