Security experts on how to close 26/11 loopholes 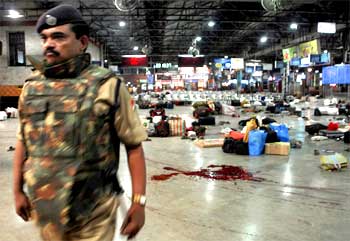 Image: A policeman at the Chhatrapati Shivaji Terminus in Mumbai on 26/11.
Photographs: Reuters
A year after the 26/11 Mumbai attacks, are we better equipped to avert another such attack? Security experts don't think so.

A report prepared by a Federation of Indian Chambers of Commerce and Industry taskforce on national security and terrorism has charted out what went wrong during the Mumbai attacks that killed nearly 180 people, loopholes in the security systems, and has listed recommendations for both the security agencies and civilians that could secure the country from another such attack.

Security experts have warned in the report that Pakistan's dubious policies on terrorism and its military establishment, which is infused with the jihadi mindset, will continue to threaten India's security in the coming years.

Pakistan will continue to maintain its infrastructure of terrorism -- networks that recruit, train, equip and finance jihadi outfits -- inside Pakistan territory, the report said.

India witnessed a new face of terrorism on 26/11 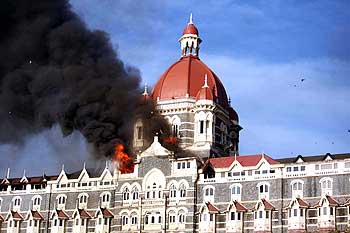 The terror attack in Mumbai was not a random incident, but a sophisticated operation with the standard of a military attack, aimed at derailing India's surging economic growth.

The attack also underlined the emergence of the Lashkar-e-Tayiba as an international terrorist organisation at par with Al Qaeda, which had probably only mentored the attacks instead of orchestrating it.

The attacks were an act of strategic jihadi terrorism on Indian territory, directed against Indians, Westerners and Jews, in retaliation to the US-led North Atlantic Treaty Organisation operations in Afghanistan and to target the growing US interests in India.

According to the taskforce, Pakistan's Inter-Services Intelligence, apart from providing funds, training and arms to the Lashkar, was also encouraging the terror outfit to rely increasingly on Indian Muslims for its terror operations in India, beyond Jammu and Kashmir.

There was also evidence that the Inter Services Intelligence, ISI, was also encouraging the Sunni paramilitary outfit Harkat-ul-Jihad-al-Islami to set up a base in India, comprising recruits from the Indian Muslim community and with little involvement of Pakistanis.

However, the panel observed, the Lashkar, with an apparent approval of the ISI, depended on Pakistanis for terror strikes of a strategic nature, where the targets were not only Indians, but also foreigners.

According to the taskforce, the Lashkar will rely on Indian Muslims for tactical strikes on soft targets, while Pakistani recruits will be used for strategic strikes that are directed at economically significant targets.

India witnessed a new kind of terrorism on 26/11 -- a deadlier, more absolutist one that was almost nihilistic in its appetite for massive destruction. The taskforce has termed the present period as the Era of Mumbai Terror.

The Mumbai attack was unusual not only for India, but also on the international scale. And, because it was so successful it may become an example for the next wave of jihadi fighters.

Need to improve intelligence on terrorism 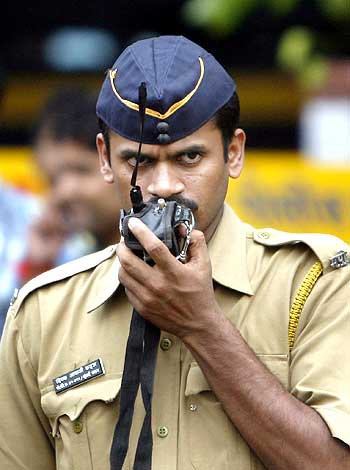 According to the FICCI taskforce, the Mumbai attacks highlighted: 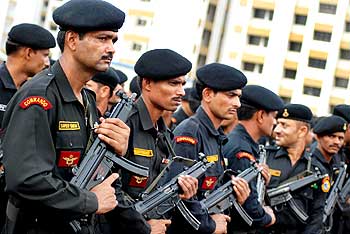 The director general should have complete access to the intelligence gathered by the Intelligence Bureau. A specialised counter terrorist force like the National Security Guard should be brought under the control of the agency for undertaking intelligence driven operations.

A national intelligence grid: The NIG should report to the proposed NCTA.

The NIG should gather data varied sources like telecom, banking, immigration, national identities, electronic spectrum and existing intelligence, police, paramilitary and other government agencies, based on which analysts should predict trends that could give a clear picture for the next 24 to 36 months.

A data-mining organisation must be set up, as it would be an important tool in correlating information from immigration authorities, transport bodies, police stations, intelligence databases and mobile telephone operators.

A department of physical security in the home ministry must be created that would act as the nodal point for coordinating all security measures in the country. 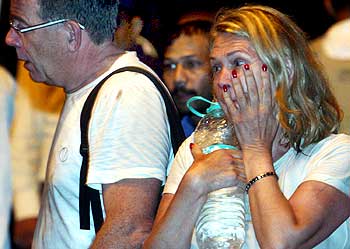 Image: Foreign guests rescued from the Taj hotel in Mumbai on November 27, 2008.
Photographs: Punit Paranjpe/Reuters
What went wrong on the fateful day

In regard to the Mumbai attacks, India did not leverage the active support of the international community -- given the fact that terrorists had deliberately targeted several foreign nationals.

There is a greater need for coordination with friendly countries and international organisations, and an urgent need to enhance effectiveness of joint-working groups through extradition treaties, intelligence sharing and joint operations.

India must develop capability for preemptive strikes, both covert and overt, on terrorist locations based in Pakistan.

India must put to use the access it has to surveillance technology, and must identify and monitor terror modules and equipment used by terrorists operating within the country.

A common investigation cell will help identify various terrorist elements and groups involved in a wide area network and neutralise them.

The taskforce has also recommended police reforms on priority basis, re-enforcement of the beat constable system, revamp of the coastal security apparatus so that the navy is not be involved in it, more involvement of private sector in fighting terrorism, amendment of the Private Security Agencies Act 2005, development of a specialised cadre for national security management, stress on human intelligence and, significantly, the end of political misuse of the Intelligence Bureau. 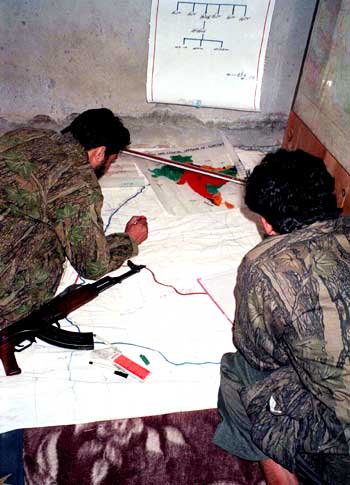 Image: Lashkar terrorists study a map of a target in Jammu and Kashmir.
Photographs: Reuters
Dealing with Pakistan: 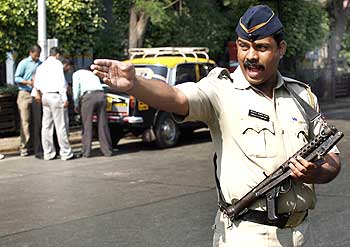 Image: A policeman stands guard as members of a bomb detection squad examine baggage in Mumbai.
Photographs: Jayanta Shaw/ Reuters
What the corporate world could do:

Corporate firms could assess the risk potential and develop a mitigation strategy. They could align the strategy with other business partners and provide security options that one could choose from.

Corporates could also invest in a near fool-proof programme designed by experts and make security audit a constant and regular feature. Further, they could also develop a fool-proof detection and communication system.

They could also develop a multi-tiered checking system for people and baggage entering their premises.

Firms could reduce and regulate access points and prepare a contingency plan by maintaining a database backup of the entire computer operations.

Private companies should encourage personnel on their rolls to join the Territorial Army and Home Guards.

Use of people power 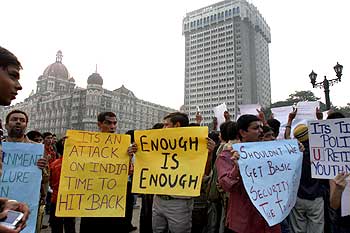 NGOs must provide policy advice and expertise on aspects to prevent terrorism, which in many cases is not available with the government.

They should explain human rights as a useful framework for developing effective counter-terrorism strategies rather than as an impediment.