Sign in  |  Create a Rediffmail account
Rediff.com  » News » Extraordinary Indians: The teacher who has become an icon

Extraordinary Indians: The teacher who has become an icon 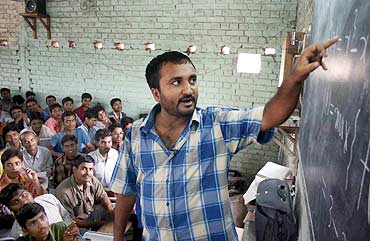 Image: Anand Kumar in his classroom
Photographs: Anand Kumar
Anand Kumar's Super 30, a coaching institute in Patna which prepares 30 poor kids for the Indian Institute of Technology entrance exam free of cost, has achieved iconic stature because of its success rate.

A Ganesh Nadar met Anand Kumar, the fiery and idealistic teacher-founder as we continue our series on Extraordinary Indians.

They are a troika of very young, simple and humble teachers led by a fiery and idealistic Anand Kumar. I could have mistaken Kumar for the neighbourhood shopkeeper, he was unshaven and dressed simply.

But behind that deceptive exterior lay an extraordinary man who has become an icon for helping underprivileged students from the villages of Bihar clear the prestigious entrance exam to the Indian Institutes of Technology.

Anand Kumar runs Super 30, a small IIT coaching school in Patna. This year too, all 30 of its students cleared the IIT entrance test, the dream of many young Indians.

Kumar met me in his ordinary home where I learnt how he brought hope into the lives of many poor children, making them believe everyday that in merit and hard work lie life's endless opportunities.

Like many Indians, Kumar had had his own youthful dreams of escaping from poverty by doing well in his studies. He had finished a BA Honours in Maths and was accepted for a post graduate degree by Cambridge University in the United Kingdom.

Just then fate struck and his father Rajendra Prasad, a clerk in the postal department, passed away.

'Mother made papad and I sold it door-to-door' 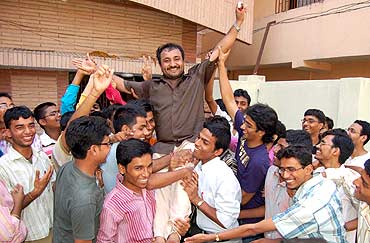 Image: A jubilant Super 30 group with teacher Anand Kumar
Photographs: Anand Kumar
Cambridge became a distant dream never to be fulfilled for Anand Kumar. Well meaning relatives and friends tried to get him his father's job but he did not like the idea as he wanted to become a mathematician. He sacrificed the security of a government job to live his dream.

He was only 21, his younger brother Pranab was 19 and studying at the Banaras Hindu University in Varanasi, Uttar Pradesh. "Mother made papad and I sold it door to door. We used to call it 'Anand Papad'," he says.

Times were hard. Everyday Anand carried two bags on a cycle and returned home after selling them. To save money, the family gave up the telephone connection, stopped the milk and daily newspaper.

The Swami Vivekananda Sewashram in Patna let out a room to him for Rs 500. Here he started a maths tution centre in 1995. Initially there were just two students, his fee was Rs 500 for each student annually. He would teach and then go to sell the papad. Slowly his reputation as a good teacher drew more students. Three years later, he stopped being a papad salesman, the telephone connection was restored along with the milk and newspaper.

In 2001 his fee was Rs 1,500 per year. He now charges Rs 4,000 per student per year. There are over 300 students at his tuition centre which is named after mathematics genius Srinivasa Ramanujan. The money earned from here is used for providing free coaching and stay to Super 30 students.

Super 30 coaches the poorest students for the IIT-JEE

Image: Teachers Pravin and Amit Kumar on how to ace the exam
Photographs: A Ganesh Nadar
The thought behind setting up Super 30 came to Kumar in 2001 when a poor student told him he could not afford the Rs 1,500 annual fee.

Anand Kumar then started the Super 30 institute to coach the poorest students and prepare them for the IIT-JEE. His only criteria was that they had to be bright and talented.

News about Super 30 spread through word of mouth primarily by the 300 students who were already taking coaching from Anand Kumar. For his Super 30 initiative, Kumar received more than 800 applications. The application fee was Rs 10.

An entrance test was conducted and 100 students were short-listed. The economic background of these students was checked and the poorest among them were selected.

The students of Super 30 receive coaching for a whole year. They get free food cooked in Anand Kumar's home and are housed in rooms spread over the city. The two girls in the last group stayed in a girl's hostel.

The students are taught four days a week from 4 pm to 8.30 pm. The rest of the time, they study or hold group discussions amongst themselves. Tests are conducted everyday. 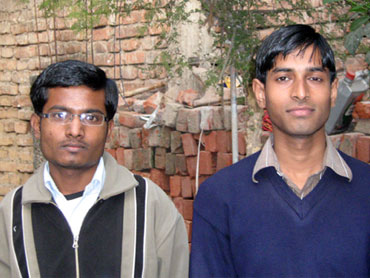 Image: Anoop Kumar and Mohammad Shadab Azam, Super 30 students
Photographs: A Ganesh Nadar
Now Anand Kumar wants to start a school from Class VI onwards. He also wants to coach students for the Maths and Physics Olympiad. "I want one of my students to win the Nobel Prize," he declares with all humility.

Many people have come forward to help Kumar financially but he has humbly refused. "We have refused all help so far. I will take it when I start building the school," says Anand Kumar, who has two well armed but polite guards.

Ask him about the armed guards and he says, "I was threatened by a criminal who was in jail at that time. He wanted me to stop Super 30."

When Kumar refused, he was attacked at his doorstep and one of his aides was stabbed. A bomb was thrown at his home and there were gun shots, but he managed to escape unhurt. After the incident, the police provided him with security.

To get a sense of the impact of Super 30 on the lives of its young students, I met some of them and came back truly inspired by what Anand Kumar has achieved.

Anoop Kumar is from Chewl village in Aurangabad district in Bihar and has studied in a Hindi medium school. He read about Super 30 in the papers and asked a friend to get him the form.

His father Ram Pravesh Prasad used to run a cloth shop but four years ago, he disappeared. "Our family survives on the little land we have and tuitions. My elder brother gives tuitions," says Anoop. 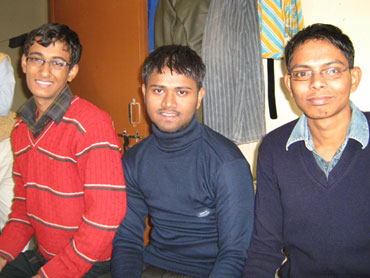 Image: From left: Shubham Kumar, A Kumar and Kanhaiya Kumar
Photographs: A Ganesh Nadar
Mohammad Shadab Azam is from Belharia village in Gaya district in Bihar. He too is from a Hindi medium school. His father Mohammad Aslam teaches typing in the village.

"No one wants to learn typing these days. Only SSC students who want to become typists come to my father," he says.

Though the classes in Super 30 are conducted in Hindi he says the students write their notes in English. Super 30 is like family, he adds.

Subham Kumar Gautam is from Kulti district in Bihar. He is an educated farmer's son. His father is a postgraduate; his mother is a graduate. Subham's uncle had heard about Super 30 during his visits to Patna and picked up a form for his nephew.

"All our meals come from Sir's home, there is a stove here, we sometimes make chuda (flat rice) or chapati and eat it with jaggery. We don't go out for movies, there is no television and no newspapers," he says.

Vishwaraj Anand is a Super 30 alumni who joined IIT in 2009. He is doing computer science at IIT-Patna. He belongs to Hasanpura village in Patna district and has three elder sisters. Two of them tried for admission to the government engineering college but did not succeed. This spurred Vishwaraj to try harder and he did succeed.

His father works in a company that makes transformers. He is paying his IIT fee through a bank loan.

After IIT, he plans to appear for the Union Public Service Commission entrance exam and get into the Indian Administrative Service. "A change has to happen and if I have the capacity I will change the system," he says. 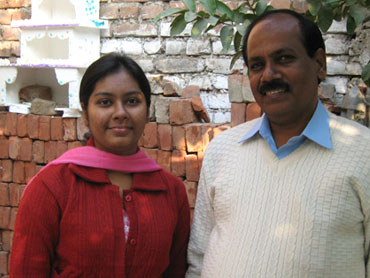 "Everyone in Patna knows Anand Kumar. Without Anand Kumar she would not have got into IIT. I don't have the money to put her in any of the private engineering college," he says.

"I am doing chemical engineering and got a merit scholarship from IIT where Rs 25,000 is subsidised from my fees every semester. I also get a stipend of Rs 1,000 every month," says Narmada.

Rahul Sharma is in IIT-Kharagpur. His father works in a printing press in Patna. Rahul now wants to do a master's degree abroad. "I want to go to Harvard," he says.

Aditya Kumar is from Nalanda district. His father has a gift shop. Two of Aditya's elder brothers had tried for Super 30 but failed to make it. Aditya is in IIT Guwahati.

"It is not only an intelligent class, it's a morale booster. We know that the past students have done well. This makes us very self confident," he says.

That is really the uniqueness of Super 30. Where Anand Kumar and his brother Pranab choose 30 children from the most economically disadvantaged homes who pass their entrance exams.

A year of this coaching has taken many of them to the Indian Institute of Technology, a hallowed learning ground in India and the world. All this because one man chose to tutor them free of cost for a future that could have been lost forever if not for his path-breaking effort.