The manager who does funerals for abandoned bodies 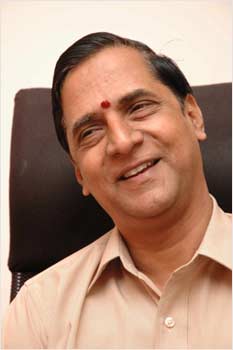 Image: S Sreedhar has ensured that the abandoned get a decent funeral
Video: Sreeram Selvaraj Shobha Warrier in Chennai
S Sreedhar collects unknown, unclaimed bodies from hospitals and old age homes and performs their last rites. He has been doing this for the past 24 years. Shobha Warrier continues our series on Extraordinary Indians.

A lazy Sunday morning, when the majority of people relax with a cup of hot coffee and a newspaper, S Sreedhar is at the mortuary at the general hospital in Chennai. The hospital authorities hand over 17 bodies wrapped in a white cloth to him. No, they are not his relatives. In fact, all those 17 people are strangers to him -- unclaimed bodies with no one to give them a last farewell.

Sreedhar takes all these unknown bodies to the cemetery, and gives them a decent burial after showering them with rice, flowers and milk with a prayer on his lips. They are buried because the names or religion of the dead are unknown. If the deceased are Hindu and from an old age home, he gives them a proper cremation according to Hindu rites.

Back home, Sreedhar, associate vice-president, IndiaInfoline, does not feel bad that his weekly holiday starts in a burial ground. On the contrary, he feels calm and blissful, having bidden farewell with dignity to some unknown souls.

Sreedhar started this service of cremating the unknown 24 years ago in 1985 after he happened to read the book Daivathin Kural (God's voice) by Chandrasekharendra Saraswati, the Paramacharya or senior shankaracharya of the Kanchi Mutt.

"In the book, he says that a dead man should be given a decent farewell irrespective of the caste or religion the person belongs to. When the atma (soul)) leaves the body, it should be given a proper farewell. This is the belief of all Hindus."

The observation made Sreedhar think of all those unknown and unclaimed bodies in the hospitals and the abandoned old people in old age homes. And when he expressed his desire to cremate the abandoned bodies to the Paramacharya, he blessed Sreedhar and asked him to go ahead.

She had children of her own, but her pyre was lit by Sreedhar, a stranger

Image: S Sreedhar at his home, living a daily life like all of us

Soon after, when he went to an old age home called Vishranthi, he found that Savithri Vaithi, who ran the home, was not there. She had gone to cremate a person who had died that day.

Ever since she started Vishranthi, Savithri Vaithi has been performing the last rites of all the inmates who die there. He told her he would like to take over her job.

Within a few days, he was there at Vishranthi to collect the body of an elderly woman. She had a son and a daughter, but the man who lit her pyre was Sreedhar, a stranger.

That night, he couldn't sleep. The image of the old woman came to haunt him, and he could only think of the futility of all relationships.

"I couldn't eat or sleep that night. At that time, we had the conventional type of cremation where firewood was used, not the electric crematorium. So I lit her pyre and cremated the body of a total stranger."

Then, there was this old man on his death bed in a government hospital, yearning to see his only daughter. He had refused to see her when she married a man of her choice. Sreedhar went to see the daughter to let her know that her father was in the last days of his life and longed to see her.

But she refused to forgive her father or visit him. He told the old man that his daughter was not at home and that he had left a message for her to come and see him immediately.

'What is there in life if you cannot forgive your father and mother?' That was when Sreedhar realised that relationships had no value in the lives of all those old people who are abandoned in the various old age homes.

"What is there in life if you cannot forgive your own father and mother? If I had any doubts about what I was doing, after that incident, I became all the more sure that I should continue with my work," says Sreedhar.

In those days, Sreedhar was performing the last rites of old people who died at Vishranthi and Nimmathi (an old age home for war widows) alone. In 2001, he started a trust called Anadha Pretha Kaninkarya Trust along with a few friends to cremate all the anadha pretha (unclaimed bodies).

A friend of his donated a second hand van to transport the dead bodies to the crematorium or burial ground. From then on, he has been burying the unclaimed bodies from the mortuaries of government hospitals in Chennai.

Sreedhar does not utter any mantras while performing the last rites; he just sings Raghupathi Raghava Rajaram and prays for the peaceful departure of the soul.

"The first time I performed the last rites of an unknown person, I was disturbed," he says after burying the 17 corpses.

"Today, I performed the last rites of those 17 unknown people, and I didn't know which religion and caste they belonged to. I know only the gender and age of the persons in the police records but I could sense the departing souls blessing me, with strong positive vibrations. What I experience now is only bliss, total bliss. That is why I am always calm and peaceful."