The school dropout with a PhD 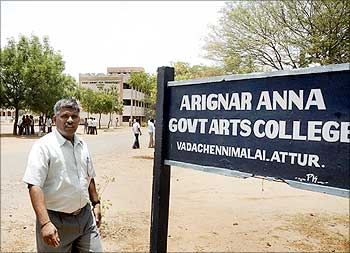 Image: Dr V Kathiresan at the college where he teaches.
Photographs: Vicky Nanjappa Vicky Nanjappa
V Kathiresan had to drop out of school to support his family. Years later, working for A P J Abdul Kalam as his driver, he was encouraged to restart his education.

Today he has a PhD, has written two books, and is a college lecturer. Vicky Nanjappa profiles this knowledge seeker as we continue our series on Extraordinary Indians.

Anything is possible or shall we say nothing is impossible. V Kathiresan's story proves that. This school dropout, who used to work as a driver for A P J Abdul Kalam, ensured that his dream turned into a reality at the age of 47.

A native of Vadachennimalai in Tamil Nadu, Kathiresan has come a long way with sheer determination. From being a school dropout, he went on to complete a PhD in history and was appointed a lecturer at the Arignar Anna Government Arts College in Vadachennimalai last year.

"I can never forget the role played by Kalamayya (sahib). I worked as a driver with him for five-and-a-half-years and during those long drives, I used to talk to him about my aspirations and dreams."

"One day while driving, Ayya suggested that I should resume my studies. He told me that the best way to go about it was through long distance education. Ayya used to lecture several students about the importance of education. I used to listen to him speak and got inspired." 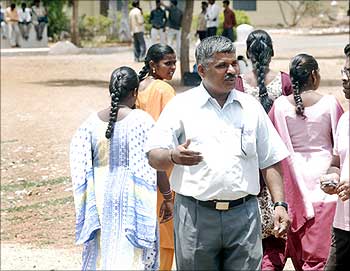 Image: Dr Kathiresan was encouraged by former President A P J Abdul Kalam to restart his studies.
Photographs: Vicky Nanjappa
It wasn't easy for Dr Kathiresan. After working at a 10 to 6 job, he would come home and study to catch up on all those lost years.

His struggle against the odds has become an example for his students. Santhosh Mani, a student at the college, says his teacher's story is like a fairy tale. "We complain so much about work load and the other burdens of life," says Mani. "Today I look up to him and tell myself that anything is possible. It is just a matter of dedication and effort."

Dr Kathiresan lost his father very early in life and had no choice but to support his family. Though he was always fond of studying, financial problems compelled him to drop out of school. "It was one of the most painful decisions of my life, but I accepted it as a way of life."

He trained as an electrician and joined the Indian Army in 1979. His first posting was in Bhopal, then Sikkim followed by Hyderabad.

He first met A P J Abdul Kalam at the Defence Research and Development Laboratory in the 1980s. Kalam was DRDO's director at the time and Kathiresan was deputed as his driver.

'If not for Dr Kalam, I would not have achieved this' 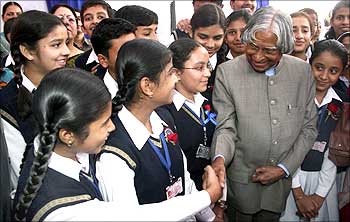 Image: Former President A P J Abdul Kalam with school children in Chandigarh.
Photographs: Ajay Verma/Reuters
"I must thank the Almighty that I was given such an opportunity," says Dr Kathiresan. "If not for Kalamayya's inspirational words, I would have never been able to achieve this. Even after Ayya left DRDO, I continued to ponder over what he said about the importance of education."

He started working towards completing his school education. He appeared for the Class X and then Class XII examinations privately and obtained a BA from Madurai Kamraj University through distance education. He then went on to do an MA in political science.

"I noticed that as the days passed, the urge to pursue higher studies started creeping into my system. I did my BEd followed by an MEd from Madras University and then an MPhil from Kamraj University. I then did law and finally a PhD from Manonmaniam Sundaranar University."

In 2001, he passed the teachers' recruitment exam, and was selected on merit. His first assignment as a teacher was at Kovilpatti where he worked for eight years. Apart from this he has written four books on history and a travel guide for the Tirunelveli district in Tamil Nadu.

"After completing my PhD, I called Ayya and told him that I had got a job also. The kind words and the appreciation that he gave me are more important than anything else in this world. He had faith in me and I did not let him down."

Dr Kathiresan cannot forget the role his wife Kasthuri played in his entire struggle. A teacher herself, she was a rock through his difficult times. The couple have decided to ensure that their son Raghavan, who is in Class XII, gets sound academic grooming.

Grateful that he had Kalam as a mentor he now wants to help other students who have not had a chance to complete their education. "I would be only too glad if I could pass this on to several students who have the urge to learn and strive to be the best."