The most powerful women politicians in the world 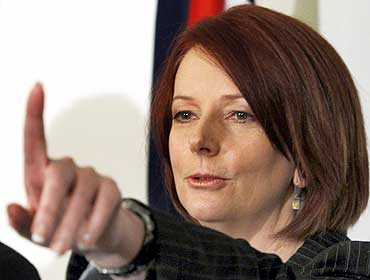 Julia Gillard recently became Australia's first woman prime minister after she managed to oust Kevin Rudd, who was forced to step down as the ruling Labour Party's leader at a ballot meeting.

Rudd avoided a vote, fearing a humiliating defeat at the hands of his deputy PM Gillard, who reportedly had 70 of the 115 votes.

Gillard is a noted parliamentarian and a formidable leader of the party's Left faction. She is known for her outspoken views on labour rights, women's issues and involvement with student politics.

A lawyer by profession, she had earlier been in charge of various ministries including health, education, employment and immigration.

As Gillard created history as Australia's first woman PM, rediff.com takes a look at the most powerful woman politicians across the world, who have increasingly made their presence felt in a man's world. 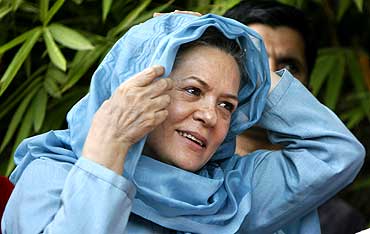 Technically, Sonia Gandhi doesn't hold any position in the government of India and has no say in its affairs. In reality, she is the most powerful political leader in the world's largest democracy and is often referred to as the 'remote control' behind the functioning of the Congress-led United Progressive Alliance government.

At a recent press briefing, Prime Minister Manmohan Singh admitted that he met Gandhi 'at least once a week' to discuss various issues with her. Political observers have predicted that the National Advisory Council, put together by Gandhi and comprising her hand-picked lieutenants, is all set to function as a 'Super Cabinet' on its own.

She had faced stiff opposition and skepticism from senior leaders of her own party due to her foreign origins. But Gandhi has managed to shut her dissenters up with her impressive political acumen and ability to sidestep major controversies. Staring off as the primary member of the Congress in 1996, today Gandhi is considered one of the most powerful women in the world.

In theory, the PM takes care of all administrative and policy related issues, while Gandhi is supposed to manage the various factions of the coalition. But it is a known fact that no decision or policy of the UPA government is finalised without the nod of 10, Janpath (her home).

As a political commentator recently pointed out, Gandhi has managed to capture the enviable position of absolute power, but zero accountability. When a government initiative succeeds, Gandhi gets the credit. When the UPA government flounders, Dr Singh takes the blame. 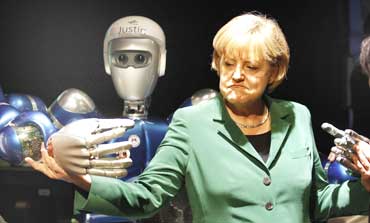 Dressed in her trademark stiff business suits, Germany Chancellor Angela Merkel is often the only woman among the world's most powerful men at the summits of the powerful G20 and G8. After former British Prime Minister Tony Blair, she is probably the most influential leader to emerge out of Europe in the last decade.

She is not only the first woman chancellor of Germany; she is also the first head of state who hails from the formerly Communist east.

Merkel beat anti-incumbency to return to power for a second term in 2005. She is known for her brand of pragmatic politics and maintaining the balance of power in a coalition. She has also been praised for steering Germany through its recession blues. Merkel managed to command an impressive 70 per cent approval rating during her second term.

In its January 2010 issue, Time magazine called her 'a trailblazer and the unchallenged leader of Europe's largest economy'.

In an unusual ode to Merkel, toy manufacturer Mattel brought out a Barbie doll modelled after the Chancellor last year, explaining that "she's simply a good role model for girls around the world." 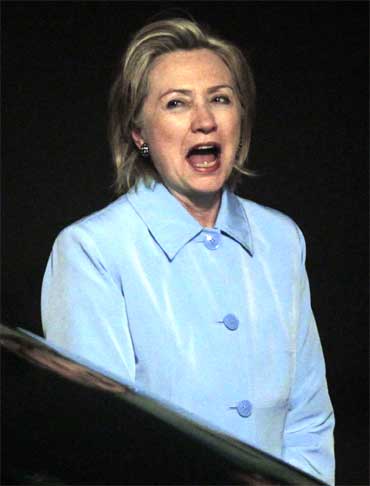 When then First Lady Hillary Clinton chose to forgive her husband and then United States President Bill Clinton over his affair with White House intern Monica Lewinsky, political observers had snidely commented that her decision had less to do with spousal affection and more to do with her own presidential aspirations.

So nobody was really surprised when Clinton announced that she will run for the US President's post in the 2008 elections and sought to secure the nomination of the Democratic Party.

But the New York Senator's dream run was marred by the meteoric rise of Illinois Senator Barack Obama, who won the party's presidential nomination and went on to create history as the first black President of the country.

Though they had fought bitterly during the presidential primaries, Obama offered the olive branch to Clinton by giving her the extremely powerful post of Secretary of State. In the 18-month tenure of the Obama administration, Clinton has emerged as the second most influential leader in Washington after the President.

As the person in charge of salvaging America's image and maintaining its fragile ties with allies and foes alike, Clinton has displayed acute political acumen and diplomatic skills in her new job. She has batted for tougher sanctions against Iran, warned Pakistan about its terror links and chided North Korea over its nuclear programme.

Her gritty and no-nonsense attitude has seen her approval ratings rise remarkably while her boss' ratings slumped over his handling of the economy. 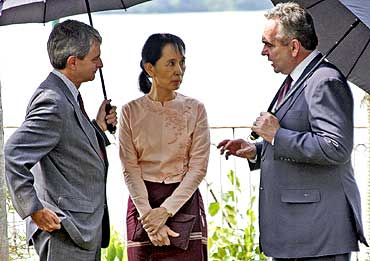 She is an icon of democracy in the modern world and an inspiration for millions across the globe. Aung Sung Suu Kyi has faced persecution in various forms for over 20 years for daring to raise her voice against the oppressive regime of the notorious junta in Myanmar. But she has refused to give up her fight for democracy in the impoverished nation.

When Suu Kyi's party National League for Democracy secured a landslide victory in the general election in 1990, the military refused to hand over power and put her under house arrest. Suu Kyi has been put under house arrest, imprisoned in the infamous Insein Prison and has even been kept under secret detention for long spells

In spite of the junta's brutal ways of suppressing democracy in the country, Suu Kyi, a staunch follower of Mahatma Gandhi, has refused to let go of her non-violent protest.

In recognition of her valiant fight for freedom, she was awarded the Nobel Peace Prize in 1991 and the Mahatma Gandhi Peace Award in 2009.

Myanmar has repeatedly ignored pleas by the United States and the United Nations to free Suu Kyi, whose health has reportedly deteriorated due to her continuous house arrest. It even turned down UN Secretary General Ban Ki Moon's plea to visit the leader during his visit to Myanmar in July last year.

In 2009, the junta convicted Suu Kyi of violating internal security law and sentenced her to three years in prison with hard labour, but it was swiftly commuted to 18 months of house arrest. 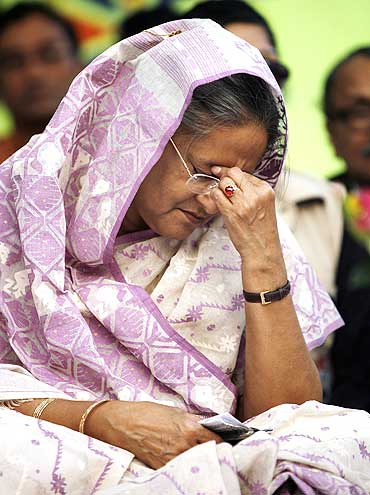 Sheikh Hasina's fate was sealed on the night of August 15, 1975, when her father and Bangladesh founder Mujibur Rehman was assassinated by a group of army officials during a bloody coup. Her mother and three brothers were killed as well, and Sheikh Hasina survived as she was visiting Germany at that time.

She returned to Bangladesh six years later as the chief of Awami League and began a movement for the restoration of democracy in Bangladesh. She advocated an end to the military regime in the country which had witnessed years of bloody coups and political instability. She was put under house arrest several times by the military regime.

Hasina finally won the general elections held in 1996 after defeating arch rival Khaleda Zia of the Bangladesh Nationalist Party. Her first stint as PM was marked by controversy and extreme levels of corruption, and she suffered a humiliating defeat in the 2001 polls.

In the period between 2001 and 2008, Hasina faced trial for corruption, murder and extortion. She also faced assassination attempts and was forced to remain in exile by the interim administration.

She finally returned to Bangladesh in 2007 and led her party to a stupendous victory in the 2008 general elections.

Currently the only female head of state in South Asia, Sheikh Hasina has a number of serious challenges to contend with. Her government has to tackle rampant unemployment, a slew of natural calamities, the constant threat of a coup by the military, violent protests by the opposition, high levels of corruption and a rise in terrorism. 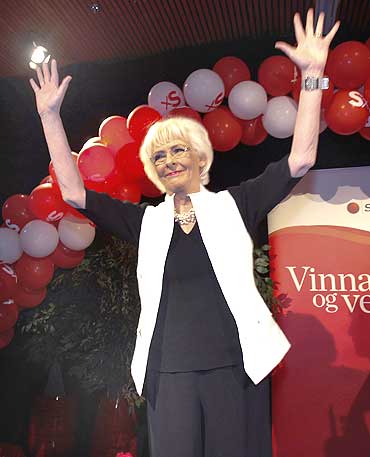 Johanna Siguroardottir, the prime minister of Iceland, is the world's first openly homosexual head of state. She is also the longest serving parliamentarian in the history of that country and has served as the minister of social affairs for several years earlier.

Siguroardottir took over as the PM in 2009, when Iceland was going through a tumultuous phase due to the global meltdown and crippling inflation rates. She was elected to the top post due to her favourable approval ratings and sound Left-liberal policies.

Siguroardottir, a former flight attendant, has been married to her partner Jonina Leosdottir since 2002. 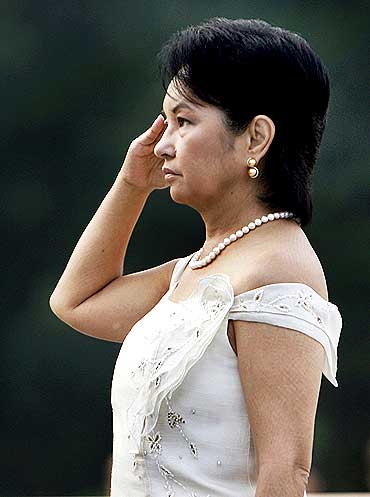 Gloria Macapagal-Arroyo, the president of Philippines, is one of the most powerful woman politicians in Asia. Daughter of former Philippine President Diosdado Macapagal, she is currently serving the last few days of her 10-year-long presidency.

The former professor of economics, who served as a vice president in President Joseph Ejercito Estrada's government, became the head of state after the latter had to step down over corruption charges in 2001.

Arroyo's long stint as president has been marked with controversies and numerous coup attempts by the army and opposition supporters. Though she has successfully quelled the protests, the Philippines president has often been accused of curtailing the freedom of the press and misusing her powers. She, along with her family, has faced extensive corruption charges.

Arroyo has even been accused of getting breast implant surgery with the taxpayer's money! 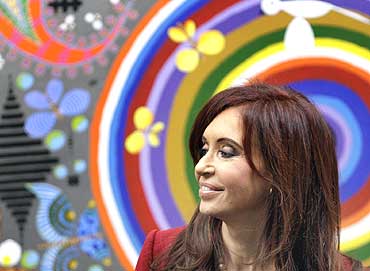 The most powerful woman politician in South America has attracted both criticism and praise for her controversial policies on agricultural subsidies, bank reforms and economic recovery. Kirchner has also helmed the country during a diplomatic row with the United States.

She has also lived up to her aggressive image by getting embroiled in frequent run-ins with influential media houses and the armed forces. Kirchner has developed strong and friendly ties with a number of countries during her term, including Russia and Vietnam.

But both Kirchner and her husband have faced charges of massive corruption, after it was revealed that their collective assets had multiplied by over 500 times since she came to power in 2003. Kirchner has also been accused of being overtly conscious of her image. She is known for her penchant for designer clothes and once famously commented that 'grilled pork is better than Viagra for sex'.