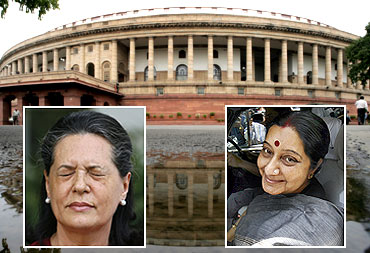 The Women's Reservation Bill has managed to evolve a consensus among the three perpetually bickering factions of Indian politics -- the Congress, the Bharatiya Janata Party and the Left front.

The bill, which will reserve 33 per cent seats for women in Parliament and the legislative assemblies, was passed by the Rajya Sabha on Tuesday. The bill is expected to face a stormy reception in the Lok Sabha, with various regional parties determined to fight it tooth and nail.

Incidentally, India, the largest democracy, lags much behind other countries including its neighbours Pakistan and Afghanistan, when it comes to the participation of the fair sex in politics.

With only 10.8 per cent of women representation in the Lok Sabha and 9 per cent in the Rajya Sabha currently, India ranks 99th among 187 countries, according to the comparative data by the Inter-Parliamentary Union. The IPU is an international organisation that works for promoting democracy, peace and co-operation among people in the world.

At present, India has only 59 women representatives out of 545 members in the Lok Sabha, while there are 21 female MPs in the 233-member Rajya Sabha.

Which are the countries that rank better than India in terms of reserving seats for women in the Parliament and boast of a higher number of female lawmakers? Click on the NEXT link to find out more 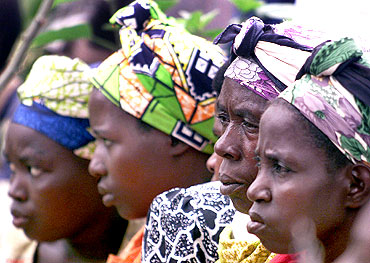 Image: Rwandan women listen to proceedings at the first session of a new court system aimed at letting ordinary people judge those accused of killing their families and friends during the 1994 genocide
Photographs: Antony Njuguna/Reuters

Rwanda has beaten 186 other countries in the world to become the nation with the highest number of female parliamentarians.

After an election held in September 2008, the tiny East African nation became the first in the world where women hold the majority in parliament -- 56 per cent seats are controlled by the fairer sex. The high-profile posts of foreign minister, education minister, supreme court chief, parliament speaker and police commissioner general are also held by women.

The Rwandan genocide of 1994 -- in which a Hutu-dominated government encouraged thousands of militia men to kill, rape and pillage the minority Tutsi community and even the moderate Hutu population -- ravaged the country and left a demographically uneven population with 70 per cent females.

In 2003, President Paul Kagame implemented a new law reserving 30 percent of all parliamentary and cabinet seats for women.

Sweden: The most gender balanced parliament in Europe 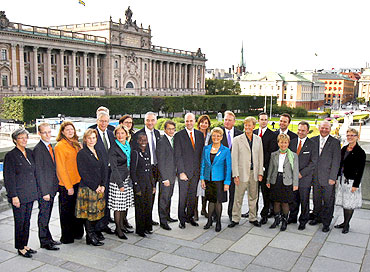 The Swedish parliament or the Riksdag is the most gender-balanced one in Europe. Of the 349 parliament members, as many as 164 (46.4 per cent) are women. Sweden ranks at number 2 in the IPU list.

Most parties in Sweden, including the leading parties of Liberal Party and Social Democrats, have enforced quotas for women within their own parties.

Afghanistan: Women lawmakers have no rights 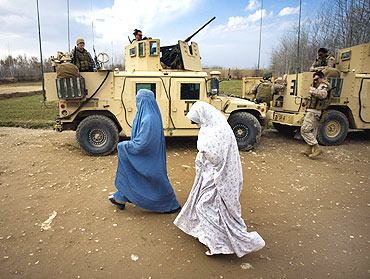 With 27.3 per cent women parliamentarians, even Afghanistan currently fares better than India on the IPU list.

According to the country's constitution, two seats in every province have to be set aside for women, and 64 of the 249 lawmakers are female.

But even with one of the highest percentages of female lawmakers in the world, the women in Afghanistan are seldom heard, thanks to the conservative and fundamentalist leanings of the country's male-dominated society.

Most female lawmakers claim that they are seldom allowed to speak in the parliament, and even when they get a chance to do so, their opinions are ignored.

The Afghan parliament is dominated by men who are former warlords or jihadis, and they exclude the women from the decision-making process.

Ironically, even women MPs in Afghanistan are not allowed to leave their house and work unless a male member of their family gives them permission to do so. 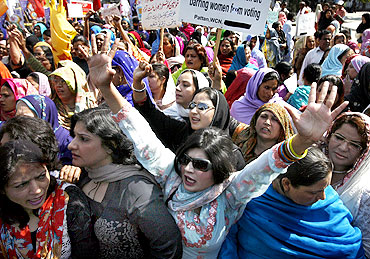 Pakistan, with 22.2 per cent women in its Parliament, fares better than United States or United Kingdom in the IPU ranking, and is placed at no. 49. But female MPs often complain about not being taken seriously and of being ignored by their political peers.

However, some important legislations like a bill against honour killings and another on women's rights have been passed in parliament as the female MPs, including Speaker Fehmida Mirza, cut across party lines to throw their weight behind these bills.

According to the Pakistan constitution, 20 per cent of the seats in both the upper house and the lower house of the parliament should be reserved for women. However, women politicians have been demanding 33 per cent reservation in the legislative bodies.

US: Champion of democracy lags behind 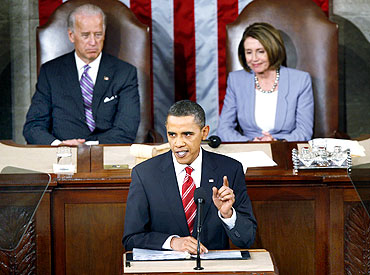 United States, the champion of democracy in the free world, ranks at a dismal 74th place in the IPU list. It lags behind Afghanistan, Pakistan, Israel, Iraq, Venezuela and arch-rival Cuba, which is at an enviable no. 4 slot.

Since its establishment in 1789, there have been only 38 women in the United States Senate, which has a 100 seats. Today, only 17 of the 100 US Senators are women. Significantly, 13 are Democrats and four are Republicans. However, the powerful position of the Speaker of the United States House of Representatives is held by a woman, Nancy Pelosi, who is the third in the presidential line of succession.

Till 1992, only one woman had been elected to the Senate at a time, and there had been entire four-year terms when there was not a single female lawmaker in the legislative body. In 1992, the senators elected from North Dakota, Kansas and Maryland were all women, making it a historical year.

Till now, 229 women have been elected to the House. Currently, there are 75 elected representatives in the House, comprising 17.2 per cent of the total 435 legislators. 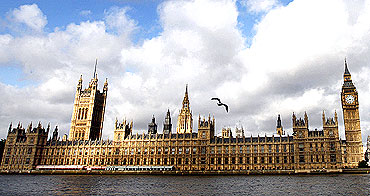 Image: Britain's Houses of Parliament as seen across the river Thames in London
Photographs: Stephen Hird/Reuters

United Kingdom, America's partner-in-spreading-the-message-of-democracy-for-all, fares marginally better on the IPU list with 19.5 per cent female representation in its legislative bodies. It is ranked at number 62.

Women in Britain first struggled to get the right to vote and then to contest elections. In the 2005 general election, 128 women were elected for the 646-member strong House of Commons, the highest number of women being elected in British parliamentary history.

According to parliamentary records, it took over 50 years of campaigns and debate before women were allowed to vote in British elections.

Incidentally, the first three women MPs to take oath in the British Parliament were all elected for seats which had been held by their husbands. 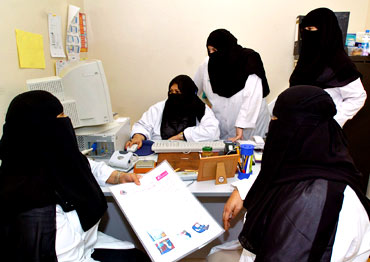 Not surprisingly, the Gulf countries of Oman, Qatar and Saudi Arabia rank at the bottom of the list.

According to the IPU list, there are no women in the parliaments of these countries, which ironically boast of female ministers in their governments.

Saudi Arabia, US' no.1 ally in the Middle East, doesn't allow women to work, drive or obtain a passport without the consent of male relatives.

Qatar, which does not even have an elected parliament, has recently chosen a women for a ministerial post for the first time.

In 1994, Oman became the first Arab country to grant women the right to vote and contest for elections. However, according to the IPU, no women were elected to the parliament in the elections held in October 2007.