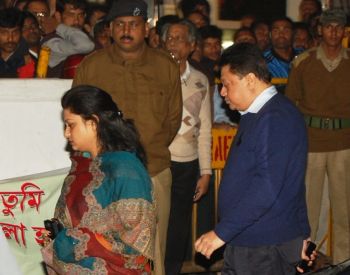 The man who could have become the prime minister of India, but missed the tryst with dynasty is no more.

Jyoti Basu's death has moved the nation because he had the greatest political quality that's now fast diminishing. Giving him glorious tributes on Sunday, even his political opponents acknowledge that he had political credibility like none other.

Prime Minister Manmohan Singh said that the death of the 95-year-old Communist Party of India-Marxist leader marked the end of an era in Indian politics, while Congress President Sonia Gandhi gave him credit for being the architect of the first United Progressive Alliance government.

The depth of sorrows and the intensity of respect on his demise are reflected clearly in the tributes that are pouring in.

It speaks volumes for the life that Basu lived for 95 years. 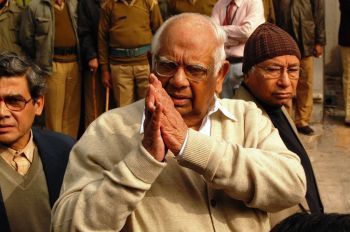 He exits with an unbeatable and enviable record. He served as chief minister from 1977 to 2000. He was the longest serving chief minister of India. It was a dream innings that will be difficult to surpass in an era of tweeting ministers and TV-addicted followers.

The most enviable achievement of those 23 years was that the highly emotional people of West Bengal witnessed communal harmony and law and order was exemplary.

Today, the politburo of his party, of which he was founder member in 1964, paid an extraordinary tribute to him. It said, "One has to recall how as chief minister he dealt with the situation after the assassination of Indira Gandhi in 1984, when violence against Sikhs broke out in various parts of the country, but nothing was allowed to happen in West Bengal. Similarly he dealt firmly with efforts to instigate trouble after the demolition of the Babri Masjid in 1992." 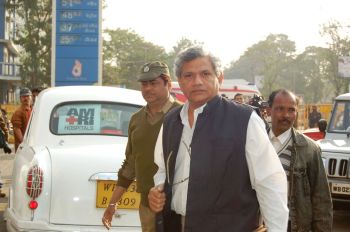 Basu came from a family that was not actively involved in politics. He was born on July 8, 1914, at Kolkata.

His father Nishikanta Basu and mother Hemlata Devi lived in Kolkata, though their ancestral home was in village Bardi in Dhaka, Bangladesh.

Nishikanta Basu was an eminent homeopath doctor. He spent most of his life at the family house in Hindusthan Park in south Kolkata.

Jyoti Basu has said that his first moment of reckoning was when he was inspired by the Chittagong armed rebellion led by Surya Sen in 1930. He was young and impressionable then.

After that life was never same again for this stylish Bengali.

In 1935, he went to England to study law. During his university days, he joined Left wing groups which forged his mindset that remained vehemently against fascism till his death on Sunday morning.

He was a member of the famed India League, a body of Indian students opposed to British Imperialism.

He joined the Communist Party in 1940 on his return from England and got registered as a barrister in the Kolkata high court, but never practiced law.

Rather, he joined politics and got elected to the Bengal Provincial Assembly in 1946 from the Railway Workers' Constituency.

He told his family and friends that he would work for the "oppressed masses" and started as a trade union leader of workers of the Indian Railways. 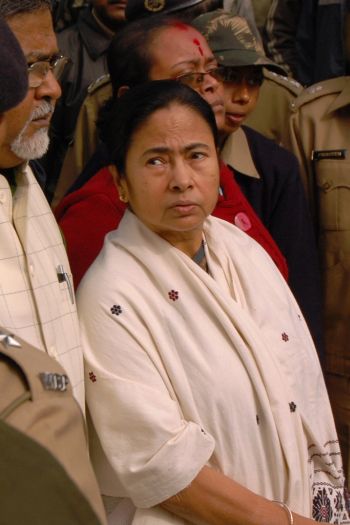 In no time, Basu became the people's leader. He was popular, affable and brilliant.

He played crucial role when Bengal was passing through turbulence during the Tebhaga Movement and during aggressive workers' strikes.

He was always on the streets or fields in villages -- always in the thick of things. He had no two minds about his goal.

He didn't need Three Idiots to tell him "to do" in life "what you like".

The rare and costly law degree could go to hell. He was the trendsetter for all the people, who wanted to work for the underprivileged.

As trade unionists S Ramachandran Pillai and K Varadha Rajan of the All India Kisan Sabha aptly said in their tributes that Basu showed how Communists could effectively use parliamentary fora to strengthen struggles of the toiling masses.

The Communist Party of India (Marxist) was formed in 1964, when the leaders of the Communist movement fought on ideological issues.

Basu was the last surviving member of the 'Navaratnas', the nine members of the first the politbureau of the CPI-M. 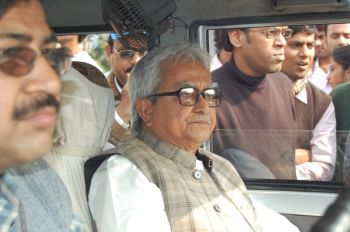 M J Akbar, distinguished journalist and author had an intimate association with Basu.

While paying tributes to Basu, Akbar told rediff.com, "His contribution was enormous in building the party since 1964. His great achievement was that he gave a template for the Left political movement in the nation. Look, what happened to the three divisions of the Left party in 1964. The CPI went the pro-establishment and pro-Congress way. The Naxalites went towards Chairman Mao's ways. But Harikrishna Konar, Pramod Dasgupta and Jyoti Basu built up the CPI-M."

He also showed the way to work within the framework of the bourgeois economic system. He knew that you can't do it by demolishing that system."

From 1964 to 1977 he fought the Congress government tooth and nail by condemning it as the "fascist force".

He led from the front with undiluted ideology. From 1977 onwards Basu's legacy saw many highs and lows.

His most memorable achievement was that his government introduced fantastic pro-people measures for exploited class and poor farmers.

Basu led the Left Front coalition government, brought about land reforms that gave land to around 80 percent of the rural population in Bengal.

Poor toilers became owners of land. That was the real end of feudal raj in West Bengal. By an act of law, he protected "the rights of the Bargadars". 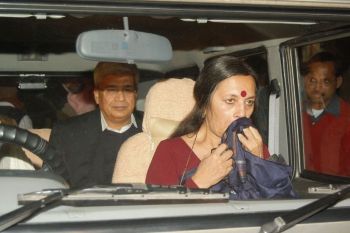 The sophisticated wine-sipping Basu ran the nation's first successful coalition without many hiccups or break-ups.

Three, much before it became fashionable he gave more power to local bodies and founded India's first ministry of environment.

Ashis Nandy, political psychologist and sociologist agreed. "Basu's greatest achievement was land reforms. This was the best that the Marxist theory could produce with their ideology. With his skill Basu could negotiate land reforms in a highly competitive political world."

But his achievements remained underperformed.

Akbar said, "He brought land reforms and that helped in redistribution of wealth in West Bengal. But, then, his government got stagnated and his party, too. His party could not build up from there."

In 1996, Jyoti Basu's name was proposed by the secular allies for prime ministership. But the CPI-M Central Committee decided to support the government from outside.

Later, Basu regretted his party's decision saying that it was a "historic blunder".

He said, "As a Communist prime minister of democratic India, just half a decade after the implosion of the Soviet Union, Basu would have influenced not just his country but the world."

Some Left-party sympathisers believe that Basu's tenure as prime minister would have helped fill the vacuum created by unequal opportunities. It would have contained the rise of the Naxalites, somewhat.

Akbar said, "The Left needed a quantum leap from regional satrapies by offering leadership to the underprivileged and marginalised through the colossal power of a prime minister."

Surely Basu had political credibility to go by. But some analysts think that his government would not have lasted even a year. 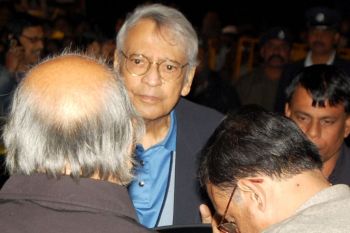 Vinod Sharma, political editor of Hindustan Times, told rediff.com, "In terms of stature, the way Jawaharlal Nehru helped the Congress and A B Vajpayee helped the BJP overcome ideological rigidity, Basu helped the CPI-M to build wider consensus in the Indian political spectrum."

Basu could not become prime minister in 1996, but by 2000 he left active politics.

Swapan Dasgupta, distinguished commentator and a sharp critic of Basu, told rediff.com, "Basu's legacy is negative. His rule took West Bengal out of the mainstream of development in India. In 1967, when he became deputy chief minister in the United Front government the state was competing with Maharashtra for the top slot. But, when he left in 2000 West Bengal was at the bottom of development and competing with smaller states."

Swapan said he also disagrees with the view that feudal system ended in West Bengal when Basu introduced land reforms. He said when zameedari system got abolished in 1952 the process began to end the feudal system.

He said, surely, Basu's initiative gave "land to the tiller" but that act of "redistributing wealth" failed in absence of any serious efforts in "regeneration of wealth" which brought stagnation in economy. 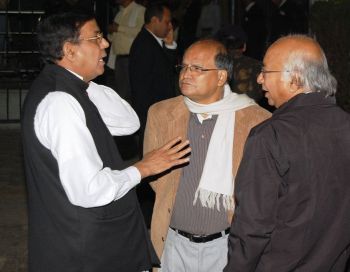 But at the end of the day, no one disputes that Basu was a colossus as a political figure. He had a great personality to carry the masses with him, he had the leadership quality to survive half a century without blemishes, and he wielded total power when he ruled.

He had the intellectual capacity to absorb opportunities but West Bengal till today does not boast of great development.

What was the reason that the great leader did not take West Bengal the China way? Why he could not provide leadership as Marxist Premier Deng Xiaoping provided to China to uplift his nation from poverty?

Nandy explained, "Because Basu had a colonial education. Indian Marxists took Marx literally; they took it as a gospel European truth. Indian Marxists could not take risk as Chinese did or even the Russians did. China or Russia were not directly colonised. They could play bigger game by modifying the Marxist text. They used Marx creatively. They didn't have a colonial mindset.

"I would say Basu's life was the tragedy. He could not take land reforms further to play the bigger game because he himself, his party and it's leaders were a product of a colonised Indian society."