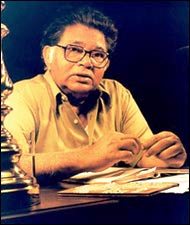 Veteran Marxist leader Jyoti Basu breathed his last at a private hospital in Kolkata on January 17.

The city came to a standstill as thousands of people joined the Communist Party of India-Marxist patriarch's last journey from the hospital to Peace Haven, where Basu's body will be preserved.

Nothing influences the youth more than powerful political leaders. When we were young, we saw two stalwarts -- both former chief ministers -- Bidhan Chandra Roy and Jyoti Basu crossing political swords.

Though Basu was a man of shorter stature compared to Roy, that did not stop him from speaking his mind or putting forth a voice of opposition.

I am talking about the 1950s and the 60s. Congress was the only prominent party that people put their faith in at that time.

Yet, one could feel the slow emergence of a Leftist politics. In fact, Basu was spearheading the Leftist movement in Bengal. As youth, we were witnessing a slow yet steady shift in the state's political ideology.

With time, people started seeing in Basu a leader who was a people's man to the core. He consciously tried to be one of them. Till his very last day in politics, Basu urged his comrades never to alienate from the people.

In fact, I think had Communist Party of India-Maxist gone by his words, it would not have faced such a humiliating defeat in the last Lok Sabha election.

Basu had a natural grace. He was a great statesman, a true politician. He was quiet, efficient and a balanced individual, someone his party could always depend on.

Everything about him was perfectly timed. Be it launching a movement or quitting mainstream politics, Basu always did the right thing at the right moment. Who can forget his dignified way of handing over Bengal's reins to Buddhadev Bhattacharjee?

I just can't forget my last meeting with him. Two months back, I met him at his residence. I was stunned by his alertness. Though he needed help to move around, he could recognise me.

It seemed he was depressed and it pained me. To see the leader whom I admired so much in my youth in such an emaciated state was not a pleasant experience.

Basu's last words still reverberate in my ears: 'I am wearing glasses, yet can't see anything, I am using an earphone, yet can't hear, my hands shake and they don't allow me to write. What's the use of such a life? Don't know when and how I will die'.

I was stupefied by his helplessness.

Basu, a Marxist and a colossus