No improvement in Basu's condition; AIIMS endorses line of treatment 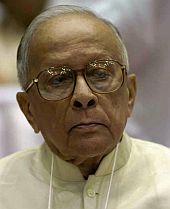 There was no significant improvement in the condition of Marxist veteran Jyoti Basu, battling pneumonia at a Kolkata hospital for the eighth day on Friday, with his line of treatment being endorsed by specialists of All India Institute of Medical Sciences.

Apparently, a bronchoscopy conducted on him revealed that bacteria named Aceneto Bactro have affected Basu. The doctors now believe that with the identification of the particular bacteria, he will be treated with the appropriate anti-biotics to counter the bacteria.

"His condition remains the same and there has been no significant improvement since the last bulletin issued at 11:30 am," AMRI Hospital Executive Director D N Agarwal said, while issuing the 7:00 pm bulletin.

In response to Prime Minister Manmohan Singh's offer of assistance for Basu's treatment, the medical board of the AMRI hospital had a video-conference with AIIMS specialists at the joint efforts of Prime Minister's and the Chief Minister's office, he said.

Agarwal said that the specialists from AIIMS conveyed their full satisfaction on the line of treatment for Basu's recovery. Specialists from both the hospitals had admitted that the main hindrance was Basu's advanced age.

The heartbeat of 95-year-old leader turned irregular last night and he was on partial ventilator support during the day.

"Last night there was an episode of irregularity of heart beat which was treated adequately," he added.

Mamata calls on Basu in hospital