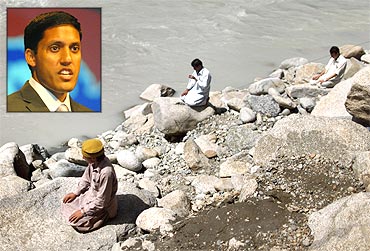 Dr Rajiv Shah, administrator of the United States Agency for International Development and the highest ranking Indian American in the Barack Obama administration, while speaking on  the devastating floods in Pakistan, said, "The scale and scope of this natural disaster is astronomical."

Shah, who just returned from Pakistan after overseeing US relief efforts, briefed journalists at the Foreign Press Centre in Washington. He pointed out that "there are more than 20 million Pakistanis that are affected by the floods throughout the country," and estimated that "perhaps more than 9 million people are in need of immediate support, whether it is food, clean drinking water, medicines, a safe place to stay, shelter for children and families." 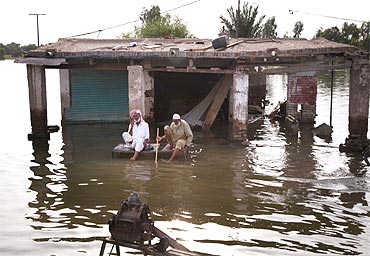 The 38-year-old physician, who also holds a PhD in public health policy, was one of the most senior development officers at the Bill and Melinda Gates Foundation before joining the Obama administration. Since his appointment less than a year ago, he has supervised the recent Haiti earthquake relief efforts and is now acting as the Obama administration's point man for America's flood relief efforts in Pakistan.

He said, "If you just pause to reflect on that size and scope in terms of the humanitarian needs, and the fact that it is spread out over a land mass that is larger than the country of Italy, it gives you a sense of some of the logistics and operational challenges that will be confronting and will continue to confront the overall relief effort."

'The floods have submerged 4.3 million acres' 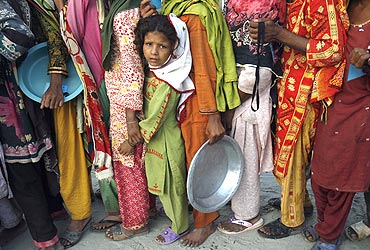 Image: A flood victim stands in queue with others to get food handouts at a relief camp
Photographs: Athar Hussain/Reuters
Shah predicted, "In addition to the humanitarian consequences, which of course are tragic, the economic and social impact of this flood is going to be felt for a significant amount of time."

Shah said that the US has been at the forefront of the international humanitarian relief efforts and the "total commitment for the immediate relief and early recovery" was $200 million." 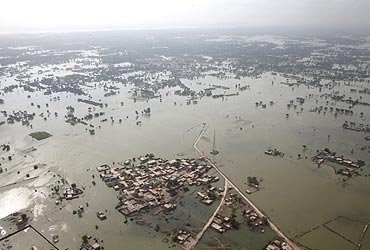 Image: An aerial view shows a flooded village in Rajanpur district of Pakistan's Punjab province
Photographs: Reinhard Krause/Reuters
He was full of praise for Lieutenant General Nadeem Ahmad, "who has experience working to support the earthquake response in 2005 and the person who has set up the National Disaster Management Authority with USAID support, who is leading the effort."

"This is the first natural disaster in which the Pakistani leadership is actually setting the strategic direction and leading the operational response through the NDMA," Shah said.

Shah said that besides Nadeem, which whom he had traveled north through Swat Valley to Kalam and observed the tragedy first-hand, he had also met President Asif Ali Zardari, Foreign Minister Mahmood Qureshi and Pakistan's Ambassador to the US Husain Haqqani.

'We can build back a better and more resilient economy' 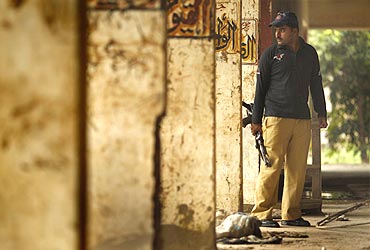 Image: A policeman inspects the flood destroyed police headquarters in Nowshera
Photographs: Tim Wimborne/Reuters
"We have noted that this will require significant resources and a significant partnership with the international community," he said, and made clear that he had "highlighted the need for transparency and accountability in how those resources are spent, so that taxpayers around the world, including those in Pakistan, are both making commitments to this effort and knowing that those commitments are achieving real results for the Pakistani people."

Shah acknowledged that "while it is hard at this time of tragedy and when you see the scale of this disaster, to fully internalise the concept that we can in fact build back a better and more resilient economy and society in areas that have been affected." it was worth noting "a particular example from the earthquake response that USAID conducted together with the people of Pakistan."

'USAID worked for many years after the earthquake' Image: Flood victims show their ID cards to receive food rations at a distribution centre
Photographs: Reinhard Krause/Reuters
He recalled that this earthquake in 2005 had ended up killing more than 79,000 Pakistanis "and was a tragedy of significant proportion at that time," but noted that "USAID worked for many years afterwards to mount a significant relief, recovery and reconstruction effort."

"And, in just one example, in education," he added, "we helped, together with Pakistan, build 56 schools back to a higher than usual earthquake and seismic standard that has currently provided effective education to more than 20,000 Pakistani children and has also actually helped set up local construction firms than can meet earthquake construction standards, to build a more resilient and disaster-proof environment."

Thus, Shah said that "while it's hard to imagine that those things are possible, it is possible to build back better," and declared that this would "be a big part of the focus for the ongoing recovery and reconstruction."
More