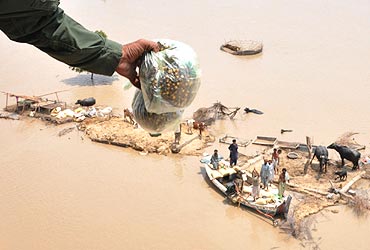 Climate change experts are of the view that global warming predictions are correct and the world weather crisis that is causing floods in Pakistan, wildfires in Russia and landslides in China is evidence of that.

The torrential rains have affected almost 14 million people in Pakistan, making it a more serious humanitarian disaster than the South Asian tsunami and recent earthquakes in Jammu and Kashmir and Haiti combined.

The disaster was driven by a 'supercharged jet stream' that has also caused floods in China and a prolonged heat wave in Russia, The Telegraph reported. 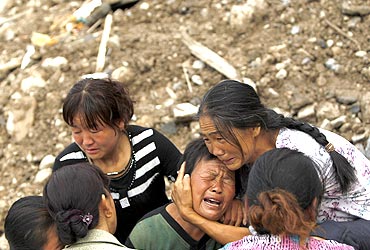 Experts from the United Nations and universities around the world said the recent 'extreme weather events' prove global warming is already happening.

Jean-Pascal van Ypersele, vice-president of the body set up by the UN to monitor global warming, the Intergovernmental Panel on Climate Change, said the 'dramatic' weather patterns are consistent with changes in the climate caused by mankind.

"These are events which reproduce and intensify in a climate disturbed by greenhouse gas pollution. Extreme events are one of the ways in which climatic changes become dramatically visible," he said. 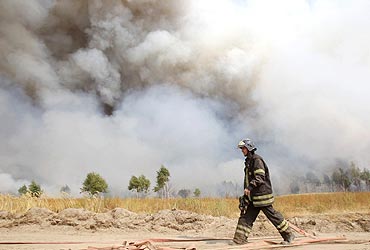 Image: A firefighter walks in a field while smoke from a wildfire cloud the air outside the settlement of Kustarevka in Ryazan region of Russia
Photographs: Denis Sinyakov / Reuters

The UN has rated the floods in Pakistan as the greatest humanitarian crisis in recent history, with 13.8 million people affected and 1,600 dead.  Flooding in China has killed more than 1,100 people this year and caused tens of billions of dollars in damage across 28 provinces and regions.

In Russia the morgues are overflowing in Moscow and wildfires are raging in the countryside after the worst heat wave in 130 years.

Dr Peter Stott, head of climate monitoring and attribution at the London Met Office, said it was impossible to attribute any one of these particular weather events to global warming alone.

But he said there is 'clear evidence' of an increase in the frequency of extreme weather events because of climate change.