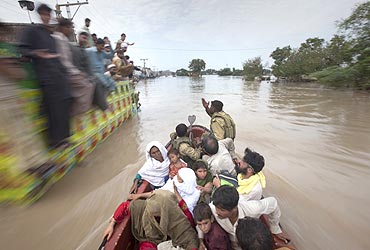 At least 30 lakh people have been affected by the devastating floods in Pakistan and most of them have not received any aid, the United Nations Children's Fund has said.

The UN said the "worst floods in 80 years" had exposed thousands of people to diseases and had swept away entire villages leaving the poeple marooned.

The AFP has reported that more rains were likely in the region which could worsen the situation. Many roads and highways have been submerged leaving many areas of the country isolated. 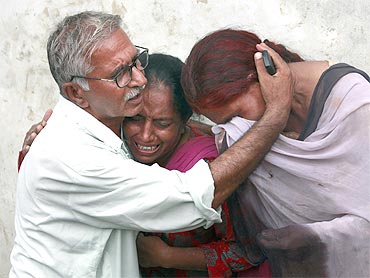 Image: A man consoles his family after they returned to find their homes destroyed by the floods in Nowshera, Khyber-Pakhtunkhwa Province, on August 3
Photographs: Faisal Mahmood/Reuters

Authorities involved in relief operations said on Monday that the number of those killed in the province over the past five days might have crossed 1,500.

About 30,000 troops have been deployed for the relief effort across the country.

"We have few helicopters, most of them provided by the army, to carry out rescue and rehabilitation activities and there are a number of areas which remain unattended. Tens of thousands of people are stranded and waiting for help," a senior official, who preferred not to be named, said.

Flood has washed away villages 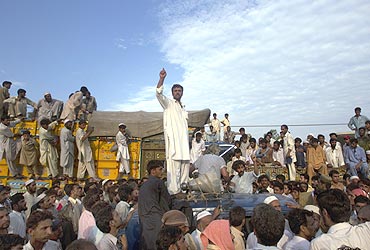 Image: A man requests aid for flood victims amidst passengers and cargo trucks which were halted by townsmen requesting relief supplies in Nowshera on August 2
Photographs: Adrees Latif/Reuters

Following an aerial survey of affected areas in Khyber-Pakhtunkhwa, a spokesman for the Provincial Disaster Management Authority described the destruction as "massive". He said entire villages and grain storages had been washed away.

The military said 28,000 people in the worst-hit areas had been rescued though thousands more remained stranded.

'US committed to Pak beyond war on terror' 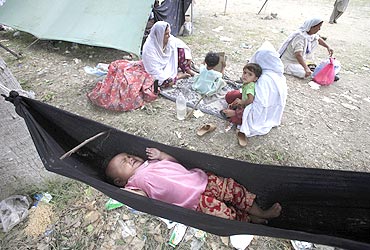 Image: A child lay crying in a hammock after flood victims shifted to camps to take refuge after their homes were destroyed in Nowshera on August 3
Photographs: Faisal Mahmood/Reuters

The United States has announced additional aid for flood relief work in Pakistan and launched a campaign, through short message service, asking its citizens to donate generously for this humanitarian cause as President Barack Obama believes US' commitment to Islamabad is far beyond fighting extremism.

"The (US) president recognises the importance of allies helping allies in times of need. Our relationship with Pakistan goes far beyond our shared commitment to fight extremists," National Security Council spokesman Mike Hammer said in a statement.

"The US government stands ready to continue to assist Pakistani authorities address the difficult challenges posed by this natural disaster," he said, adding President Obama is being kept fully informed on the evolving situation and the potential impact to well over one million Pakistani citizens.

"The US government was immediately in contact with the Government of Pakistan to coordinate our support of their response effort and to ensure aid reaches those who need it most as quickly as possible," he said. 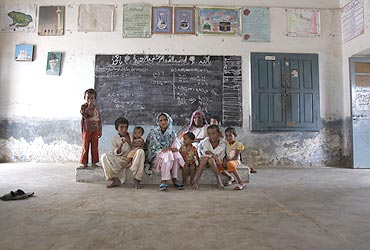 Image: A family living near the Sindh river took shelter in a class room in Sukkur, in Pakistan's Sindh province, on August 3
Photographs: Akhtar Soomro/Reuters

Giving an update on the US assistance to Pakistan for flood relief work, State Department spokesman P J Crowley, said in the last 24 hours the US has sent 13 separate supply flight delivering more than 316,000 halal meals to Pakistan with another 110,000 expected to be delivered overnight.

US Defence Secretary Robert Gates has authorised the deployment of four Chinook and two Blackhawk helicopters from 101st Airborne in Afghanistan over to Pakistan to assist.

"Unfortunately, due to the weather conditions, they have not yet been able to arrive in Pakistan, but will be trying again overnight," he said.

US aid workers deployed to Pak 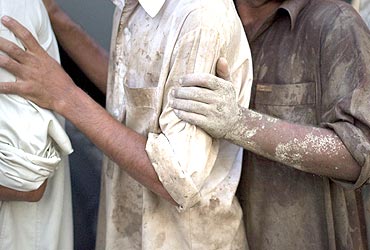 The State Department has reactivated its texting programme, anyone can text Swat to 50555 and make a $10 contribution to the victims of the flooding in Pakistan.

Every text results in a donation of $10 to the UNHCR Pakistan Flood Relief Effort, which is providing tents and emergency aid to displaced families.

USAID has deployed humanitarian relief experts to Pakistan to work in support of the government of Pakistan and manage the overall US response effort.

The government of Pakistan has issued a detailed request for assistance which US and international officials are working to support, said a fact sheet issued by the state department.

US comes to Pakistan's rescue 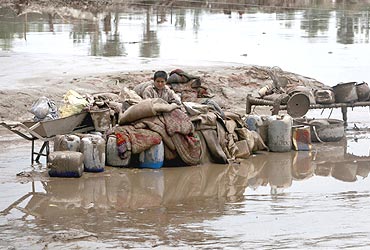 Image: A boy sits next to his belongings while waiting to be evacuated from floods in Nowshera, located in Pakistan's northwest Khyber-Pakhtunkhwa Province, on August 2
Photographs: Faisal Mahmood/Reuters

The US made an initial pledge of $10 million for humanitarian assistance under the supervision of Pakistans National Disaster Relief Authority.

US helicopters have airlifted 733 people to safety and transported 11,873 pounds of provisions to flood victims since July 30.

Four Zodiac inflatable rescue boats with power motors and two water filtration units - which provide pumping, purification, and distribution of potable water for up to 10,000 persons daily -- are being provided for use in the affected area, the State Department said.

Further, 12 pre-fabricated steel bridges have been made available as temporary replacements for highway bridges damaged by flooding in Peshawar and Kurram Agency.
More
© Copyright 2022 PTI. All rights reserved. Republication or redistribution of PTI content, including by framing or similar means, is expressly prohibited without the prior written consent.
Print this
article
ALSO
READ
MOST
RECENT