How hunger and floods killed him in Pakistan 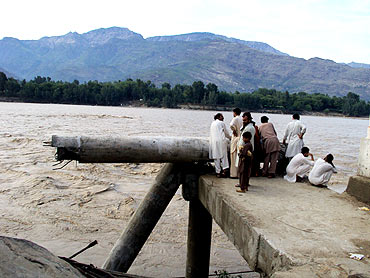 In flood-ravaged Pakistan, the government's relief operations are largely ineffective and the victims' plight is heart-rending, reports Tahir Ali

My Iftikhar will come back..he is outside for some work.. Don't enter his room, as he minds if someone disturbs his privacy," says Haleema, mother of Iftikhar who drowned last week in flooded Swat river in Pakistan.

Iftikhar Ahmed, 18, son of a poor blacksmith, Iqbal Khan, lived in a small village in Lower Dir district in Khyber Pakhtoonkhwa province, which remains severed from the rest of Pakistan due to the Swat's severe floods.

Eldest of five siblings, Iftikhar, after passing matriculation exam, took to his father's occupation and was earning enough for his family to lead a normal life.

In early August, Pakistan was hit by the worst flood in living memory, which has so far killed around 1,600 people. The massive downpours first battered KPK and then the floodwaters swept downriver through the south, affecting some estimated 20 million people.

Swat valley was first to be affected by the flooding, after it washed away all the bridges over the Chitral river, which severed Lower Dir and nearly half the district's area from the rest of the country, disrupting all life in the area.

As a result, the prices of essential commodities skyrocketed; even a kilogramme of tomatoes was being sold at PRs 140.

It was because of such high prices that Iftikhar decided to cross the flooding river along two of his few friends to Malakand agency, where the food prices were still normal.

Iftikhar's story is not unique 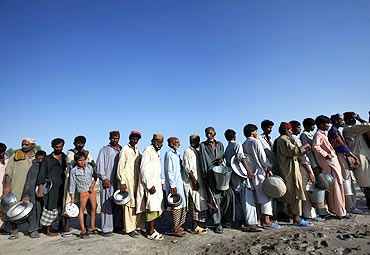 They decided to cross the river and bring back vegetables in their homemade rafts, made of a piece of wood and tyre tubes. They did not realise that the Swat was in a killing mood -- the water was five times more than normal.

It was the same river that a day earlier had killed Lashadar Khan, also from Iftikhar's village.

Iftikhar and his friends Abdul Aziz and Maaz Khan started their voyage in their rafts. In the middle of the river Iftikhar slipped into the water and was seen trying to swim.

His two friends succeeded in crossing the river into Malakand agency, but Iftikhar did not reach the river bank. Some villagers saw him struggling, but no one dared to plunge into the water and save his life, so strong was the current.

Iftikhar's dead body has been not recovered yet. The news of the young blacksmith's death sent shockwaves all around the area. His mother went crazy on hearing the news of his drowning.

"Who says my son has drowned? He is outside working at his workshop and will come back in the evening," she still repeats the same story while she does not allow anyone to enter her son's room.

Her husband, Iqbal Khan, is still optimistic about his son's return. He says, "My son will return; actually he must have crossed over to Malakand agency and will come home, as the government will erect a bridge over the river."

This is by no means a solitary story, one can find many such gloomy families all over -- some have lost their family members, others are rendered homeless.

Government ineffective in tackling the catastrophe 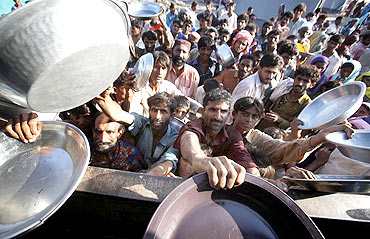 The outbreaks of life-threatening diseases is visible all around the affected areas. Workers from the international NGO, Doctors Without Borders, have so far treated some 10,000 people, out of whom 10 percent were treated for acute diarrhoea and cholera.

The floods have affected people from all walks of life; the gushing water has destroyed billion dollars worth of infrastructure and crops, greatly damaging the agricultural sector.

In the North West Frontier Province a large number of vegetables and fruit farms have been destroyed, in particular the sugarcane crop has been laid waste.

In Punjab and Sindh provinces, cotton and rice crops have been badly damaged. An estimated 80 per cent of the flood victims depend on agriculture and, according to the UN, some 3.2 million hectares of standing crops have been damaged or lost.

The Pakistan government says the relief operation is hindered by the logistical problems, as it does not have enough resources to reach all victims -- thus totally relying on foreign aid.

Last week the UN appealed for $ 460 million for humanitarian operations for the next three months in Pakistan; and has so far received more than half the amount. According to the UN humanitarian spokesman Maurizio Giuliano, '54 percent of the target has been reached.' 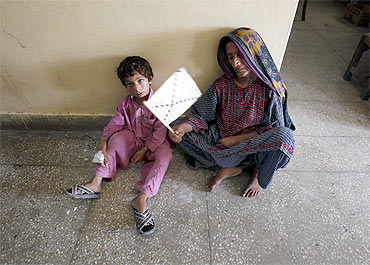 Image: The scene at a government hospital in Sukkur, Pakistan
Photographs: Akhtar Soomro/Reuters

The situation in the flood-hit parts of Pakistan would turn further chaotic when the floodwaters recede and people return to their homes.

Pakistan needs major assistance from the international community for reconstruction and rehabilitatio, but donors are reluctant to help as they fear the 'corrupt' government.

However, a government statement stated that "all the aid from the international community will be used for the victims and it will never go into the wrong hands."

It is due to the government's corrupt image and poor performance that the Taliban and other militant organisations are taking advantage of the situation by helping the victims and garnering popular support.

Tehrike Taliban Pakistan is very active in helping the victims in the southern parts of KPK while the Jamaat-ud-Daawa has already taken credit while for the victims in Nowshehra and Charsadda district in upper KPK.

The JuD workers reached the affected areas well before the government and was appreciated by everyone. The TTP has offered the Pakistani government an aid of $ 20 million, but with a condition that the governemnt will have to reject any sort of flood assistance from the United States.