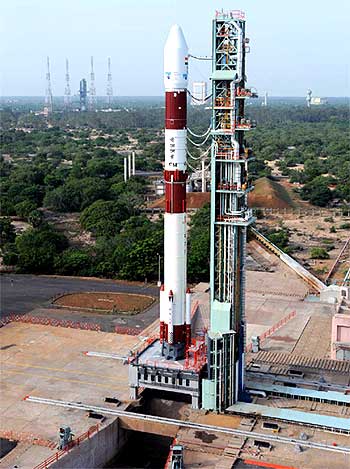 Image: The launch of PSLV-C14 at Shriharokota on Wednesday
Photographs: ISRO

The Indian Space Research Organisation on Wednesday placed in orbit seven satellites including Oceansat-2 within a span of 20 minutes, its first successful mission after the abrupt end of the ambitious Chandrayaan-I project.

At the end of the 51-hour countdown, the 44.4 meter tall four-stage Polar Satellite Launch Vehicle-C14 blasted off from the first launch pad at the Satish Dhawan Space Centre with ignition of the core first stage and put the satellites in orbit one after another.

A set of six nano satellites rode piggyback accompanying Oceansat-2 on its trip to orbit.

Ansari and senior scientist M G K Menon, who were present in the mission centre, congratulated ISRO scientists soon after the successful launch. 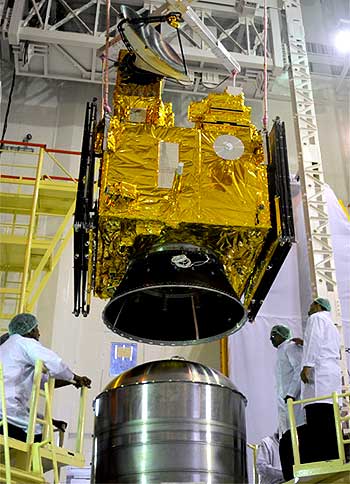 According to ISRO, the reliability of PSLV, their premier launch vehicle, has been excellent. ISRO has done 16 flights with the PSLV, of which 15 have been successful.

The PSLV D1 was used to launch the IRS-1E on September 20, 1993. The launch vehicle, which was carrying the IRS-1E satellite meant for operational remote sensing, did not turn into reality. ISRO had stated that the mission could not be completed as there were problems with the launch vehicle.

The second outing with PSLV-D2 on October 15, 1994, was a success. The PSLV launched IRS-P2, weighing 804 kg, which was sent on the same mission as IRS-1E. It was launched into space to conduct operational remote sensing. ISRO termed this mission a complete success, as apart from the successful launch, the IRS-P2 managed to stay in orbit for the stipulated one year.

The PSLV-D3 launched on March 21, 1996, launched the 920-kg IRS-P3 that undertook remote sensing of the earth's natural resources. It also studied the X-ray astronomy and undertook periodic calibration of PSLV tracking radar located at tracking stations. 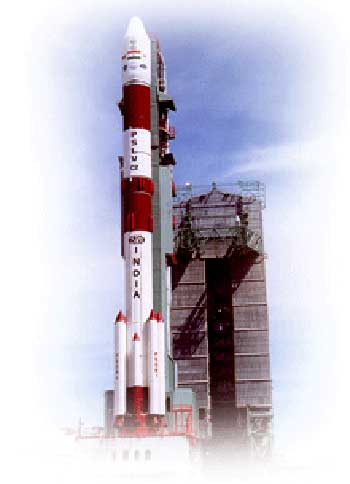 The PSLV-C1 launched the 1,250-kg IRS-1D satellite on September 29, 1997. This was the second generation of IRS series of satellites which had three payloads -- PAN, LISS 3 and WiFS. The IRS-1D was an improvised version of the IRS-1C that gave better better quality images.

The PSLV-C2, launched on May 26, 1999, placed three satellites -- Indian Remote Sensing Satellite (IRS-P4) as the main payload, the Korean KITSAT-3 and German DLR-TUBSAT as auxiliary payloads -- into a 727 km polar sunsynchronous orbit.

This launch was considered to be a milestone for ISRO as it had launched three satellites in a single vehicle for the first time.

The PSLV-C3 launched three satellites again on October 22, 2001. The three satellites were the Technology Experiment Satelliteof India weighing 1,108 kg, Project for On Board Autonomy of Belgium weighing 94 kg, and the Bispectral and Infrared Remote Detection of Germany weighing 92 kg. The overall length of PSLV-C3 was 44.4 m and the lift-off weight was 294 tonnes.

The PSLV C4 launched the 1,060-kg METSAT on September 12, 2002. The seventh PSLV flight of ISRO was initially designed to launch a 900-kg IRS satellite into a 900 km polar sun synchronous orbit. When compared to the earlier launches, the flight path of the PSLV-C4 was modified to inject the METSAT into a Geosynchronous Transfer Orbit of 250 km perigee (nearest point to earth) and 36,000 km apogee (farthest point to earth). 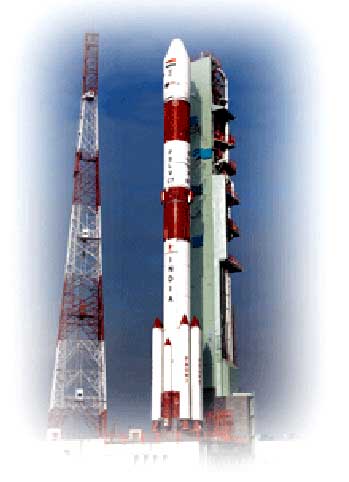 The PSLV-C5, which launched India's remote sensing satellite IRS-P6 on October 17, 2003, was the eighth flight of ISRO's PSLV. The IRS-P6 weighed 1,360 kg into an 817 km high polar sun synchronous orbit. With each launch, ISRO had improved the PSLV and hence the PSLV was offered to launch satellites of other space agencies and countries through Antrix Corporation Limited, ISRO comercial arm.

The ninth flight of the PSLV launched the CARTOSAT-1 and HAMSAT on May 5, 2005.

CARTOSAT-1 is the first IRS satellite capable of providing in-orbit stereo images. The images are used for cartographic applications meeting the global requirements.

The HAMSAT micro satellite is India's contribution to the international community of amateur radio operators.

ISRO launched PSLV-C7 on January 10, 2007, with modifications to the stage control electronics and by incorporating a video imaging system to capture payload and DLA separation events. The PSLV-C7 launched the CARTSAT-2 and the Space Capsule Recovery Experiment (SRE-1) was a 550-kg capsule intended to demonstrate the technology of an orbiting platform for performing experiments in micro gravity conditions. 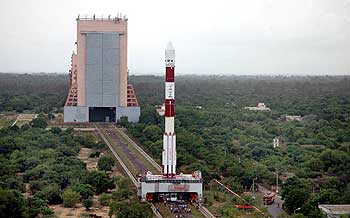 Image: PSLV-C11 on its way to the launchpad
Photographs: ISRO

The 11th flight of ISRO's PSLV was the first commercial launch. PSLV C8 launched the 352-kg Italian astronomical satellite, AGILE, into a 550-km circular orbit. This launch was conducted on April 23, 2007.

The PSLV-C9 launched on April 28, 2008, with CARTOSAT-2A, IMS-1 and 8 nano satellites. The CARTOSAT-2A is the 13th IRS satellite that can provide scene specific spot imagery. This satellite carried a panchromatic camera and the spatial resolution of this camera is better than 1m and swath of 9.6 km. Imageries from this satellite were used for cartographic applications like mapping, urban and rural infrastructure development and management, as well as application in land information and geographical information system. The IMS-1 was a low-cost microsatellite imaging mission of ISRO.

The PSLV-C11 will go down in history since this launch vehicle was used to launch India's first moon mission, Chandrayaan-I. The PSLV-C11, which launched the Chandrayaan-1 on October 22, 2008, was an upgraded version of ISRO's PSLV standard configuration. Weighing 320 tonnes at lift-off, the vehicle used larger strap-on motors (PSOM-XL) to achieve higher payload capability. 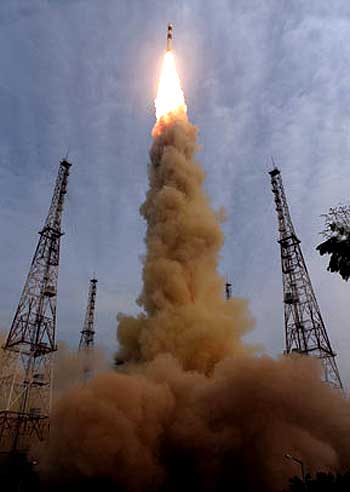 The PSLV-C12 launched RISAT-2 and ANUSAT (Anna University Satellite) on April 20, 2009. RISAT-2 is a Radar Imaging Satellite with all weather capability to take images of earth. This satellite was used to enhance ISRO's capability for disaster management applications. ANUSAT was the first satellite built by an Indian University under the over all guidance of ISRO and was used to demonstrate the technologies related to message store and forward operations. 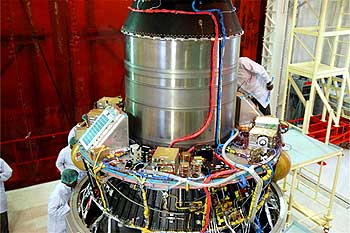 The latest venture by ISRO on September 23, 2009, was successful. The PSLV-C14 launched into space the Oceansat-2 and six other nano satellites.