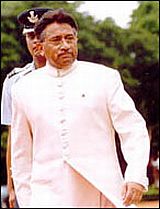 Former Pakistan President Pervez Musharraf has said that military aid provided by the United States to Pakistan for the war against terror during his tenure had been used to strengthen defences against India, the first such admission by any top Pakistani leader.

Musharraf admitted that he had violated rules governing the use of the military aid, and justified his actions by saying he had "acted in the best interest of Pakistan."

In an interview with a news channel, he said he "did not care" whether the US would be angered by his disclosure.

The former military ruler, who resigned as president in August last year to avoid impeachment, said he was not ready to compromise on Pakistan's interests.

India and several influential lawmakers in the US have been saying that Pakistan had used funds given to it by the US to take on militants to strengthen its defences against India.

However, Pakistan had been denying the charges. Musharraf said that if he had not supported the US in the war against terror after the 9/11 attacks, American forces could have entered Pakistan to capture its nuclear assets.

He said it was also possible that the US and India could have jointly attacked the country.

Musharraf said Pakistan's nuclear programme was so advanced during his tenure that scientists had not only begun enriching uranium but had also developed plutonium-based weapons.

Asked about scientist A Q Khan's claim that he had been forced to make a confession about running a nuclear proliferation network, Musharraf said Khan "had done a lot but he was lying that he was forced to apologise before the nation."

Source: PTI© Copyright 2022 PTI. All rights reserved. Republication or redistribution of PTI content, including by framing or similar means, is expressly prohibited without the prior written consent.
Related News: Pervez Musharraf, Pakistan, US, India, Khan
Print this article