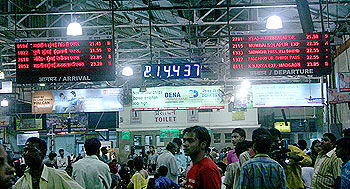 A year after November 26, 2008, as the clock struck 9.44 pm again, rediff.com correspondent Prasanna D Zore and photographer Sanjay Sawant spend some time at Chhatrapati Shivaji Terminus to find that nothing much has changed as far as securing the station is concerned.

At about 9.44 pm on November 26 last year began the worst nightmare for the citizens of Mumbai. They witnessed scenes so horrific and blood curdling they would remain a part of every Mumbaikar's worst memories.

Two -- of the 10 terrorists who came all the way from Pakistan -- terrorists, Mohammad Amir Ajmal Kasab and Abu Ismail laid siege to Chhatrapati Shivaji Terminus in Mumbai snuffing out 56 innocent lives in cold blood. There were officers and constables of the Railway Protection Force present at the station then. Some faced the terrorists valiantly; some just scooted away from the scene. 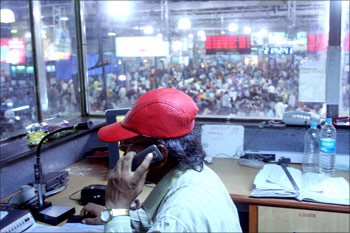 One such brave soul that night was railway announcer Vishnu Dattaram Zende whose fervent appeals to the commuters present at the station that night perhaps saved scores of lives falling prey to the gunmen's bullets.

Zende, however, had left by 6 pm on November 26. Instead Anand Meshram had donned the announcer's role in his trademark red cap doing what all announcers dutifully follow. Downstairs hundreds and thousands of passengers waited to board their outstation trains. 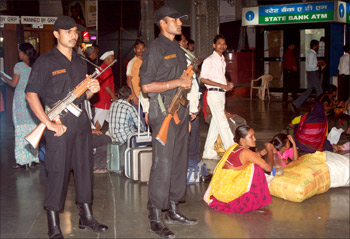 With security beefed up on the occasion they looked quite at ease.

One could see commandos stationed at various strategic locations all around CST their assault rifles slung across their shoulders in anticipation.

But this is another night, another year. 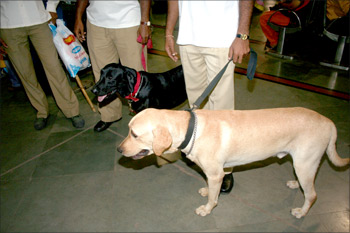 Sniffer dogs too were pressed into service. Rudra (blond) and Naughty (black) made their presence felt as they sniffed at every suspicious luggage including this correspondent's. 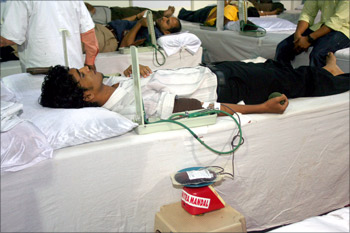 The feeling of solidarity that the city denizens exhibited on the first anniversary of the worst terror attacks on the city of Mumbai marked the somber occasion. A blood donation camp organised by the Central Railway elicited huge response.

More than 1,200 people donated blood to express their solidarity to those who died at the station last year. 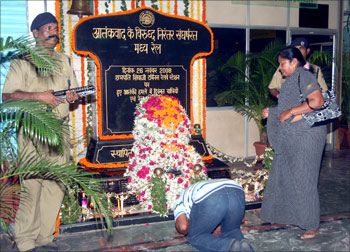 Image: People paying their respect at a memorial inside CST

People paid their obeisance at the memorial erected at the CST station for those who were felled by Kasab and Abu Ismail.

Through the day, people offered flowers to pay their respects to those who were murdered in cold blood for no fault of theirs. 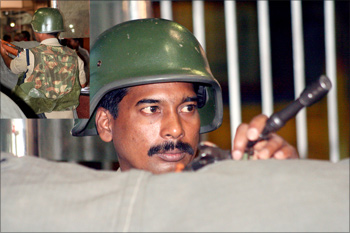 Talking about security this was the only guard stationed at a post -- from where outstation trains depart for their journey to the nook and corner of the wonder that is India -- wearing a bullet proof jacket giving him an advantage over his other colleagues who maintained vigil at the station last night.

We wonder if he or his superiors checked the efficacy of the contraption before the brave policeman donned it. The doubts raised by slain Anti-Terrorist Squad chief Hemant Karkare's wife Kavita Karkare are still fresh in our memory. Agreed public memory is short but not so short as to forget what happened just a couple of days ago. 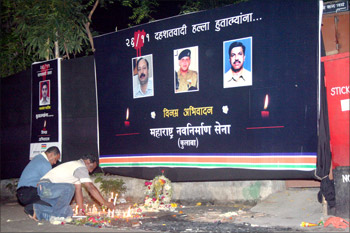 Image: A tribute to the brave policemen

Late that night on November 26 last year the bullets fired from Ajmal and Ismail's AK-47s consumed three of the finest officers of the Mumbai police.

A photograph of ATS chief Hemant Karkare, additional commissioner of police Ashok Kamte and ace Inspector Vijay Salaskar look askance at the people offering their shraddhanjali at the place where they lay injured for more than 40 minutes to die perhaps a painful death. As if the three officers are asking people to raise their voice and fight to find what exactly happened that night.

The administrative office of the CID is just 50-odd metres from the place where the three officers were assassinated.