Though his brother Chand, who also worked at the Leopold Cafe, survived the shooting, the incident left him mentally unstable. Chand Pasha is now being treated in a hospital in his native town.

Pir's wife blames the media for her brother-in-law's hospitalisation. "It's the media that has driven him crazy. He was working even after the tragedy. He was looking after us too. His own family is in our village. They pestered him in the cafe and hounded my children here. They kept asking him the same question: 'How does it feel to work in a hotel where your brother was killed?' Then they would ask my children: 'Do you miss your father?'" says Pir Pasha's wife Husain bi in between tears.

Pir left behind five school-going children. Munira, the eldest, is in Class 10 and plans to become a fashion designer, a dream her mother is unwilling to help her with. A girl's place is in the home, says Husain bi.

Pir Pasha was paid Rs 3,800 at the Leopold Cafe. The owners continue to pay that amount to his wife and have promised to pay them till her elder son, Abdul Kareem, gets a job. Kareem is now in Class 8.

"Daddy used to get tips too, and that helped," says Munira. Since Pir Pasha's death, the family has found it difficult to get by on Rs 3,800 -- the rent costs Rs 1,000, the last power bill was Rs 1,000 and the cooking gas cylinder costs Rs 320. After all these expenses, the family is left with Rs 50 to subsist on every day.

The state government gave them a compensation of Rs 500,000. The amount was put into fixed deposits in the name of the five children, each receiving Rs 100,000 each. The family also received Rs 200,000 from the prime minister's relief fund which was deposited in a savings account. "We withdraw money from there when we need it," says Munira.

The money has since halved. Husian bi shudders to think of the day when that money will run out. They will have to then touch the children's deposits just to survive.

Her school-going children are too small to support her and have a long way to go.

"When I went from Class 8 to 9, I had to fight to continue going to school. Then when I passed from Class 9 to 10, I had to face the wrath of my uncles. I am sure I will be able to go up to Class 12, but they will never allow me to do fashion designing," says Munira.

"We do not allow our women to go to work. That is our culture," insists Husain bi. Perhaps things may have been different if a bullet had not found its mark on a poor waiter, working hard to bring up five children. 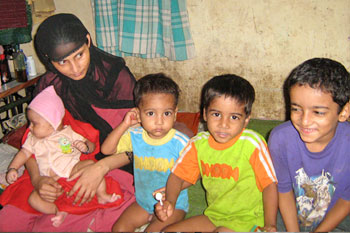 Image: Moumina Khatoon and her four children. Her husband Umar was a taxi driver who died on 26/11.
Photographs: A Ganesh Nadar
Moumina Khatoon sits on the bed near her four-month-old boy, her eyes look tired.

"The child has a cold, he can hardly breathe. I was up all night as he was crying," she says.

Moumina's husband Mohammad Umar, 35, drove the taxi in which the terrorists had placed a bomb. The taxi exploded at Vile Parle, northwestern Mumbai, on the night of November 26, 2008.

Moumina is from Dafarpura village in Siddharth Nagar district, Uttar Pradesh. She was pregnant when her husband passed away. Now a widow with four children, she is illiterate, but determined.

"My husband brought us to Mumbai so that the children could get a good education which both of us did not have. I will make sure I do that whatever happens."

She looks at her three boys till her gaze rests on two-year-old Afzal. The most mischievous of the four. "Shaitan hai (he's a devil), takes after my father-in-law," she says in a moment of humour that brings a fleeting smile to her tired eyes.

"The landlord will keep increasing the rent, where will I go? The children keep falling sick. Where do I have the money? My in-laws are not helping. I have a share in the family coal shop, but haven't got a penny. My father-in-law keeps harping on the Rs 500,000 the government gave us," she says, almost talking to herself.

The one room tenement she lives in the slums of Govandi, north-east Mumbai, is scrupulously clean. Her younger sister came to live with her after the tragedy, but Moumina knows she can't stay indefinitely.

Moumina is small and frail, but her spirit flashes when she talks about the government. "They gave me Rs 500,000 and promised me another Rs 200,000 from Delhi. I was told to open an account with a nationalised bank. I ran from pillar to post, even in my grief I did the needful and got that account. Now after a year I haven't got the Rs 200,000."

She later realised she had given the wrong bank details to the Mumbai collectorate, hence the money had not been credited. Last week, Moumina provided the correct details and has been assured that the money will be deposited soon.

The Rs 500,000 that the state government gave her as compensation has been deposited in a cooperative bank which gives a higher interest rate than a nationalised bank. She receives Rs 4,500 as interest every month, out of which Rs 1,700 is paid as rent, and for electricity and water. It is the frequent sicknesses of the children and herself that eats into her interest.

Since 26/11, Moumina has not been to her village. "I cannot travel alone, I don't know the way. I may go this year, but that is not important." It is evident that what matters more to her is the education of her children.

"Let my son grow up, I will make my father-in-law give my son his rightful share," she says with a rare glint in her eyes.

Moumina is frail, but her mental strength is commendable even as she struggles alone with four little children.