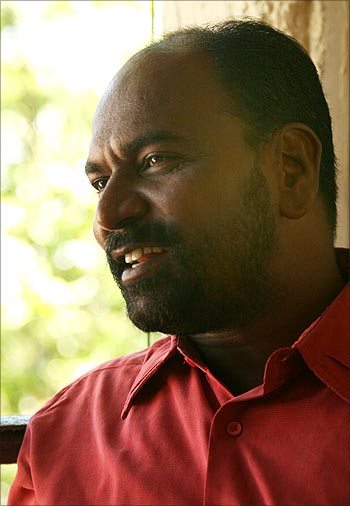 On November 26, 2008, Ashwini Jadhav was one of the millions who were glued to their television sets. Only, she had more at stake. Earlier in the night, her husband Arun Jadhav, a constable in the Mumbai police's crime branch, had called her as he was leaving from work.

He told her that something pressing had come up and that he would be late. Ashwini had heard this many times before. Jadhav was a field man in the crime branch and his work took him to all kinds of places at all kinds of times.

But as she began the wait for her husband, she switched on the television. She immediately knew that this time, the wait was going to be like no other.

"When the television channels started showing the terror attack, I immediately knew that's where he had gone," Ashwini says, a year after.

As the night grew older, the lights started going out one by one in the police lines where the Jadhavs live. "After a while, as the policemen from other stations started coming home, the wait was over for the other wives who were also equally anxious."

Soon, barring Ashwini's home, all the other husbands had returned home. "The lady living in the opposite room is from the same town as me. They were sitting with us all night."

Then, the television channels started flashing the news that Vijay Salaskar, one of the most feared encounter police officers in Mumbai, was dead. Salaskar was Jadhav's boss.

"When I saw that Salaskarsaab was dead, I lost all hope," she says.

"My husband and he were like brothers. During operations they were always together. So when news came in that Salaskarsaab himself was dead, I was very sure my husband was also dead."

Now, the wait was for confirmation of Jadhav's death.

Death would visit him thrice that night 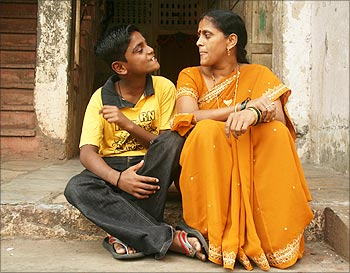 Image: Ashwini Jadhav and her son Parashuram.
Photographs: Priyanka Sharma
Just before he was leaving for home, Jadhav got a call from Salaskar.

Salaskar asked him to come to the Colaba police station for an important operation.

As he got to the Toyota Qualis, along with Salaskar was Additional Commissioner of Police Ashok Kamte and Anti-Terrorism Squad chief Hemant Karkare.

As the police officers and constables started driving slowly towards the front gate of the Cama Hospital Jadhav did not know that death would visit him not once, but thrice.

First, the terrorists saw the approaching Qualis and fired at it, killing Karkare, Kamte and Salaskar.

Jadhav was hit five times. Three bullets in his left shoulder and two in his right elbow, which was almost severed. He played dead and maneuvered himself under the bodies of three other constables who had died.

The second time death lurched at him was when Kasab fired at the constables on the back seat when one of their phones went off. This time, the bodies on top of him shielded him.

"The 20 minutes that they drove around was the worst in my life. I spent each of those minutes thinking that I could be killed any moment," he recalls.

After driving for 20 minutes, a flat tyre forced the terrorists to dump the police van and hijack a Skoda car.

The third incident that got Jadhav almost killed was ironic.

"When the police arrived, nobody knew me. I was in my civilian clothes. I was yelling my name out, saying I am a constable. As they cautiously approached the car, I seriously thought my time was near. Then a constable on that team recognised and identified me," Jadhav says.

Only at 3:30 am did Jadhav switch on his phone. "I had forgotten that I hadn't called my family. Then it struck me that once they saw the news of Salaskarsaab's death, they would think I was dead too. That's when I called them and assured them I was alive."

All he does is talk about his boss Salaskar 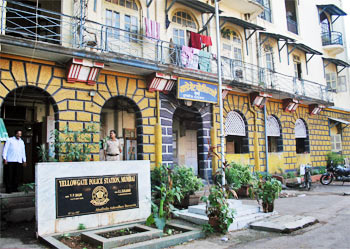 To break the ice, we speak about the building. Why don't they restore it? I ask. It is a heritage building, he says. "There used to be families living here. Then something happened -- I think a suicide -- and it was turned into a police station. The crime branch works out of here now. Salaskarsaab used to sit exactly where you are sitting now."

"We worked together for four months from this place," he tells me.

Like this, each time I ask him about something, Jadhav's mind keeps coming back to Salaskar.

He even has Salaskar's photo as his mobile wallpaper and has the martyred cop's phone numbers. It is as though he is waiting for his bhau (brother) to call him again.

"He was like an elder brother to me. I worked with him for 14 years. Wherever he got transferred to, he took me along," Jadhav says.

Jadhav was Salaskar's eyes and ears. "When we went on an operation, I would go in first and relay the information to him. He would map out the course of action from my inputs," says Jadhav who participated in over 50 encounters with Salaskar.

It has been a few months since Jadhav rejoined duty; he is still recovering from the bullet injuries.

"There is still one bullet in my right elbow. I am slowly recovering," he says.

Once he rejoined duty, life was blank for Jadhav. There was no Salaskar to give orders. He was clueless in a job he has been doing for 20 years. "I just couldn't imagine how to do any work without Salaskarsaab around."

"Unke tajurba ke bina, main toh kuch nahin kar paoonga. (I cannot do anything without his experience). I had major doubts about my utility to any other officer. I didn't know how I would fit into the team of another officer. Slowly, both me and my new saab have overcome the initial hurdles. I am slowly getting back to the field work." 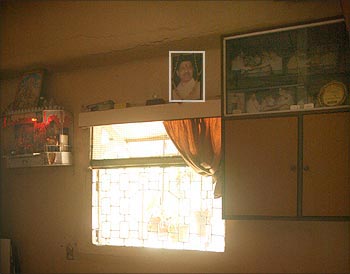 Image: A photograph of Salaskar occupies prime place in Jadhav's home.
Photographs: Priyanka Sharma
Jadhav says he had no major intention of changing anything. "I didn't want to quit the job. I didn't want to change anything. If at all something changed, it was the strengthening of my resolve. I want to work on the same job and do better," he says.

If at all something has changed, it is the fact that he has started turning to God more. "Earlier too I believed in God. But I was never a man who said his daily prayers. Nowadays I say a prayer everytime I leave home. Because I have realised that if a person like me still comes back home every night, then it is because of God."

Though Jadhav maintains not much has changed since 26/11, a chat with his wife and family says a different story.

"Even this morning I told him to leave this job," says Ashwini.

And then clarifies 'leave the job' here means 'leave the field job with the crime branch'.

"You think I have the guts to tell him to leave the police? No. I -- and his parents -- have been telling him for the past year to take up a normal police job in a station. But he won't listen," she says.

Jadhav's family has good reasons to fear for him. He has been seriously injured in the line of duty thrice in the past decade. "The first two instances were not half as bad as 26/11. But 26/11 shook us up as a family," Ashwini says.

In her opinion, it has shaken up Jadhav too. She says the repercussions are there for the family to see every day.

"He sometimes screams in his sleep, 'Maro usko! Pakdo usko! (Kill him! Catch him!)' I have to wake him up and bring him back to his senses," she says.

"Then there are nights when he sits out in the corridor outside their room, and doesn't sleep all night. No amount of persuasion from the wife or children can make him come back into the house," she says

And he is turning ill-tempered. "Earlier too, he used to get irritated. But these days he gets irritated far too easily and more often also. These days, I have become more accommodating," says Ashwini. "Since I understand what he has gone through, I don't tell him anything."

'When Kasab saw me, he was ready to confess' 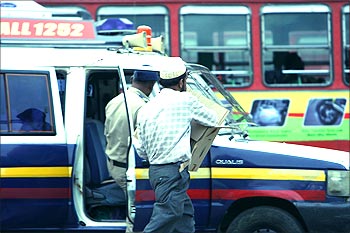 Image: A police Qualis outside the Taj during the attacks.
Photographs: Sanjay Sawant
Despite all that he had gone through, Jadhav's life would be linked to 26/11 forever. There is nothing he can do about it.

He was the only policeman to survive the killings that shocked the Mumbai police.

He was the person who alerted the police that the terrorists had changed to a Skoda.

His call ensured that Ajmal Kasab was captured.

In court it was when Kasab saw Jadhav that he decided it was pointless to continue denying charges anymore.

"When he saw me and understood that not all those people in the jeep were killed he said he wanted to confess," says Jadhav.

That day Jadhav broke down when he narrated to the court how the terrorists had dragged the bodies of his senior officers out of the Qualis.

Then when the defence lawyer asked him why he hadn't fired, Jadhav had the now well-known outburst.

"I had three bullets in my left hand and two in my right. I couldn't even move my hands, let alone handle my carbine," he says about his outburst in court.

"The best operations were the ones that happened outside Mumbai when I was in Salaskar saab's team. The most memorable one was when we had to go to Bangalore and confront three dangerous gangsters at the airport. But this (26/11) is the best case in my life. Despite all the loss, I feel that I got a chance to serve not only the people, but in a very small way, serve my nation too."