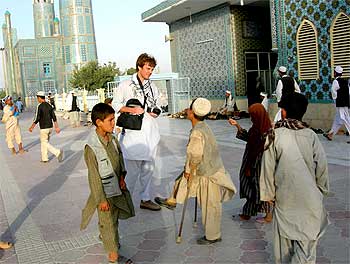 His book To Live Or To Perish Forever is a fascinating account of his stay between 2006 and 2008, one of Pakistan's most turbulent years.

In a telephone interview from his home in Washington DC, Schmidle, who speaks Urdu and Persian, spoke to rediff.com's Archana Masih about the future of the Taliban after Tehrik-i-Taliban Pakistan chief Baitullah Mehsud's reported death and the road ahead for Pakistan.

How is Baitullah Mehsud's death going to impact the anti-Taliban operation?

It is a very symbolic victory for both the US and Pakistanis and symbolic defeat for the Taliban. Hakimullah Mehsud (who claimed to have succeeded Baitullah Mehsud as head of the Pakistani Taliban) is thought to be equally ruthless in the tribe, but he doesn't have the aura, public stature and relationship with Al Qaeda that Baitullah does.

If Baitullah is truly dead, it is a major blow and shock to the Taliban. How it affects reality on the ground, I truly don't know -- Baitullah was certainly contributing a number of fighters and suicide bombers to the Taliban in Afghanistan.

It represents a pretty major achievement between the US and Pakistan in terms of sharing intelligence.

You have met the Mehsud tribesmen, how do you think followers react to the deaths of jihadi leaders?

I can only guess from the reactions of past leaders, after the death of Abdul Rashid Ghazi, the cleric of the Red Mosque -- he became larger in death than he was in life. While walking in Pakistan, you saw people of all ages wearing the maroon knitted caps that Ghazi used to wear and they were referred to as 'Ghazi caps.'

There were a lot of conflicting reports about Baitullah Mehsud's successor, with reports of a bloodied succession battle which was refuted by the Pakistani Taliban. Then there were two, three names that were claimed as Baitullah's successors?

Someone like Hakimullah or Wali-ur-Rehman were the strong contenders. It looks more like that the Pakistani Taliban are a Mehsud tribal insurgency and not a broad based insurgency representing all sorts of groups.

Where do you think the battle with the Taliban has reached as far as containing them is concerned? Are they on the backfoot after Baitullah's death?

I think the Pakistani Taliban are certainly rattled by Baitullah's death and the increasing persistence of the drone strikes.

The increasing precision shows that the intelligence leading to the drone strikes is getting considerably better. That there are more people willing to share information about Baitullah and his lieutenants's locations.

It suggests that people are more dissatisfied with what the Taliban are bringing to South Waziristan. I think the Pakistani Taliban are their own worst enemy. They are a public relations disaster for themselves.

The average Pakistani has increasingly come to realise that the Pakistani Taliban are not all that they said they were. They are more than a couple of guys that want to impose sharia, they in fact want to overhaul society.

The average Pakistani love for the idea of the Taliban has given away to their understanding of what the Taliban could actually bring and they don't want that.

'Naive to think there is no ISI involvement' 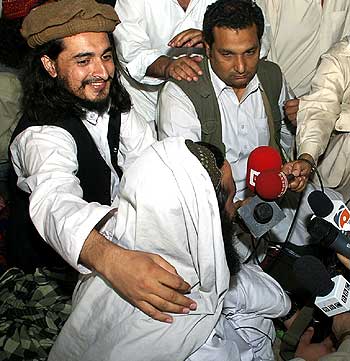 Image: Pakistan Taliban chief Hakimullah Mehsud with his arm around Baitullah Mehsud
Photographs: Reuters
How committed do you think Pakistan is in its fight against the Taliban?

How deep is the ISI's involvement with the Taliban?

It depends, with some Taliban there is no involvement. We would be naive to think that there is no ISI involvement in supporting other Taliban groups.

In the two years you spent in Pakistan, the people you met, the places you went to -- the Red mosque, Waziristan -- you were going into the unknown, you even went to the madarssa where Daniel Pearl was said to have spent time -- how scared were you about your safety, about being mislead each time?

I spent time on the outskirts of South Waziristan, it's virtually impossible to go inside South Waziristan. At that time it did not seem dangerous or risky at all. Now I am not sure if I'd go to some of the places I went two years ago. I don't know if given the opportunity I would go there again tomorrow.

There is something to be said about good contacts and good journalists who are familiar with the area in which you are going and provide introductions. They can act as a second pair of eyes, so with their assistance I was never overtly concerned about where I was going.

You met local journalists in the North West Frontier Province and elsewhere who wrote without bylines for fear of being targeted. Can you describe how these people worked, their fears etc?

The longer that I was there, the more risk they took in meeting me and having to go back to their local population. That is a major factor that often gets missed, that we as Western journalists can go into Swat for three days and I can leave.

The fact is the individual who made all the arrangements and facilitated it, lives in Swat. So people took great risks to help me understand and help me get the story out.

In the earlier part of the book, the first trip I took outside North Waziristan, at that time there were journalists going in and out of North and South Waziristan, it is impossible to do so now. The situation has constantly gone downhill.

If someone called me asked if he should go to Swat I would say no, but a year ago it seemed as a perfectly legitimate thing. 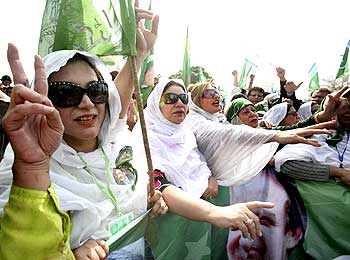 Image: Pakistan Muslim League supporters celebrate Iftikhar Chaudhry's reinstatement as chief justice.
Photographs: Mian Khursheed/Reuters
In your meetings with madarssa teachers, students, jihadis -- what is the sense you got about their views on India and Kashmir? Of those you met on the ground, did Kashmir come up in your discussions with them?

There is this perception that Kashmir has been wronged from the Pakistani perspective, that India unjustly took over Kashmir and that's a larger perception. That is not something that is believed in the madarssas or by the jihadis, it is something believed across society.

I mention this in the book too, the very education process, people from a very young age are educated to believe that India represents an existential threat to Pakistan. That is not something confined to the far extreme right or to the madarssas or jihadis.

In your interaction did it appear that they have been more preoccupied with Afghanistan and Pakistan than with Kashmir?

From 2006 to 2007, early 2008 I found that there was a certain shift that had taken place. Those people who thought that Pakistan's problems were coming from outside and those who though it was being destabilised from outside increasingly believed that that destablising force was coming from the western border like Afghanistan than from the eastern border, India. That was a psychological shift that took place.

That's not to say people still didn't think that the Indians were not destablising Baluchistan. That's something I found very remarkable even when I was meeting military officials outside of South Waziristan.

After spending two years reporting and living there, do you think democracy can take root at all in Pakistan?

Yes, democracy is a belief among Pakistani people and on the ground among people it has certainly taken root and is strong.

It's the institutions that are supporting democracy that are unfortunately very weak though as a result of four military interventions and the fact that an elected government has not been allowed to perform its full term.

But as the movement to restore the chief justice shows, the general street level desire for democracy is very strong.

Both your father and brother serve in the United States Marines. Your father is, in fact, a general. What was their reaction to your meetings with these jihadis, the ones they were fighting on the battle front?

We are interested in similar things, in what is happening in other parts of the world. We come at the issues with very different tools. They think of it with a military perspective while I come at it thinking how can I learn more, to understand these people better because understanding can potentially inform policy.