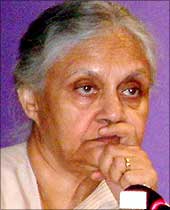 The austerity bug seems to have bitten the Delhi Government also with Chief Minister Sheila Dikshit asking her ministers and Congress MLAs to voluntarily take 20 per cent less salary, on Tuesday.

Dikshit issued a letter to all ministers and Congress MLAs asking them to follow the decision of the Congress Working Committee and party president Sonia Gandhi in practising austerity. The letter by Dikshit came after she received an All India Congress Committee communication on Tuesday asking her to implement austerity measures outlined by the Congress Working Committee last month. In her letter she asked MLAs and ministers to receive 20 per cent less salary for at least next one year.

Delhi Pradesh Congress Committee chief J P Aggarwal said he has also asked ministers and party MLAs in the city to practice austerity and donate 20 per cent of their salary for drought relief. "I sent a letter to all the ministers and MLAs asking them to follow the footsteps of our leaders Sonia Gandhi and Rahul Gandhi in practising austerity," Aggarwal told PTI. "I told them that we must follow our leader Sonia Gandhi who set an example by travelling economy class to Mumbai. Rahul Gandhi also travelled to Ludhiana in a chair car seat in the Shatabdi Express to set an example," he said.

Hypocrisy of the 'austerity drive' must stop Right Now!

The political class cares a damn about our money