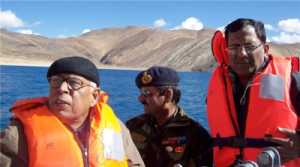 The extensive five-day-long visit that began on Friday assumes significance as it comes in the wake of last-week media reports of Chinese incursion in the Ladakh sector of the Line of Actual Control (LAC).

Vohra visited the famous Pangong Lake, located on the border with China.

Along with the senior Army commanders, the governor cruised in a motor boat, for about half an hour.

Situated at an elevation of 14,000 feet in the eastern sector of Ladakh, at a distance of 154 km from Leh, Vohra was presented the Guard-of-Honour by a contingent of the Army.

He also visited the Siachen base camp, interacted with the troops and had tea with them.

The governor lauded the officers and men of the Indian army, "for guarding the frontiers of the country in extremely difficult climatic conditions', adding that 'the entire nation is proud of their devotion and commitment".