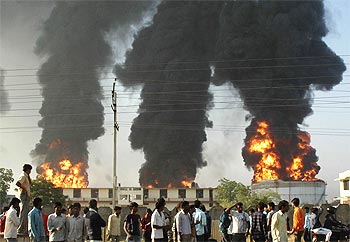 The devastating fire engulfing Indian Oil Company's fuel depot on the outskirts of the city continued to rage on Friday, 16 hours after it broke out claiming the lives of six persons and leaving 150 others injured.

Petroleum Minister Murli Deora, who rushed to Jaipur to take stock of the situation, said the fire has to die down on its own and there was "no other solution". "There is nothing else one can do.There is no other solution or alternative," he said when asked if the fire would continue to rage.

Black clouds of smoke were billowing from the tanks, and could be seen at least from a distance of ten kms on the Jaipur-Tonk highway. District Collector Kuldeep Ranka told PTI that a charred body was clearly visible near the IOC tank premises, but it was not possible to reach and recover it.

With the charred body lying in the premises, the toll has gone up to six though the government said four persons had lost their lives.

Rajasthan Medical and Health Minister Ahmed Durru Mian said one patient each was in a critical condition at the Mahatma Gandhi Hospital and SMS Hospital. Of the injured, 21 patients were hospitalised and rest discharged.

IOC-Petroleum officials were verifying records of employees present on duty when the fire broke out around 1930 hours yesterday in the densely populated Sitapura industrial area, about 20 kms from Jaipur, where dozens of engineering, medical and technical colleges are located.

"It would be premature to comment how many people are trapped inside.Let IOC officials come out with the list of employees who were present," Ranka said.

Assistant Fire Officer Bhanwar Singh Tyagi said the intensity of fire has been reduced to 75 per cent and by evening it would die down when the fuel gets fully burnt. Cold water mixed with foam was sprayed on the pipeline of LPG storage tankers located near the IOC-petroleum depot to keep it cool and unaffected from the heat generated from the fire.Gas valves of the pipeline were closed.

Residents of Sitapura, Pratapnagar, and nearby villages suffered breathing problems as the dense smoke had a suffocating affect on them. "People are advised to use mask or hanky", the collector said. A radius of five km was cordoned off in the Sitapura and Pratapnagar area, he said.

Rail and road transport on the Jaipur-Kota section up to Sawaimadhopur district was stopped or diverted as a precautionary measure. The Petroleum Minister visited the site and went to the hospitals to meet patients. He also held talks with Chief Minister Ashok Gehlot and Union minister C P Joshi, who belong to Rajasthan.|

Heavy plantation in the area minimised the impact of the blaze. Twenty-two fire tenders and about 135 fire personnelwere at the spot. Three columns of Army and about 200 Rajasthan Aarmed Constabulary personnel were also deployed in the area to keep people away and assist the civil administration in fire fighting operations. Educational institutions were closed in the nearby areas for the day.

The fire broke out at around 1930 hrs when petrol was being transferred from the depot to a pipeline and soon got out of control. A leak in the pipeline is suspected to have caused the blaze. IOC Chairman Sarthak Behuria told PTI that the fire broke out at a petrol storage tank and quickly spread to other tanks. Loud explosions were heard from a distance as the flames leapt.The fire also spread to some industrial units in a radius of three km destroying them.

Chief fire officer Ishwar Lal said 12 tankers containing one lakh kilolitre of fuel were affected by the fire.The blaze was visible up to 20 kms, with flames lighting up the night sky and clouds of black smokesurrounding the area. A five km area around the fire spot has been declared a "danger zone", said superintendent of police (traffic) Virendra Jhala.

Image: Smoke and flames billow from Indian Oil Corporation's fuel depot in Sitapura industrial area, on the outskirts of Jaipur.