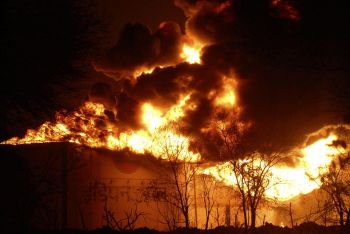 A massive fire broke out at the Indian Oil Coporation's fuel depot in Sitapura industrial area in the outskirts of Jaipur on Thursday night killing five people and injuring 150, the police said.

District Collector Kuldeep Ranka said three columns of army have reached the fire site, which is on the highway near the airport.

"The fire is massive. We are finding it difficult to douse it," Petroleum Minister Murli Deora said three hours after the fire spread to adjacent depots.

The fire broke out at around 7.30 pm and it may be several hours before it is completely brought under control. Deora said he was leaving for Jaipur on Friday.

Dr Ashok Pangudia, medical superintendent at Sawai Man Singh Hospital, said two people had been brought dead to the hospital, while one person was reported to have died in a private hospital. Some of the injured had splinter injuries, he said.

Huge flames shot into the air amid billowing smoke as hundreds of people in the villages in and around the depot panicked and fled from their homes. The fire also spread to some industrial units in a radius of 3 km destroying them.

Rajasthan Chief Minister Ashok Gehlot said the assistance of army was being sought to help douse the fire. Some army jawans joined the rescue operations.

The injured were rushed to Mahatma Gandhi and SMS hospitals. Some of them had serious burn injuries.

IOC Chairman Sarthak Behuria said the fire broke out at a petrol storage tank and quickly spread to other tanks. The police said several explosions were heard.

The walls and glass panes of some of the colleges were damaged by the explosions that followed the fire in the depot.

"There are about 30 fire tenders on the scene doing their best to break the fire but it's very difficult when its split among several storage facilities like this," Rajasthan Director General of Police Harish Meena told reporters.

He said a leak in the oil pipeline could have triggered the fire.

Quoting an IOC official, he said the strategy at present appears to be to let all the fuel burn itself out probably by tomorrow morning before the blaze could be brought under control by fire-fighting efforts using water and foam.

Lal said even use of copters to spray water on the fire would not effective, given the intensity of the blaze and fire tenders won't be of any use unless they can reach within 300 metres of the fire site.

Besides, the flames are so powerful that even if water is sprayed it will evaporate in the heat, he said.

IOC's LPG head Subroto Verma said all LPG tanks in the vicinity of the incident are safe.

Ishwar Lal said it would be "devastating" if the fire engulfs the LPG tanks too.

Additional Director General of Police (Law and Order) Navdeep Singh said two companies of the Rajasthan Armed Constabulary have also been deployed to control the crowd at the fire site and evacuate people to safer places.

Hours after it began, the fire was still burning out of control and had engulfed most of the depot, including the four main oil storage units, covering an area of several square kilometres.

The blaze was visible from up to 20 km away, with flames lighting up the night sky and clouds of choking, black smoke billowing over the surrounding area.

A 5 km area around the fire spot has been declared a "danger zone", said Superintendent of police (traffic) Virendra Jhala.

Meanwhile, Rajasthan government announced Rs 2 lakh as compensation to the next of the kin of those who were killed in the fire.

Chief Minister Ashok Gehlot, who presided an emergency cabinet meeting late this evening in the wake of the fire, said Rs 1 lakh would be given to the seriously injured and Rs 50,000 to those who suffered "normal" burn injuries.

He said all private hospitals have been asked to treat the injured and the government foot the bills of their treatment.

Image: Indian Oil Corporation's fuel depot is on fire in Sitapura industrial area on the outskirts of Jaipur | Photograph: Reuters