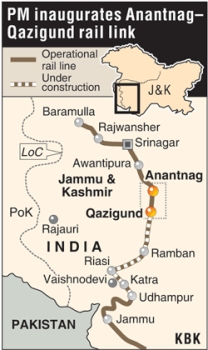 Dr Singh reached out to all sections of the society in Jammu and Kashmir on Wednesday and urged them to engage in a meaningful dialogue to ensure permanent peace in the state.

"I once again reiterate that we are ready to talk to every person who shuns violence and is interested in peace and development here," he said at the inauguration of the Anantnag-Qazigund rail link.

He also referred to the past meetings the Centre has held with different groups from the state.

"We have had many round-table conferences with them in the past and all issues were discussed. We tried to give voice to the demands of all sections of the people. We have implemented a number of initiatives as a result of this process. We are ready to talk to every section of the society here to take them along for development and prosperity of the state," said the PM.

During his speech, Dr Singh reached out to the youth, saying, "The youth must seriously think about their future. The Centre will do everything possible to engage the local youth in the development of the state".

He added that the youth were capable of making progress in the field of information technology like the other states in the country.

"Two central universities are coming up here, one in Jammu and the other in the valley. Kashmir's beauty is unparalleled and it is capable of becoming the most sought after tourist destination in the world," he said.

The PM also congratulated the people of the state for turning up in good numbers during last year's assembly polls and parliamentary elections this year.

"I am happy that the people of Jammu and Kashmir turned up to vote in these elections (assembly and parliamentary polls) in large numbers," Dr Singh said and added, "I believe that it was a vote for a peaceful path to a better tomorrow. I applaud the wisdom and good faith of the common man of Kashmir."

"The elected government has a golden opportunity to consolidate peace in the state," Dr Singh said.

In the last five years, the Centre has taken a number of steps to bring development to Jammu and Kashmir, he said.

"We took the bold step of reviving the movement of goods and people across the Line of Control on Srinagar-Muzaffarabad road and on Poonch-Rawalakot road. I am hapy to announce that the Centre has decided to fund the additional cost of Rs 385 crore to build the heritage Mughal Road that will connect Shopian in south Kashmir with the remote areas of Poonch and Rajouri in Jammu region," he said.

The PM also advised the state government to hold elections to local bodies in the state as early as possible, so as to increase people's participation in the development process.

"I would urge that elections to local bodies be held quickly. This will increase people's participation in the process of development," Dr Singh said.

Panchayat elections in the state have not been held since the term of the civic body expired in 2006. Asking the state government to speed up the process of development, Dr Singh said, "Unprecedented resources have been committed to the state for its comprehensive reconstruction. But I recognise that the benefits are trickling down slowly. This state of affairs should change. We have to speed up the pace of development."

Dr Singh also talked about the reversal of brain drain, and said, "We have to create conditions for them (intellectuals) to return and be the instruments of change and development."

The PM said that his government wants to strengthen the state government, so that they can implement an ambitious development agenda.

United Progressive Alliance chairperson Sonia Gandhi, who is also accompanying Dr Singh, said that there are no issues that cannot be resolved through talks under the principles of democracy.

SP not to field candidates against Sonia, Rahul