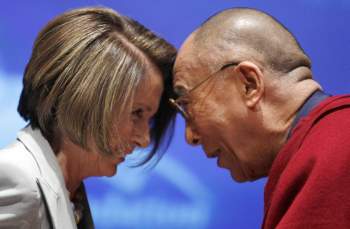 Even as United States President Barack Obama refused to meet the Dalai Lama fearing diplomatic backlash from China, the exiled Tibetan leader was honoured with a human rights award at the Capitol Hill on Tuesday.

The spiritual leader received a human rights award from US House Speaker Nancy Pelosi and met with powerful lawmakers on a visit to Washington overshadowed by Obama's decision to delay a meeting with him. Pelosi gave the inaugural Lantos Human Rights Prize to the Dalai Lama, honouring his commitment to ending global injustice.

"The Dalai Lama is one of the most highly honoured peacemakers of our time," Pelosi was quoted as saying by the CNN. People continue to be inspired by the Dalai Lama's messages of peace and non-violence, the California Democrat said, before presenting the award, which contains the words, "The rights of one are the rights of all."

The award is sponsored by the Massachusetts-based Lantos Foundation for Human Rights and Justice, named after the late Repeublican Tom Lantos, who was the only Holocaust survivor in Congress. He died of cancer in February 2008.

The Tibetan leader is in Washington for a conference and to meet with Undersecretary for Global Affairs Maria Otero, who has just been named President Obama's special coordinator on Tibet, said State Department spokesman Ian Kelly.

The Dalai Lama and Obama will not meet until after Obama's China visit in November. The Obama administration does not want to anger China, as the US president will seek support for his crucial foreign policy, economic and environmental goals during his visit to the Communist nation. China has accused the Tibetan leader of trying to split Tibet from the rest of China.

"The bonds of friendship between the United States and His Holiness and the Tibetan people are strong and durable as ever," Pelosi, the Democratic leader in the lower House, said at the ceremony.

Incidentally, the Dalai Lama has met with the last three sitting US presidents during his visits to Washington.

Pelosi expressed hope that the Chinese Government would take up the Dalai Lama's offer of direct engagement and work towards a peaceful resolution of the Tibetan issue. "For more than 20 years His Holiness has advocated for Tibetan autonomy within the framework of the People's Republic of China. His Holiness has expressed a desire to visit China and to engage directly with Chinese officials," Pelosi said .

"It is our hope that the Chinese government will welcome this opportunity for a peaceful resolution of the issue of Tibet," Pelosi said. "The cause of Tibet is a challenge to the conscience of the world. We must not fail to meet that challenge. In fact, unless we speak out for human rights in China and in Tibet, we lose all moral authority to talk about human rights anywhere in the world," she said.

Reading out form the citation, Pelosi said: "The Lantos Foundation for Human Rights and Justice hereby awards its inaugural Lantos Human Rights Prize to the 14th dalai lama, Tenzin Gyatso, the religious leader of the Tibetan people." In his acceptance speech, the Dalai Lama said: "For me to receive this award is a truly great privilege, especially in that the award is named after an individual whom I admire deeply and who made tremendous contributions to the human rights in the world."

Referring to India, the Tibetan spiritual leader said though New Delhi gained independence six decades ago, Indians still need spirit of its freedom fighters. "They're selfless, fearless, truthful, dedicated. That spirit, I think, I usually is telling my Indian friend, although you enjoy independence and the many progress there, good. But still the country as a whole, lot of problems, a lot of poverty. So still need that kind of spirit," he said.