'One more 26/11 attack could have huge consequences' 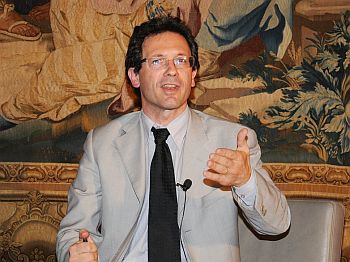 Christophe Jaffrelot, the renowned expert on international relations and religious politics in the Indian sub-continent, explains why Pakistan has become the problem instead of being the solution.

"One more 26/11 attack could have huge consequences," says Christophe Jaffrelot.

"India has been targeted many times. If you look at the casualties of terrorism, India comes fourth, after Iraq, Afghanistan and Pakistan," says Dr Jaffrelot, a senior research fellow at the French Centre for International Studies and Research and Alliance Visiting Professor of International and Public Affairs at New York's Columbia University.

Relying on his considerable experience in the subcontinent, and an exhaustive knowledge of religious politics there, Professor Jaffrelot discussed why Pakistan should be more important than Afghanistan to the world, at a talk at the French consulate general in New York.

The good news, he says, is that the judiciary forced President Pervez Musharraf to step down, to hold real elections for the first time in 12 years. The new army chief, General Ashfaq Parvez Kayani, said he is not interested in ruling the country, but in rebuilding the military that has been ruling Pakistan for 10 years.

But the Pakistan Peoples Party, the Pakistan Muslim League and the Awami National Party have not changed in the past 15 years. They represent elite groups -- landowners, landlords, businessmen, tribal chiefs -- they indulge in nepotism, are dynastic in nature and have no interest in changing the social status quo, Professor Jaffrelot says, adding that, consequently, they lack legitimacy in the public eye.

"Pakistan has never seen democracy because the power has never been in the hands of the civilians," he says.

The army and, within it, the Inter-Services Intelligence, still control nuclear weapons and policy matters about Afghanistan, Kashmir etc, he says.

"When the prime minister and the president -- Yusuf Raza Gilani and Asif Ali Zardari -- tried to regain (control of) the ISI, Kayani vetoed the idea, saying it was too precious to give to civilians," he says.

The result is that the Pakistan army, while still very strong, is not a very reliable partner in the fight against global terrorism, says Professor Jaffrelot.

According to him, the Pakistan army has always promoted Islamic militants in Afghanistan, a collaboration that started with the first Afghan war against the Soviet Union. It also supported Islamic jihadis in Kashmir.

While the army officially severed its links with Islamic groups after 9/11, these groups were sent underground to be 'born again' under different names.

This ambivalent attitude of the army towards such extreme groups has lead to some major problems for Pakistan, he says.

For one, they had to deal with a resolute and resilient Al Qaeda-Taliban network in North and South Waziristan, part of the Federally Administered Tribal Areas, which the government had left alone to be managed with the local tribal leaders' brand of Shariat. The result was that the area continued as it always had -- effectively as a state within a state, observes Professor Jaffrelot.

"This is part of the invincibility myth that is now crystallising, (one that suggests) you can't rule these places," says Professor Jaffrelot. "While it is historically true that these areas have never been territories of nation-States, it was worrying that it is now also home to militants and ill-conceived drone attacks that have claimed enough civilian lives, thus driving more recruits to the terrorist groups," he says.

Western powers had put pressure on Pakistan to put its house in order but after three military operations, the Pakistani army finally made deals with these tribal groups.

The current operation, using 28,000 troops, is taking on about 10,000 well-armed and fortified militants -- and these include foreign militants. This operation, says Professor Jaffrelot, is a test of whether the Pakistani army is willing to take the battle to its logical conclusion. But he then points out that the Indian Army needed many more troops to put down the Khalistan movement in 1984.

He also points out that the Pakistani army had targeted only South Waziristan, making deals with the militants in North Waziristan. The army also went on the offensive only in October -- instead of immediately after the Swat Valley offensive, as originally planned -- and they have just a few weeks to take control of the situation before winter sets in.

Professor Jaffrelot highlights the role of the Haqqani family network, which he described as the oldest friend of the ISI. The family is allegedly inked to the bomb blasts at the Indian embassy in October.

"It's as if the (current) operation was, first, insufficient, and second, targeted at those who are not the best friends of the ISI in the region," he says, adding that the Pakistani army cannot alienate the Haqqani network, as they need it to counter the growing Indian clout in Afghanistan.

If the North Atlantic Treaty Organisation troops withdrew, he pointed out, it would be foolish for the Pakistan army to attack those who will be in power in Kabul.

The State is not only losing ground in Pashtun areas but also in the Pakistani heartland. Even in Islamabad, in the state of Punjab, where people are known to have more national pride, there have been many attacks in the recent past -- on institutions and senior army officers, ostensibly as an attempt to dissuade the military action against militants in South Waziristan.

The involvement of Usman Mohammed Aqeel, a former major in the Army Medical Corps, in the attack on the army general headquarters in Rawalpindi, Punjab, was another blow to the Pakistan army.

Most importantly, says Professor Jaffrelot, what was seen as merely a Pashtun problem has become a Pashtun and Punjabi problem.

Punjab has a pivotal role in Pakistan, as it is the recruiting ground of the army and home to 55 per cent of Pakistan's population. If the recent attacks in Punjab were only to dissuade the army, he says, the matter is not so serious; but if it was an attempt to destabilise Pakistan, it certainly is.

He points out the view of his friend Dr Ayesha Siddiqa Agha, a security analyst and a columnist in the Dawn newspaper that south Punjab is on the verge of Talibanisation.

He says there are two traditions of radicalisation in Punjab: Sectarianism in the form of the Sunni-Shia conflict, and that of jihadis, like the Lashkar-e-Tayiba, operating in Kashmir. But now the Sunnis and jihadi groups have come together to attack the Pakistani State. The Lashkar, he points out, has never before attacked Pakistan.

"The dissemination of violence, of terrorism, has its origin in Pakistan," he said, citing the case of the terror attacks on Mumbai in November last year.

"We now know for sure that these attacks were planned in Pakistan and that the Lashkar was responsible for it. The Pakistan government itself has acknowledged that and is organising a trial," says Professor Jaffrelot.

The only solution is to replace a policy of AfPak with Pak-Af, he says, by giving Pakistan's problems priority over those of Afghanistan.

'US general in Afghan plotting against Pak military'