What India needs to do in Afghanistan 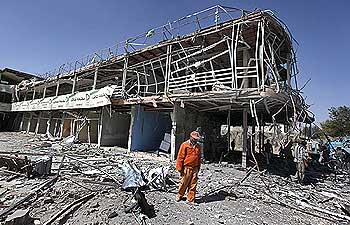 Image: The blast site at Indian embassy in Kabul where a blast killed 17 people on October 8
Photographs: Ahmad Masood/Reuters

Shanthie Mariet D'Souza, an associate fellow with the Institute for Defence Studies and Analyses, New Delhi, traces the future of India-Afghanistan relations.

The October 8 attack on the Indian embassy in Afghanistan, a grim reminder of a similar attack on July 7, 2008, has yet again highlighted the challenges of India's involvement in Afghanistan. While the Haqqani network aided by the Inter Services Intelligence had been blamed for the July attack, this time the Taliban has claimed responsibility for the attack by posting a statement on a website (shahamat.org). The site is now dysfunctional..

The actual perpetrators of the attack would enjoy the benefits of deniability guaranteed by the complexity of the Afghan insurgency. The growing bonhomie between India and Afghanistan coupled with the increased presence of India's development projects in that country, remains the target of the Taliban-led insurgency, which includes a huge array of insurgent and anti-government forces operating in tandem beyond south and east Afghanistan, with increased symbolic and high profile attacks around Kabul

Moreover, as the debate in the US intensifies about the nature of the Afghan war and about increasing the troops or limiting the 'long war', coupled with the political stalemate in Kabul in the aftermath of the August 20 polls, is playing into the Taliban propaganda. In contrast, India's unwavering role in long-term stabilisation continues to pose a significant challenge to the Taliban and its supporters, who view India's assistance as strengthening the present democratic regime in Kabul. 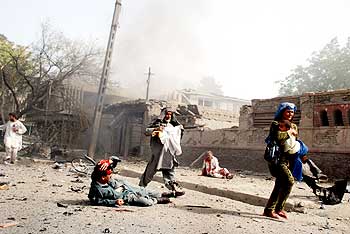 Image: Locals flee the scene of suicide attack on the Indian embassy in Kabul on July 7, 2008
Photographs: Pajwak News Agency/Reuters

Despite the loss of fewer lives, mostly visa-seekers, compared to the July 2008 attack -- which killed 58 people, including three Indian officials -- mostly because of the reinforced security arrangements, the October 8 attack did deliver the message of intimidation. Intended as a warning to India to downsize its role, the attack was in a way aimed at raising the costs of such a policy of 'winning hearts and minds' of the local Afghans.

The attack comes at a time when there is an increased scrutiny on India's role in Afghanistan as said by US top commander in Afghanistan General Stanley McChrystal in a recent confidential report.

He said, 'Indian political and economic influence is increasing in Afghanistan, including significant development efforts and financial investment'. While acknowledging that 'Indian activities largely benefit the Afghan people', he pointed out that 'increasing Indian influence in Afghanistan is likely to exacerbate regional tensions and encourage Pakistani countermeasures in Afghanistan or India.'

Such thinking finds resonance among Western analysts, who posit that "the road to peace in Afghanistan runs not just through Kabul and Islamabad, but Delhi as well". This in turn works well into the Pakistani support of Taliban in its quest for 'strategic depth' and reinstating a pliant regime in Kabul.

As instability and violence in Afghanistan intensify, and policy-makers in the United States are grappling to get the right strategy (counter-insurgency or counter-terrorism), New Delhi has indicated a 'strategic shift' of thinking from a military to political solution to the Afghan war.

In an interview to the Wall Street Journal on the sidelines of the UN General Assembly in New York, External Affairs Minister, S M Krishna said India did "not believe that war can solve any problem and that applies to Afghanistan too." There has been a significant shift in New Delhi's thinking in the ensuing political uncertainty of the recently held Afghan polls where allegations of fraud have marred the early claims of victory of incumbent President Hamid Karzai. Afghanistan's election commission has called for a runoff on November 7 after investigations dropped incumbent Hamid Karzai's votes below 50 percent.

Alternatively, intense diplomacy to cobble together a national unity government is being explored to avoid a scenario of 'run-off'. Without a legitimate government in place, the troop surge could come to resemble foreign occupation. Such concerns confront President Obama who awaits the resolving of the political stalemate before sending more troops to that country.

India has expressed its support for a 'national unity' government. There is also recognition of the need for reconciliation process in building a politically inclusive order.

In an international closed-door seminar held recently, India's foreign secretary made a specific reference to "reintegration of individuals within mainstream". This could have been construed as weaning away the reconcilable tribal fighters from the ideologically hardened leadership -- "separating the fish from the pond" -- a classic counter-insurgency principle that India has used in its own counter-insurgency campaigns.

This could have triggered a response mechanism of attack on the embassy to project the Taliban as not amenable to talks or reconciliation, thus denying India a larger political role in Afghanistan. 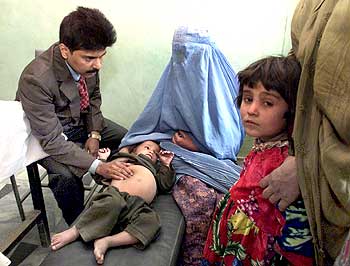 India, being the sixth largest bilateral donor has pledged around US $1.2 billion (Rs 56 billion) in several reconstruction and development projects within Afghanistan.

While there is no denying the fact that India's strategic interests lie in long-term stabilisation of the country, most of these projects are directed at capacity-building and triggering economic growth.

India has been providing educational and vocational scholarship; health services; dug tube wells all across the country; and is now building Afghanistan's Parliament structure. One of the most visible and strategic projects is the 218 km-long Zaranj Delaram road connecting a land-locked Afghanistan to the Iranian port of Chabahar. The road reduces Afghanistan's dependence on Pakistan to providing a potential alternate route connecting Central Asia.  However, optimal utilisation of this road would require greater security mechanisms. Image: A worker with blankets delivered from India as he unloads a plane in Termez, on the Uzbegistan-Afgha
Photographs: Shamil Zhumatov/Reuters

Interestingly, India's "aid diplomacy" in Afghanistan has generated an intense domestic debate, given the vulnerabilities Indian projects and personnel face in that country. While some would want India to send troops, others propound continuation of the present 'aid only' policy. While the latter option would not be in India's long term strategic interests, outright military response of troop deployment, apart from its limited utility, would work straight into propaganda of the Taliban and its sponsor.

What India needs in the near term is a reinvigorated policy in terms of protecting its projects and carving out a larger regional role in the long-term stabilisation of Afghanistan. Amidst talks of US withdrawal, India needs to consider long-term scenarios on its political, diplomatic and military options.

In a revamped diplomatic strategy, India could work towards the creation of a 'Concert of powers' -- a regional grouping including the US, Russia, the European Union, India, Iran, the Central Asian Republics and China.

While the American policy-makers are looking for an 'exit strategy', Indian policy-makers will have to take bold and innovative ideas of regional mechanisms for anti terror activities in the region. There is a need for seamless information sharing, joint patrolling, border regimes and confidence-building measures among the regional powers.

On a local level, India needs to widen its web of engagement beyond the Karzai government.

India's Afghan policy in the past few years has alienated its traditional support base among the Northern Alliance groups who have increasingly aligned with Iran.

There are alienated Pushtun communities in Southern and Eastern Afghanistan, who need Indian support in building local capacities. These groups can be cultivated as protectors of Indian aid projects by making community participation and local ownership a key plank of the aid policy in troubled south and east Afghanistan.

On the military front, India can enhance the training programme for the Afghan national police for counter-insurgency purposes, given India's experience in building a COIN grid in Jammu and Kashmir.

The Obama administration is caught in a dilemma between heeding to its topmost military commander's request of sending more troops or limiting the war. Irrespective of the decision the US takes regarding its future in Afghanistan, India needs to remain engaged in that country, albeit with a clearer strategy and renewed commitment.
More
Print this
article
ALSO
READ
MOST
RECENT