News
Business
Movies
Sports
Cricket
Get Ahead
Money Tips
Shopping
Sign in  |  Create a Rediffmail account
Rediff.com  » News » So who was really responsible for Partition?

So who was really responsible for Partition? 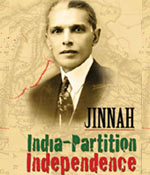 Jaswant Singh's book has raised a fresh controversy on who was responsible for the Partition of India. Some think it was Mohammed Ali Jinnah; others say Jawharlal Nehru/Sardar Patel. The truth is that the seeds for Partition were sown at least 80 years before Partition actually happened.

Dr B R Ambedkar wrote in 1941, 'The curious may examine the history of the 1857 mutiny, if he does, he will find that in part at any rate it was actually a jihad proclaimed by the Muslims against the British that owing to the occupation of India by the British the country had become Dar-ul-Harb' (See Thoughts on Pakistan). This is substantiated by Professor Sheshrao More in The 1857 Jihad (Manas Publications). It is because Muslims took an active part in the 1857 mutiny that the British were anti-Muslim in the early post-mutiny period.

With the advent of British rule Muslim insecurity leapfrogged.

The condition of Muslims was best stated by a liberal, R M Sayani, in his presidential address at the 12th session of the Congress in 1896: 'Before the advent of the British in India, the Muslims were the rulers of the country. The rulers and their chiefs were Muslims, so were the great landlords and officials. The court language was their own (Persian was the official language of India till 1842) The Hindus were in awe of them. By a stroke of misfortune, the Muslims had to abdicate their position and descend to the level of their Hindu fellow-countrymen. The Muslims resented the treatment.'

Sayani argued that when the British introduced English education in the country, the Hindus embraced it, but Muslims resented competing with the Hindus, whom they once regarded as their inferiors. Hence Muslims were gradually ousted from their lands and offices, while Hindus rose under the Raj [History and Culture of Indian People, Bhartiya Vidya Bhawan, Vol. X: 295]

Sir Syed Ahmad Khan came at a critical juncture in the 1870s, and worked for a political rapprochement with the British. They were swayed in 1857, but a little tact and generous forgiveness could change Muslims into loyal supporters. Sir Syed conceived the idea of a Muslim college like Oxford and Cambridge -- the Muhammadan Anglo-Oriental College at Aligarh. At Meerut, on March 16, 1888, Sir Syed referred to Hindus and Muslims as two nations, in fact as two warring nations who could not lead a common political life if ever the British left India.

For the British, Sir Syed's overtures came at a very opportune moment. After two generations of English education, Hindus showed signs of political development. The British seized the opportunity offered by Sir Syed of enlisting the support of the politically undeveloped Muslims as a counterpoise to the progressive Hindu community.

Differences were accentuated in connection with the legislation for local self-government on an elective basis, and for the first time a demand was made for separate representation for Muslims. Said Muhammad Yusuf on May 3, 1883, "But it would be an advantage and more fit recognition of the claims of the Muslim population if provision could be made in the bill for the election of Muslims by reserving a certain number of membership for that community."

The divide was visible in the number and frequency of Hindu-Muslim riots thereafter.

The British role in India's division is best summed up by Sardar Patel. He said on August 9, 1945, "The British talk of Hindu-Muslim quarrels, but who has thrust the burden on their shoulders? Give me just a week's rule over Britain; I will create such disagreements that England, Wales and Scotland will fight one another for ever" (Patel -- A Life by Rajmohan Gandhi).

So when was Pakistan conceived? Dr Ambedkar wrote in 1941, "There is evidence that some of them knew this to be the ultimate destiny of the Muslims as early as 1923. In support of this reference may be made to the evidence of Khan Saheb Sardar M Gulkhan (who was president, Islamic Anjuman, Dera Ismail Khan) who appeared as witness before the NWF Committee to report upon the administrative relationship between the settled area of NWFP and the tribal area and upon the amalgamation of the settled districts with Punjab.

"Many believe the Khilafat Movement (1919), a protest by Indian Muslims against Turkey's abolition of the Caliph, religious leader of the Arab world, to be the first step towards India's Partition. Gandhi spearheaded this movement but failed to realise that the Pan-Islamic idea cut at the very root of Indian nationality. What did the movement achieve?

"First, Muslim fanaticism secured a position of prestige in Indian politics; thereafter their religious loyalty took precedence over national loyalty. Two, the Muslim population hitherto divided among various groups and political pulls now became a solid force. Three, a new fanatic leadership riding on the crest of the Khilafat wave came to wield the reigns of the Muslim leadership."

Could the Hindus have avoided Partition? Not if you believe the above-quoted words of Dr Ambedkar.

The British had ensured that the armed forces consisted primarily of Muslim soldiers from the area that is modern day Pakistan. They sought to justify this predominance by saying that men of the north-west belonged to the martial classes.

Some studies show that the predominance of the men of the north-west took place as early as the mutiny of 1857, some 20 years before the theory of martial and non-martial classes were projected in a distinct form in 1879. Their predominance was due to the fact that they had helped the British suppress the mutiny in which the Bengal army was completely involved. The British changed the composition of the Indian army between 1914 and 1930.

After 1930 there is no information available on the communal composition of the Indian Army. Some believed that Muslims constituted 60-70 percent. Obviously it was high enough to cause alarm to the Hindus. Veer Savarkar was probably one of the few leaders who kept exhorting Hindus to join the Indian Army in large numbers.

My conclusion, hence, is that:

It is a myth that Nehru, Jinnah or Patel were responsible for Partition. They were merely implementing a partition plan scripted in the 19th century.

Hindus were apprehensive that Muslims wanted to rule India again. Muslims feared that under the principal of one man one vote, it would be a government for and by the Hindus.

Separate electorates for Muslims, reservations, caste and religion-based divisions are some of the tactics used by the British to divide India

All those who wish to know the underlying thoughts behind Partition should read Dr B R Ambedkar's book Thoughts on Pakistan back to back.

Sanjeev Nayyar is the founder of www.esamskriti.com

Taiwan thanks India for support amid China tensions

The case for and against Jinnah