Why India cannot take on China 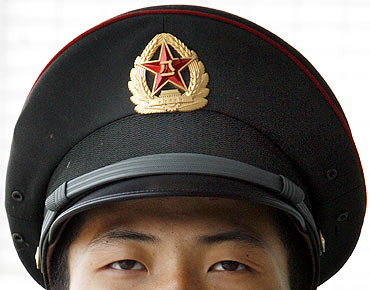 Image: A People's Liberation Army soldier keeps watch at a military camp in Beijing
Photographs: Claro Cortes IV/Reuters Harsh V Pant
Harsh V Pant believes that China poses a challenge to India in the short and medium term because in the long term we are all dead.
Once again, the spectre of China looms large over India. The debate on the 'China threat' is back on the front pages of newspapers.

Prime Minister Manmohan Singh has chaired another meeting of the Cabinet Committee on Security to review India's ties with China and Defence Minister A K Antony has also reviewed the security situation in the wake of reports suggesting the presence of Chinese soldiers in Pakistan occupied Kashmir. 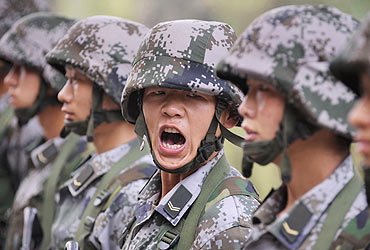 Image: Soldiers of the Chinese People's Liberation Army at a training session in Taiyuan, Shanxi province
Photographs: Reuters
It was just last year that similar discussions and debates were underway.

After denying for months, the Indian government had to finally conceded that Chinese soldiers were in fact acting provocatively. Indian strategists had even come up with a date as to when China might attack India.

And then it all got quiet. The media moved on to other stories.

The government got entangled in other problems and there were a plethora of issues to keep the establishment busy from Pakistan to Naxalism to Afghanistan.

And the apologists for China found something to talk about -- the great Sino-Indian rapprochement! 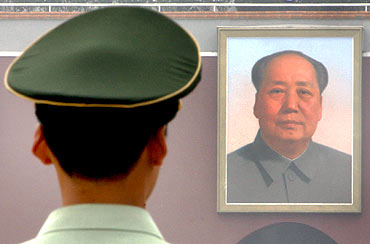 Image: Tiananmen Square, Beijing
Photographs: Claro Cortes IV/Reuters
The fact that China sided with India during the Copenhagen Summit to scuttle the global climate change negotiations was heralded as the new beginning in Sino-Indian ties.

Environment came to the rescue of Chindia brigade and as if on cue, Jairam Ramesh went to China to criticise his own government's China policy for being too aggressive!

Meanwhile, Beijing was carefully pursuing its agenda vis-a-vis the rest of the world, including India.

Recognising a weak Barack Obama administration as an opportunity, it upped the ante and its assertion of its place in global inter-state hierarchy reached its acme.

It not only declared its intention of selling new nuclear reactors to Pakistan in clear violation of international guidelines but also challenged the territorial claims of its neighbours in the South China Sea.

China has questioned the status of Kashmir 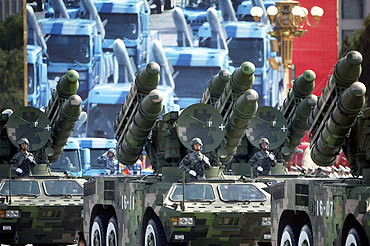 In so doing Beijing has not only underlined, once again, its tilt towards Pakistan on the Kashmir issue but has also openly questioned the status of the state.

This combined with the presence of more than 11,000 Chinese troops and missile silos in Gilgit and Baltistan changes the security environment for India in a significant measure.

There is, however, nothing surprising in what China has been trying to do.

China is asserting its territorial claims more vigorously everywhere and India is no exception. 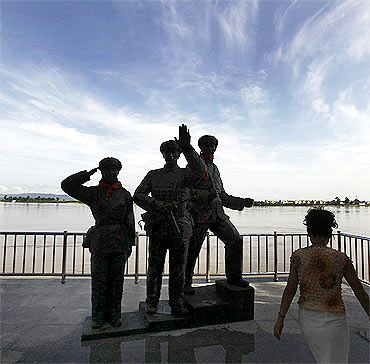 Image: A People's Volunteer Army statue on the bank of the Yalu river
Photographs: Jason Lee/Reuters
New Delhi can complain about it all it wants but it can't alter the geopolitical reality of a rising China trying to shape its strategic environment to serve its own interests.

It is India's problem that Indian policy-makers have failed in their responsibility in countering China.

What had stopped them for the last several decades from upgrading India's border infrastructure or from paying due attention to the lack of economic development in border areas or from intelligently investing in military capabilities?

But a perceptible lack of strategic orientation has continued to hobble Indian approach towards China.

Even as late as last year when China was upping the ante vis-a-vis India, the Indian government's China Study Group was suggesting that China would pose a real challenge only over the long term. 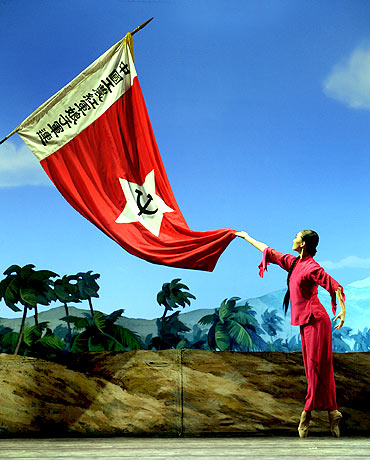 Image: A dancer from the National Ballet of China during a performance at the Tanggu Great Theatre
Photographs: Jason Lee/Reuters
There was little realisation that better connectivity and improved infrastructure has allowed China to conduct more aggressive patrolling, resulting in increased incidents of border transgression.

China poses a challenge in the short and medium term because in the long term we are all dead.

But China says a few soothing words, it signs a few high-sounding joint communiques with Delhi, it offers an olive branch on global trade and environment issues and New Delhi is flattered.

It is Chinese actions that matter and there the evidence has always been clear. Now the Indian government is talking of monitoring Chinese intentions.

One has to wonder how a government that can't even keep tabs on China's growing might plans to get into the heads of Chinese Communist Party mandarins to divine their intentions.

It is clear that China will not rise peacefully 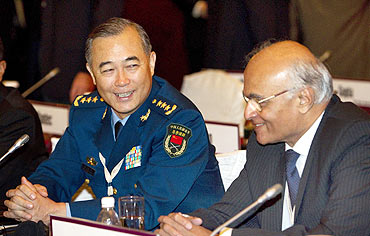 Image: Chinese General Ma Xiaotian and National Security Adviser Shiv Shankar Menon
Photographs: Vivek Prakash/Reuters
Unlike military capabilities, which can be seen and counted, intentions cannot be empirically verified and so are difficult to discern.

It is Chinese capabilities that need to be carefully assessed and prompt actions are needed to evolve a strategic policy to deal with the challenge of a rising and ambitious China.

History and China's recent behaviour makes it clear that China will not rise peacefully.

International politics is a ruthless enterprise and unless Indian policy-makers are clear-eyed about Indian national interests, there is no way New Delhi can successfully take on Beijing.

But India has a government that can't even speak in one voice on crucial external and internal security challenges and has ended up providing ammunition to nation's adversaries.