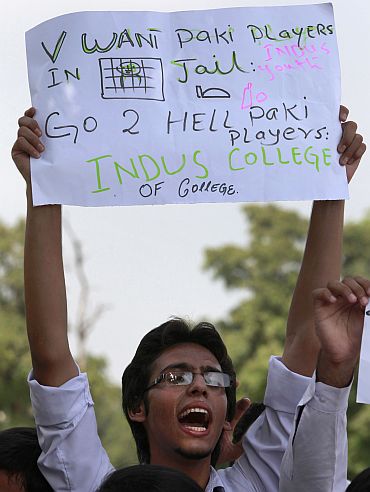 Image: A Pakistani student holds a placard as he shouts slogans against national cricket team players who are involved in a match fixing scandal, during a protest in Islamabad
Photographs: Faisal Mahmood/Reuters Sushant Sareen

Sushant Sareen says that denial, obfuscation and stone-walling have become something of a national malaise in Pakistan.

In a country where an extremely wealthy and well-connected member of Islamabad's social elite unabashedly introduces himself as an "importer and manufacturer of Bollywood CDs" -- a euphemism for piracy of Indian films and music -- why blame cricketers for fixing matches for money?

If anything, the outrage, not to mention shame that many Pakistanis are feeling after the remarkable expose of the rampant match-fixing by Pakistani cricketers sounds quite incongruous to the culture of corruption that seems to have seeped deep into every pore of Pakistani life.

Increasingly, Sir V S Naipaul's description of Pakistan as a 'criminal enterprise' is sounding more and more true and Gresham's law -- bad money drives out good money -- has pervaded all spheres of national life, with decent, enlightened and honest citizens being reduced to an anachronism.

People readily lap up the most bizarre allegations 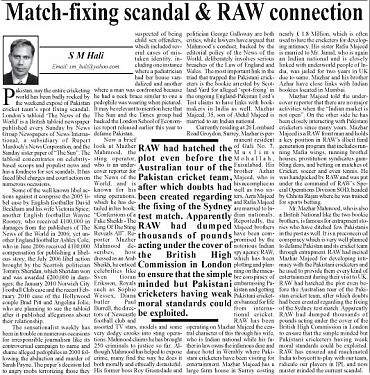 Image: A screenshot of an article in the Pakistan Observer about possible RAW involvement in the spo-fixing scandal

To be sure, something of this sort is also happening in India, what with one notorious match-fixer becoming an 'honourable' member of parliament, and another being a permanent fixture on a television channel to analyse cricket matches.

The Indian attitude to corruption, however, pales before the chutzpah of the Pakistanis in brazening out irrefutable charges of wrongdoing.

Forget about being contrite, the standard response of the Pakistanis when caught with their hand in the till is to first demand such exacting standards of proof that even God almighty will not be able to provide.

Strangely, these same people readily and unquestioningly lap up the most bizarre allegations as proof of guilt of 'others' without even a shred of evidence to back these allegations -- for instance, RAW backing the Baloch separatists and the Tehrik-e-Taliban Pakistan, Mossad and CIA sponsoring terrorism in Pakistan.

A conspiracy theory can't be complete without an Indian angle 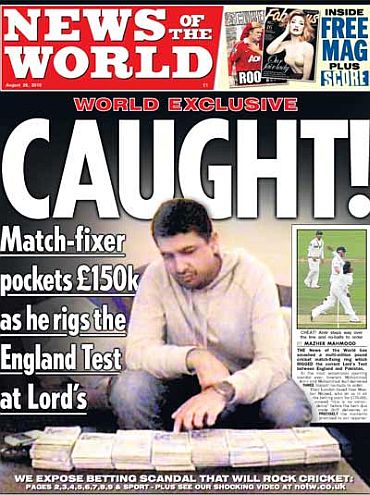 Image: The News of the World edition that shook the cricketing world once again

Even as they insist upon the need to 'qualify and quantify' the evidence, they start working overtime on building up elaborate, if totally convoluted, conspiracy theories involving India (read Hindus), Americans and British (read Christians and 'crusaders'), and Israelis (read Jews), all working in concert to malign Pakistan.

True to form, on the day that the spotgate scam hit the headlines in Pakistan, a 'mainstream' newspaper, Pakistan Observer -- mainstream not in terms of circulation, which is negligible, but because it is considered to be the unofficial mouthpiece of the Inter Services Intelligence, which is as mainstream as you can get in Pakistan -- alleged that the entire scandal was "part of a greater psy-ops...to demoralise the Pakistani nation" and that the reporter who carried out the sting operation was "known for his bids [sic.] to implicate Muslims"!

Taking the cue, 'imbedded' TV anchors have started mounting a spirited defence of the accused players, pointing to the so-called inconsistencies in the reportage of the sting operations, raising questions over the intention behind the sting, and of course, hinting at the ubiquitous Indian angle, without which a conspiracy theory in Pakistan can never be complete.

But why blame Salman Butt? 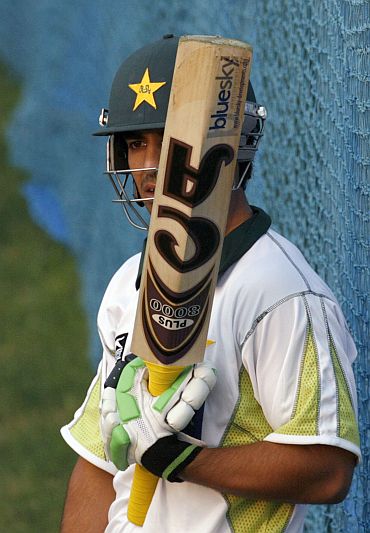 Not surprisingly, the tainted captain of the tainted team, Salman Butt did not bat an eyelid in dismissing the charges and saying "these are just allegations and anybody can stand out and say anything, it doesn't mean they are true."

But why blame Butt?

He probably drew inspiration from the Pakistani authorities who whenever confronted with damning evidence of involvement in terrorism -- a classic example being the 26/11 attacks -- adopt exactly the same approach.

Remember, it took Pakistan weeks to even admit that the beast called Ajmal Kasab was a Pakistani?

Don't also forget that when the London School of Economics report on how the ISI was running the Taliban insurgency in Afghanistan was released the Pakistanis went red in the face denying all charges of playing a double game.

However, when within days of the LSE report the wikileaks revelations were made, the same Pakistanis explained these away by saying that this was all old hat and that no such thing is happening anymore.

PCB's actions have been hardly surprising 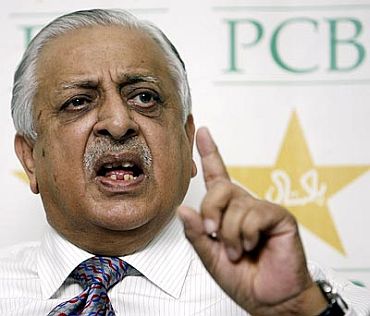 Clearly, denial, obfuscation and stone-walling have become something of a national malaise in Pakistan, and the Pakistan Cricket Board's refusal to act even against cricketers who have been serial offenders is hardly surprising.

In PCBs case, the problem also is that there are dark suggestions pointing to the complicity of the board's top officials in the entire match-fixing scandal.

But given that the PCB chief is a close relative of the country's defence minister and his sidekick who is the 'manager' of the team is the father-in-law of a Pakistan People's Party Senator who never tires of playing the ultra-patriotic card, they obviously feel that they cannot be touched.

As a result, a culture of impunity has developed in Pakistani cricket, with players confident that they can get away with anything, from doping to match-fixing. 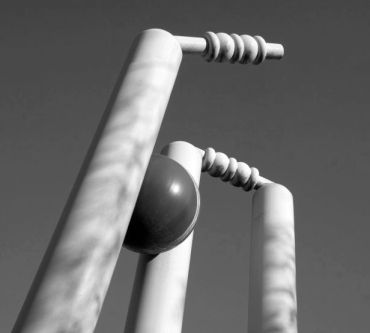 Not that this culture of impunity is anything new.

Allegations of match-fixing have been surrounding the Pakistani cricketers for decades but apart from the life-ban imposed on two cricketers, everyone else has got away scot free.

The irony is that many of the former Pakistani cricketers who have themselves been either accused or implicated in match-fixing in the past are today taking a very holier-than-thou stand on the entire spotgate scam.

Apart from a few notable exceptions -- Sarfraz Nawaz and Aamir Sohail, to name two -- who have been whistle-blowers and have consistently been calling for cleaning up Pakistani cricket, most of the other cricketers have been suspected of involvement with bookies.

The funniest sight was Javed Miandad talking about match fixing.

Considering his friendship and his family ties with the international terrorist and the kingpin of the cricketing betting mafia, Dawood Ibrahim, it was disingenuous of Miandad to comment on the episode, unless of course he was trying to settle scores with a rival betting mafia on behalf of his 'friend'. The tragedy of Pakistan, which has produced some fabulously talented cricketers, is that even when they formed a judicial commission to investigate match-fixing charges, the judge appointed to head the commission was a man who though a brilliant legal mind enjoyed the reputation of being one of the most corrupt and amoral judges in Pakistan's history.

Such is the rot in the system that it is unlikely if even the three A's that rule Pakistan -- Allah, Army and America -- can cleanse cricket in Pakistan.

Since the Americans don't know even the C of cricket, they are obviously not up to the task. Allah's soldiers in the cricket team -- the Tablighi mafia, including people like the former skipper, Inzamam-ul-Haq -- have also been tainted with charges of match-fixing, not to mention ball-tampering.

As for the generals, Pervez Musharraf did try and enforce some military discipline in Pakistani cricket when he appointed a general to head the PCB.

The 'criminal enterprise' will continue to flourish 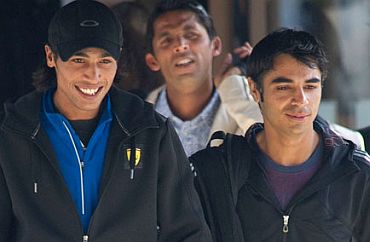 The result was predictable -- the general tried to manoeuvre the entry of his sons in the national team.

Like everything else in Pakistan, it appears unlikely if Pakistan will clean up its cricket without any outside intervention and pressure.

Left to the PCB and Pakistani authorities, the entire spotgate scam will be white-washed and it will be business as usual.
The problem is that the International Cricket Council, headed as it is by Sharad Pawar, who himself has been tainted by the entire IPL scam, is ill-equipped to take any meaningful action to clean up not only Pakistani cricket but also world cricket.

The bookies and match-fixers would therefore be betting that once all the brouhaha dies down, their 'criminal enterprise' will continue to flourish.