Raj and his MLAs pay tribute to martyrs 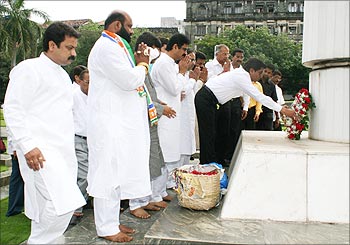 Chief of Maharashtra Navnirman Sena Raj Thackeray, along with the 13 party members who were elected to the Maharashtra legislative assembly, pays floral tribute at the Hutatma Chowk in Churchgate on Monday.

The Hutatma Chowk was built in memory of martyred members of Samyukta Maharashtra Samiti, a committee that played a key role in the formation of Maharashtra as a separate state.

Image: MNS Chief Raj Thackeray with the MLAs of his party at Hutatma Chowk on Monday.

My brand of politics will work, says Raj

All in the rat race for power