ISRO to launch Mars mission by 2015 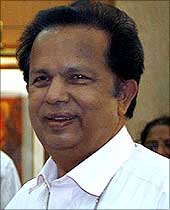 Unfazed by the abrupt end to India's maiden unmanned moon odyssey Chandrayaan-I, the Indian Space Research Organisation on Monday said it planned to launch the country's mission to Mars some time between 2013 and 2015.

"We have given a call for proposal to different scientific communities. Depending on the type of experiments they propose, we will be able to plan the mission," said G Madhavan Nair, chairman of ISRO.

"The mission is at a conceptual stage and will be taken up after Chandrayaan-2," he added. "Mars is very much in our agenda... It will be a challenge for us and we will chalk out a programme soon."

"You cannot plan a mission on Mars just like that. Only once in two years, we get the opportunity," said Nair, who is in Goa at the eighth international conference on low cost planetary missions.

Nair said the odyssey to the red planet would be cost-effective like Chandrayaan-I, which was pegged at $100 million (about Rs 500 crore) and was classified as one of the low cost missions. India is known for implementing cost-effective missions, he said.

The ISRO chief said the mission to Mars would be the most important Indian exploration as "it is a planet with atmosphere, lots of minerals and even preliminary indications of water presence".

ISRO has already begun preparation for sending a spacecraft to Mars. The Centre has sanctioned seed money of Rs 10 crore to carry out various studies on experiments to be conducted, on route of the mission and other details necessary to scale the new frontier. Nair had said recently that the mission studies had already been completed and that space scientists were trying to collect scientific proposals and scientific objectives.

Nair said Chandrayaan-I had fired the imagination of young scientists who have taken to space sciences and ISRO planned to tap this talent for its mission to Mars.

"A lot of young scientists are being brought into the mission, particularly from the Indian Institute of Space Technology, the Physical Research Laboratory, Tata Institute of Fundamental Research and other research laboratories," said K Radhakrishnan, director of Vikram Sarabhai Space Centre.

He added that the space agency would use its Geosynchronous Satellite Launch Vehicle to put the satellite in orbit and was considering using ion-thrusters, liquid engines or nuclear power to propel it further towards Mars.