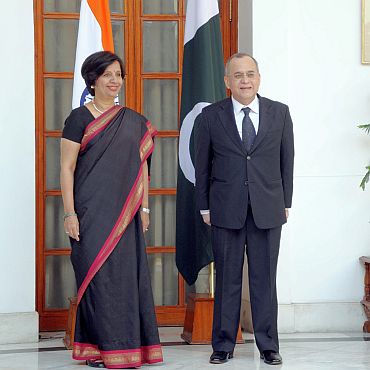 At the end of it, the much talked-about India-Pakistan talks turned out to be the case of the glass being half full.

The talks that began at 11 am on Thursday went on for some three hours, even spilling over onto lunch. Things seemed to go well and an impression was forming that after a hiatus of over a year, the India-Pakistan dialogue was taking off.

But then came the bolt from the blue -- the classic reality check.

He dealt a series of lethal blows with a belligerence rarely seen in conventional diplomacy.

One of the major reasons behind Bashir's raised pitch seems to be the inclusion of two serving Pakistan army officers -- Major Iqbal and Major Samir Ali -- in one of the three dossiers that India handed over to Pakistan on Thursday. India wants to prosecute the duo for their involvement in the Mumbai attacks. New Delhi also asked Islamabad to hand over 33 other terrorists.

Now, it is quite clear that the real 'talk' Pakistan wanted to have with India was done by Bashir at his press conference at the Pakistan embassy.

In the full media glare, Bashir told India: "Do not lecture us." He ticked off the Indian Army chief. He repeatedly seemed to single out Prime Minister Manmohan Singh as the only man with a "vision" in the Indian government.

He also said that Pakistan was not desperate for talks. He harped on Kashmir being the "core issue". He pressed the demand for concluding "do-able" things like an agreement on the Siachen Glacier and Sir Creek. He demanded that India prune its defence purchases and curb its missile development.

In his outburst, Bashir did not make one conciliatory gesture to India's persistent demand to tackle the terrorist infrastructure based on Pakistani soil.

No matter what he said or didn't say, the main thing was his tone and his body language. He spoke as if he was programmed before he left Islamabad and the talks, as such, were a sideshow.

The Indian side has agreed that they were a "bit surprised" by the Pakistan foreign secretary's press conference.

However, an experienced retired diplomat, who has served in Pakistan, told rediff.com that the biggest mistake Indian side made was why the post-talk events were kept open-ended when New Delhi knows Pakistani bureaucrats and politicians so well.

India has not learnt its lessons from the 2001 Agra summit where then Pakistan president Pervez Musharraf took maximum advantage of the media attention.

If a joint press conference had been arranged with a controlled crowd and limited questions, Bashir would not have got such a free hand to carry on for 90 minutes on what all Pakistan wants from India.

Many Pakistan experts are trying to assess why Bashir almost blasted India's idea of arresting and punishing Lashkar-e-Tayiba co-founder Mohammad Saeed [Images]. Was Pakistan's aggressive stance at the press conference pre-planned or was it triggered by India's insistence on the issue of terrorism for 85 per cent of the duration of Thursday's talks?

A top-ranking Indian diplomat said Bashir was expected to say a few harsh things directed at the audience back home in Pakistan, but they never expected a diplomat to speak in the language of a politician.

"(Indian Foreign Secretary) Nirupama Rao is not trained like that," the diplomat said. "She could not have matched Bashir's performance. She never had that mandate."

Another diplomat well versed with such talks, said: "Our (Indian) style is different. We talk differently."

Three major reasons have been cited for Pakistan's hard talk in New Delhi. One, Pakistan knows that the United States and Britain are on its side while India looks alienated in Afghanistan. Pakistan is on a strong wicket in the world of geo-political realities. Islamabad is bullish about its position and its agenda in the region.

Second, during the talks, the Pakistan side noticed that India refused to move forward on the issue of composite dialogue; rather, the Indian side had its way in dominating the dialogue by talking about terrorism and little else.

Lastly, Bashir surely is reflecting the domestic power tussle in Pakistan between the civilian forces and the military.

Another reason that may have added to Pakistan's rough stance is the three dossiers given to Bashir's team.

A senior ambassador, who writes frequently on Pakistan, says: "It is possible that the leaks given to the media about the three dossiers were a well-calculated move to malign Pakistan by a section in the government who, in the first place, never supported the talks."

The dossiers even quotes a serving Pakistan army officer without mentioning his real name. This inclusion surely touches a raw nerve in the Pakistani military establishment.

Bashir may have felt his one-upmanship over his Indian counterpart won the day, but it may turn out to be a Pyrrhic victory.

His hard talk turned into a failure for all those on both sides of the Wagah border who were holding their breath with cautious expectation that there could be stirrings of change in the air.

Till Bashir tore into Indian policies at around 5.40 pm, it did seem as if a lot had been achieved and the prophets of doom were way off the mark in their prognosis.

Restrained, gracious and focused, Rao avoided the minefield and handled her press conference in a constructive spirit.

When the Indian and Pakistan delegations -- in all, some 25 diplomats and bureaucrats from both sides -- spoke at the oval shaped table at Hyderabad House in New Delhi, negative vibes were absent, the Indian side said after the meeting.

The atmosphere was relaxed and cordial; even the rhetoric remained under control.

Pakistan spoke about Kashmir and the water issue to which India responded with the well-known national position. When Pakistan raised the issue of India's involvement in Baluchistan, India said it was baseless, and India does not have any desire to destabilise Pakistan.

Till the Pakistani foreign secretary spoke out, one felt the baby step India had taken had opened the window for further progress. The Indian side had a tough task to handle the talks because the Opposition parties were against it.

Many domestic critics had voiced their concerns over inviting Pakistan for talks without New Delhi having enough manoeuvring space in the geo-politics of the region in view of Pakistan graduating as a key ally in the US's regional strategy in Afghanistan and Central Asia.

His statements could have been taken in their stride or could have been underplayed, but the wounds of the Mumbai attacks are still sore. A source in the Indian government told the media that while Rao had got her brief for the talks from a democratic government, her Pakistani counterpart had got the same from "GHQ (the Pakistan army's General Headquarters) and men in khaki."

If Pakistan scoring points was wrong, then India's attempt to counter-score was meaningless. Even before the talks, one knew who calls the shots in Islamabad and who briefs whom in Pakistan.

The big question is how the US will take stock of Thursday's diplomatic debris. After all, senior US officials have repeatedly harped on the great importance of the talks. By now, it is clear that it takes two to tango.

India hands over 3 terror dossiers with 34 names to Pak