News
Business
Movies
Sports
Cricket
Get Ahead
Money Tips
Shopping
Sign in  |  Create a Rediffmail account
Rediff.com  » News » 'Changes within Pak are not visible from India' 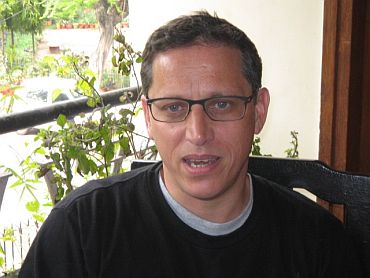 Why India should talk to Pakistan? Why is Pakistan unable to act against perpetrators of terror in Mumbai? What is the role of US and the UK in the bilateral issue? These and many such questions are addressed by Adrian Levy, distinguished British journalist and co-author of Deception: Pakistan, the United States, and the Secret Trade in Nuclear Weapons, in an exclusive two-part interview with rediff.com's Sheela Bhatt.

Levy was foreign correspondent for the London-based Sunday Times for seven years before joining the Guardian as senior correspondent.

He has co-authored The Amber Room: The Fate of the World's Greatest Lost Treasure, and The Stone of Heaven: Unearthing the Secret History of Imperial Green Jade.

Currently, Levy and his co-author Catharine Scott-Clarke are currently travelling in India and Pakistan with an aim to pen two books -- one on Kashmir insurgency of the 90s and another on the ongoing changes within the Pakistani intelligence setup.

How do you look at the India-Pakistan talks?

I think it is significant. Some people are undermining it, like the ignominious Hafez Saeed, and some loudmouths from both side. It is significant as long as they talk. While some people say that there is nothing to be gained from talking, I think, the opposite is true.

They argue that talking is a sign of weakness by India in view of what happened in Mumbai. I would argue that talking at this point is significant not for its goals but for the process itself, which needs to be started again. I am saying this for a specific reason.

There are fundamental changes slowly happening within Pakistan. That is not necessarily visible from India. These changes need encouragement. They need talks. They need even viewing. It's impossible to see them from here. The coverage that I see is limited to the military intelligence establishment, increased insurgency in Kashmir or the coverage of linkages of the attacks in Pune or Mumbai but, not much on changes in civil society.

It is difficult to see from here what is happening in Pakistan society. There is a military intelligence grouping, but there is also a civilian grouping that includes parliamentarians and civil services and civil police. The Federal Investigation Agency (of Pakistan) is transforming into a homeland security-type organisation.

Now, there is an intelligence mechanism to understand what is happening within. There is an attempt to rein in thousands of jihadis in Punjab and in troubled areas, who were given freedom by the military. Putting this genie back in the bottle is proving incredibly difficult.

Many in Pakistan see Pakistan on the verge of a civil war. Punjabi jihadis, Afghan militia, Lashkar-e-Tayiba, Lashkar-e-Jhangvi, etc are all armed. They are directed against the Pakistani State. It can explode. Pakistan is trying to restore security while controlling these bloodthirsty groups. These things are not visible from India. What is visible is terrorism committed by the Pakistani elements in India.

You mean to say that new Federal Investigation Agency does not have anti-India trait of the Inter-Services Intelligence?

I cannot vouch for individual philosophies of the people, but it is very clear that the FIA is looking inward. It is not looking east while tackling terrorism. Its goal is to look within. They are going about it professionally. It is heavily influenced by what other Islamic states have done.

Indonesia and Malaysia have dealt with religious extremists differently. Pakistan is studying how Indonesia dealt with fundamentalism; how they dissipated the anger of young people. More than anything else, Pakistan's FIA has begun to understand how terrorism works. This is far more sophisticated than the American or British understanding. They now have diagrams, maps, money trails, explosives, arms; they have listed thousands of names in their books.

They now know who are giving the ideas. It is the melting pot terrorism. Waziristan people are their foot soldiers. They are brought into suicide terrorism like lambs taken to slaughterhouse. Punjabi groups operate at the top level. The Al Qaeda elements are financing it. It is amazingly structured enterprise. They want to destabilise India and Pakistan. Not just Kashmir but whole of India. Their target is also Europe and Australia.

How do you see the pressure of the US and UK on India? Also, the question is asked why should India carry on with their agenda?

First of all, it is correct that the British desire is that India should talk to Pakistan. It is not a secret. Urgency behind that is the general sense to bring down tensions in the region.

Also, there is a desire to resolve some of the enormous problems faced by both sides, which has endangered stability. The risk is the waves of attacks that can come out of the crucible of jihad.

Yes, Britain is interested in Indo-Pak talks. Its interest is partly selfish. The European stability is dependent on India-Pakistan stability. Europe is reaping the products of post-9/11 foreign policy decisions. Its affecting India, too.

Europe's concern is more about Afghan Taliban while India is concerned about Pakistan based anti-India jihadis. Why should India not look at its own interest in taking a tough stand?

There is a view emerging that we are on the way out from Afghanistan. We are finding the graduated policy to exit -- leaving behind the security apparatus -- weak. This India-Pakistan talk is inevitably part of the global picture of the way in which UK and US perceive the long-term future of Afghanistan.

Undoubtedly, what we see in the background of all this is that the future of Afghanistan will have some kind of government of national reconciliation, which will have some kind of Taliban elements. Who knows, there could be a part of Haqqani network in it! It may have anti-India or pro-India elements. But, it will have all kinds of vested interest unlike the Karzai government that represents only American interests at the moment.

So, the British pressure for India to talk is basically to shore up the British plan of Afghanistan. I think, the policy of not talking gives more space to Hafeez Saeed-type of elements who already have substantial space.

India aware of 'trust deficit', in talks with 'open mind'

'We need to avert terror attacks and buy time'