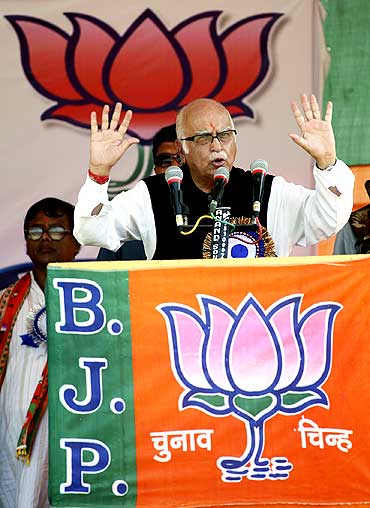 The Bharatiya Janata Party welcomed the Supreme Court decision dismissing a plea seeking deferment of the verdict in the Ayodhya title suits, saying it had always maintained that there should be no legal delay in the case.

"We certainly welcome the Supreme Court decision. The party has already stated its position that it does not desire any legal delay and this verdict of the apex court has cleared the way for the verdict to be pronounced by the High Court," BJP spokesperson Nirmala Sitharaman said.

A three-judge SC bench headed by Chief Justice of India S H Kapadia today dismissed the plea seeking deferment of the verdict on Ramjanamabhoomi-Babri Masjid title suits by the Allahabad High Court. It gave its green signal to the High Court to go ahead with the judgement.

The BJP had held a meeting of its top brass last week and made a public statement that judicial delays of the last 61 years had prevented construction of a Ram temple at Ayodhya.

It had also expressed the hope that there would be no further legal delay in the case.

Congress appeals for peace after verdict 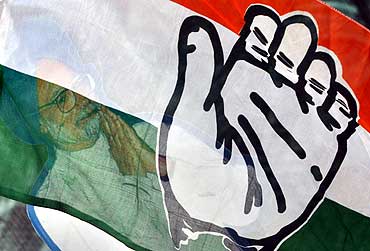 The Congress also welcomed the Supreme Court order paving the way for the Allahabad High Court to deliver its judgement in the 60-year-old Ramjanambhoomi-Babri Masjid title suit.

"We welcome the order. The party has always held that the issue should either be resolved through mutual talks or the court order should be obeyed," party general secretary Janaradhan Dwivedi told reporters when asked about the the apex court dismissing the plea for deferment of the verdict by the high court.

When asked about the statement of BJP leader Vinay Katiyar that the high court judgement could be challenged in the Supreme Court or the matter could go to Parliament, Dwivedi said, "they (the BJP leaders) know what they are saying, but there is a consensus in the country that the court verdict should be respected. It is natural that anyone can go to the Supreme Court".

To apprehensions about law and order situation in the wake of the high court judgement, he said, "It is our duty as citizens of the country that we maintain peace and goodwill." 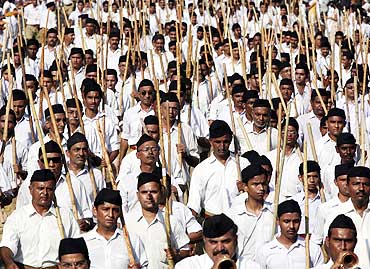 The Rashtriya Swayamsevak Sangh said the Supreme Court has done the "right thing" by dismissing a petition seeking deferment of the Allahabad High Court judgement on the Ramjanmabhoomi-Babri Masjid title suit.

"Whatever the Supreme Court has said is the right thing. A deliberate attempt was made to derail the judicial process by approaching the Supreme Court," RSS leader Ram Madhav told reporters in New Delhi. He said the petitioner had no locus standi in the title suit and the apex court had done the "right thing" by dismissing the plea.

A Supreme Court bench headed by Chief Justice of India S H Kapadia dismissed a petition filed by Ram Chandra Tripathi seeking deferment of the Allahabad High Court judgement on the title suit contending that attempts should be made for an out-of-court settlement of the issue.

"It (petition) deserves dismissal. Now that the petition is dismissed, the whole country is looking forward to the high court verdict," Madhav said. The High Court verdict would be "one step forward in this legal process", he said adding "rest of the things will be deliberated upon afterwards."

The AIMPLB hopes for a speedy verdict 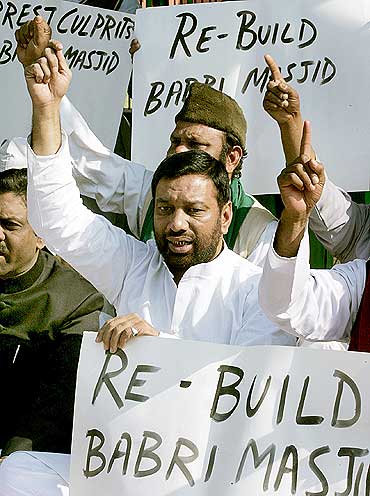 Lawyers representing the plaintiffs in the Ayodhya title suit today welcomed the Supreme Court's dismissal of a plea for deferment of the verdict even as the counsel for the petitioner said the apex court could have indicated reasons for the order.

The All-India Muslim Personal law Board also welcomed the SC order. "Now we are hopeful that the Lucknow Bench of Allahabad High Court will be able to deliver the judgement by October 1," member and legal convenor of the AIMPLB, Zafaryab Jilani said. "So many Prime Ministers, Shankaracharyas and even former President R Venkataraman tried and failed...then suddenly a gentleman Mr Tripathi comes...that was a little strange," he said.

"It is not in our favour only but in favour of all the contestant parties. Mukul Rohatgi, representing the petitioner, retired bureaucrat Ramesh Chandra Tripathi, said "what are the reasons (for the dismissal) are not indicated in the order and neither will be known in the future". He further said that the Centre's stand did not make any sense. "They are only saying we want an amicable resolution but will not do anything. It is neither rational nor logical". "The Centre took no stand," he said.

"It is assuring indeed. The country wants the judgement to be delivered. We need to trust the innate maturity of the people of the country. I have said earlier that there was some motivation behind the filing of this application. The argument of consequences of a judgement is dangerous," Ravi Shankar Prasad, counsel for Hindu Mahasabha, said after the SC order.

Ranjana Agnihotri, counsel for one of the plaintiffs in the title suit, Jagatguru Shankaracharya Swaroopanand Saraswati, said, "now we will wait for the judgement".

Former Solicitor General of India Harish Salve said, "it was an unprecedented application. The government stood up and said that it had no problem in delivering the judgement". "I am sure India are mature enough. I am deeply satisfied," he said.

Senior lawyer Pinki Anand said "doors for a reconciliation was not closed" though Allahabad High Court is set to deliver the verdict on the title suit.
© Copyright 2022 PTI. All rights reserved. Republication or redistribution of PTI content, including by framing or similar means, is expressly prohibited without the prior written consent.