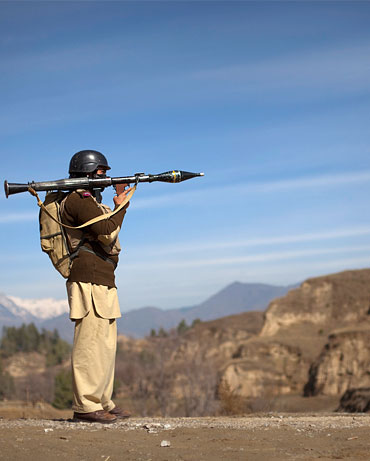 United States Senator Carl Levin, chairman of the powerful Senate Armed Services Committee, told Rediff.com that he appreciated India's concerns over the massive American military largesse for Pakistan, considering the reports that such aid has often been diverted for a potential military confrontation with India.

The investigative watchdog of the US Congress, the Government Accountability Office, which was commissioned to report on the US military aid provided to Pakistan over the past few years, had reported that much of it had been diverted to beef up Pakistan's military for a potential conflict with India.

'We take these reports seriously' 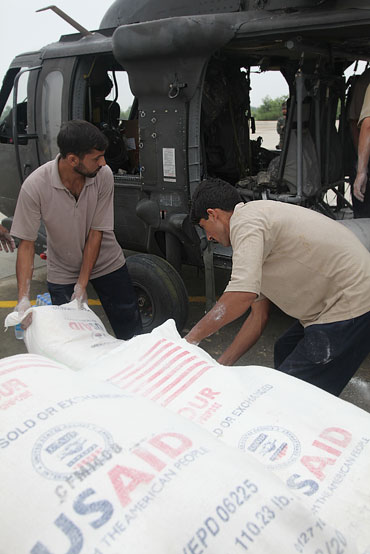 Image: Food supplies for Pakistani flood victims are loaded onto a US BlackHawk helicopter
Photographs: Ho New/Reuters
>US Senator Robert Menendez, who commissioned the report, had disclosed the findings in private and public meetings of the Senate Foreign Relations Committee of which he was a member. Levin said he was familiar with the findings.

In an interaction following his speech at the Council on Foreign Relations on 'The Way Forward in Afghanistan,' Levin said these reports were closely monitored.

"We take those reports seriously and we raise them with the Pakistanis, and that we try to prevent any diversion of that support. That's what we do," he said.

The Senator from Michigan added that the Senate Armed Services Committee would "continue to closely monitor" this aid and try to ensure that it "is used for the specific purpose (countering terrorism) for which it is provided."

'Pakistan diverting US aid against India' 'We feel that even though the US is giving arms to Pakistan to fight terrorism, our practical experience is it is always being misused,' Antony had said. 'They are diverting a portion of aid against India,' he added.

Levin has always expressed scepticism over the billions of dollars poured into Pakistan to push Islamabad to act more aggressively against the Taliban and Al Qaeda forces in the Federally Administered Tribal Areas in Pakistan's Northwestern Frontier Province.

When the Kerry-Lugar bill to provide $7.5 billion (about Rs 35,250 crore/Rs 352.50 billion) to Pakistan over five years -- supported by US President Barack Obama -- was being debated last year, Levin had said, 'We've got ambivalent evidence as to whether or not they (Pakistan) are committed to that goal (of aggressively fighting the Afghan Taliban).'

He believed Islamabad is going after the Pakistani Taliban -- which is a threat to it -- instead of the Afghan Taliban.

Pakistan, Levin felt, continued to sponsor and support the latter through its spy agency, the Inter-Services Intelligence, to have a hold on Afghanistan and for strategic depth against India.

Even US Defence Secretary Robert Gates has acknowledged this, calling it Islamabad's back-up plan. 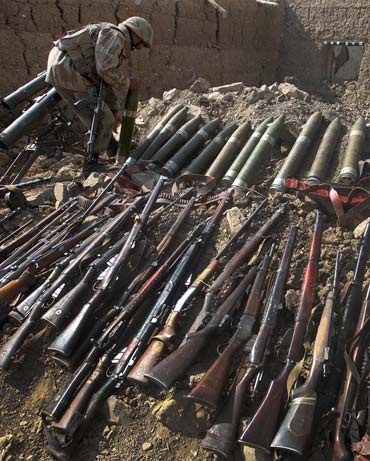 Image: A Pakistan soldier with weapons and ammunition recovered during operations against the Taliban
Photographs: Faisal Mahmood/Reuters
"In Pakistan, which is inextricably linked to Afghanistan, officials have taken some steps to rein in extremist groups that threaten stability in Pakistan, but they have failed to take the steps needed to address major threats to Afghanistan from within Pakistan," Senator Levin said.

Asked if he brings up these issues during his visits to Islamabad and his meetings with Pakistan President Asif Ali Zardari and General Ashfaq Kayani, the Pakistani army chief, Levin said, "Their reaction always is that they are over-extended; that they are going after everybody, but that they are not doing it all at once. But we've heard that for a long time and that's the problem."

Can the US see through Pakistan's games? 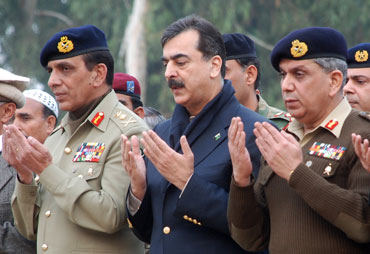 Image: Pakistan PM Yusuf Raza Gilani (centre), General Ashfaq Kiyani (left) and General Tariq Majeed
Photographs: Reuters
Senator Levin had said he was not surprised that Pakistan had said it had no plans to conduct any new offensive, particularly in North Waziristan.

He had dismissed the Pakistani leaders's claims to visiting US lawmakers that 'they put a squeeze in North Waziristan,' saying, "That doesn't mean anything specific is going to happen inside North Waziristan. When they say squeeze, what they mean is that they are squeezing South Waziristan and some of those folks are going into North Waziristan."

"That's what they call squeezing," he added. "Pushing people into North Waziristan is not my definition of squeezing."

Asked if the Obama administration was taking India seriously as a player in resolving the imbroglio in war-ravaged Afghanistan, the Senator said, "India is being taken seriously. The fact that the President is visiting India next month will prove that."

"I would say their (New Delhi's) policies have an effect on Afghanistan," Levin said, adding that Obama would speak of India's role 'in terms of their impact and policies' during his visit, which is scheduled to begin November 7.