For Pak, India a bigger threat than Taliban, Qaeda 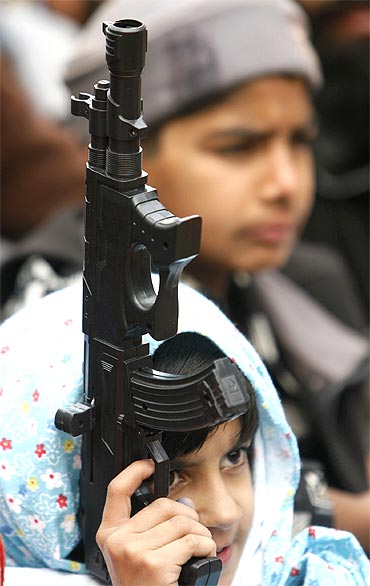 Image: A supporter of the Jamaat-e-Islami holds a toy gun at an anti-India rally
Photographs: Mohsin Raza/Reuters

Though terror groups continue to strike in their country, a majority of Pakistanis still consider India as a major threat, view America as an enemy and are far less concerned about the Taliban and the Al Qaeda.

While Pakistanis express serious concerns about the United States, they are more worried about neighbour and longtime rival India than extremist groups within Pakistan, according to the prestigious Pew Research Centre opinion poll carried out inside Pakistan. 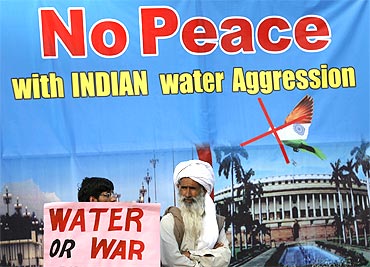 However, despite the deep-seated tensions between India and Pakistan, most Pakistanis want better ties with India.

Roughly 72 per cent said it is important for relations with India to improve and about 75 per cent support increased trade with India and further talks between the two rivals.

In spite of pumping in billions of dollars in economic and military aid, the United States' image in Pakistan was at its lowest ever among the 22 nations included in the poll. Fifty-nine per cent of the respondents described America as an enemy and only eight per cent trusted President Barack Obama.

Pakistanis not bothered about Al Qaeda Image: Residents carry the draped body of a suicide bomb victim to his grave in Pabbi, Peshawar
Photographs: Fayaz Aziz/Reuters

Pakistanis perceived little threat from the Taliban and the Al Qaeda and only 25 per cent of the people said it would be bad for Islamabad if Taliban takes over Afghanistan again.

While 18 per cent said it would be good for Pakistan, 57 per cent were not concerned.

State Department spokesman P J Crowley conceded that there is a huge trust deficit between the US and Pakistan.

"We understand that there's a deficit in trust in our relationship. There are those in Pakistan who recall and sense that they were abandoned by the US and the international community, going back 20 years or more," he said.

'US is committed to the future of Pakistan' 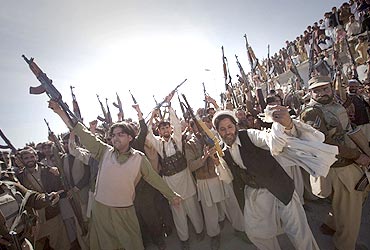 Crowley said the US has worked hard in recent months to try to turn this relationship around.

"I think we recognise that this was not going to occur overnight. We have tried to communicate forcefully to not only the government, but also to the people directly, that the US is committed to the future of Pakistan," he said.

"We are, in fact, a partner. I think we're not surprised that people want to see fruits of this partnership; that's exactly what we're trying to do. It goes back to what the (Secretary of State Hillary Clinton) announced in Islamabad last week -- concrete projects that -- on energy, on health, on education -- that will create tangible results so the people of Pakistan can see it. And when they see it, then we would expect to see those poll numbers prospectively improve," he said.