Sign in  |  Create a Rediffmail account
Rediff.com  » News » 'The next battle will be before the Supreme Court' 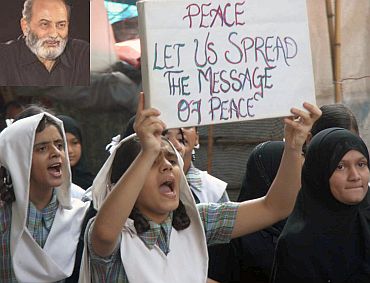 Now that the Allahabad high court has delivered the Ayodhya verdict, all eyes will now focus on the next round of battle in the Supreme Court.

For Zafaryab Jilani, the chief counsel for the Sunni Central Waqf Board, Thursday was a disappointing day. The verdict was not the way Jilani expected it to be. But he says the community has not lost hope; they expect justice from the Supreme Court.

In an interview with rediff.com's Vicky Nanjappa, Jilani, who has been battling this case for nearly two decades, says that all hope is not lost.

"The matter is to be settled now by the Supreme Court. We cannot accept the sharing formula, which has been ordered/suggested by the Lucknow bench of the Allahabad high court," he says.

'The verdict has not gone the way we expected' 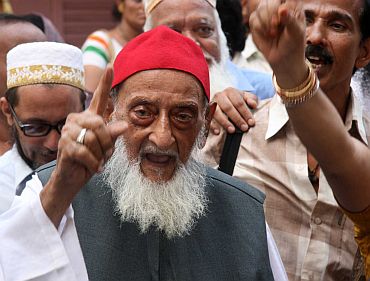 Are you very disappointed with the verdict?

Yes, I am partly disappointed with this verdict. It has not gone the way we expected it to. The verdict has gone against the settled principles of law and also the evidence put forward by the Muslims in this case.

So have you decided what to do next?

We have appealed to everyone to maintain calm and have been telling them that there is still an option of approaching the Supreme Court, which will finally decide on this case. I am still going through the judgment. Once that is done, we will file an appeal.

Moreover there is no hurry to rush up to the Supreme Court and seek a stay on the judgment, as the high court has ordered a status quo.

Do you today regret rejecting the last-ditch attempt to settle the matter out-of-court? Do you feel that it would have been a better option considering how this verdict has gone?

Not at all! I do not regret that one bit.

The judicial process had to go on and I am happy that it has moved on.

'Hopefully the SC will lay down the correct position of law' 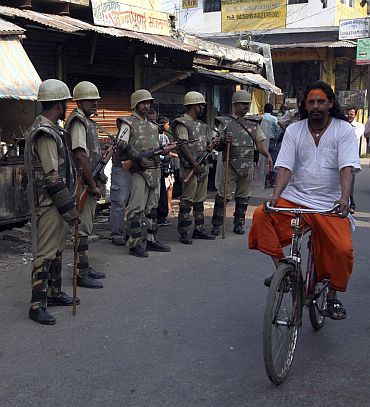 There was a time when it was getting extremely difficult to move forward in this case. A lot of times it has gone slow and at times we wondered whether the verdict would ever come out.

There was a need to get past this stage and today we find the case moving forward. The ground rules have been laid and the next battle will be before the Supreme Court.

As I said earlier we will go to the Supreme Court, which, I am hopeful, will lay down the correct position of law.

Have you fixed any time frame to move the Supreme Court?

That would be difficult to say at the moment. There is a lot to prepare and only once we are thorough will we go ahead and move the Supreme Court.

'We cannot be told to surrender the mosque' 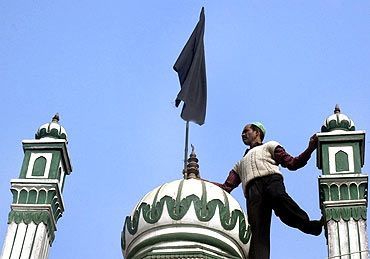 We are also in discussions regarding our next course of action on this issue. We have decided to meet next week following which we will take a decision.

As I said we don't want to hurry anything up.

The high court speaks of a land sharing formula in terms of one-third for three parties. Do you see any chance of truce between the two communities on this issue?

No, I do not see any chance since it is not a workable solution. If it was, it would have been done long back. One party had to win and the other had to lose. We always wanted finality on this issue.

'We are not completely happy with various aspects' 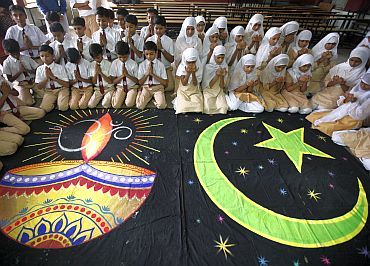 This issue had come up before the All India Muslim Personal Law Board earlier and it was rejected. The entire case for us is about not giving up the mosque. Moreover, it is not permissible under the shariyat (body of doctrines).

Some people from your community have said that it is a panchayat-styled judgment. Do you share the same view?

I do not like to use such words, as it would show disrespect to the judiciary. The judgment has made an attempt to keep all parties happy. But every verdict has to come to a final decision and in this one we are not completely happy with various aspects and hence have decided to challenge it.

The verdict seems to have been decided largely on the basis of faith? What are your comments?

Yes, there are a lot of inferences to that aspect and it was argued by some earlier that courts cannot decide on the issues of faith. However, the courts have made it clear it can take up issues relating to faith and we have to accept that fact.