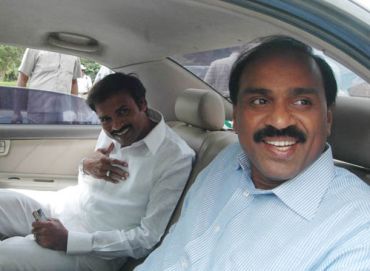 Investigating the multi-crore illegal mining scam in Karnataka will not be an easy task for any investigative agency. Amidst the political blame game over the issue, people are still in the dark about who is responsible for the scam.

The various documents, which have been trickling in since the past couple of days, when read along with the probe report by the Lokayukta Justice N Santosh Hegde, reveal a larger modus operandi.

Karnataka Advocate General Ashok Harnahalli, in an interview with rediff.com on Tuesday, had pointed out that raising contracts are the biggest hindrance to this probe and that there is a need to ban it immediately.

Documents reveal that out of the 80 odd mining leases in the Bellary region, at least 45 are raising contracts.

Raising contract is an agreement between a mine owner and a third party. Once a person is issued a mining contract he is approached by a third person, who in turn offers to carry out the mining activity on his behalf. ...

In Bellary, illegal is legal 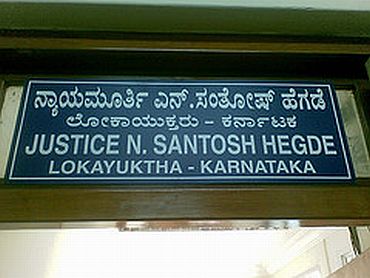 Image: The office of the Lokayukta

Though the title 'Mineral Raising Contract Agreement' is termed illegal in the mineral rulebook, it has become an unwritten rule in the multi-billion dollar worth Bellary iron ore mining business.

The irony, however, is that the raising contractor manages to get a major share of the profit, which amounts to even 80 per cent, whereas the actual owner is left with the remaining amount.

Lokayukta Justice N Santhosh Hegde says this is an unwritten rule mainly in the Bellary area. The rulebook clearly mentions that raising contracts are violative of Rule 37, 37A and 46 of the Mineral Concession Rules and contrary to the covenant of clause 17 and 18 of Part VII of the Mining Lease deed.

The statements that have been obtained from some of the mine owners, which are part of the ongoing investigation into illegal mining, reveal that third parties or the mining lords force them to enter into such a contract. 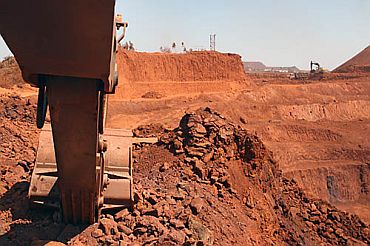 Image: Mining in progress in Bellary

Justice Hegde says the living conditions in Bellary are extreme, thanks to the weather. Most of them don't want to live over there and cannot operate the mines. Hence, they part with their leases.

Officials say that even though this is illegal, it is very difficult to proceed against them, as there is no documentation.

The Lokayukta report states that there are nearly 40 such contracts. There is an interesting annexure to this report by Dr U V Singh, a senior forest officer. In the annexure, he mentions that the Obulapuram Mining Company, which is owned by the Reddy brothers, Janardhan Reddy and Karunakar Reddy, has allegedly encroached on land belonging to Karnataka.

The annexure says OMC has allegedly entered into an agreement with Hind Traders through a raising contract and in the bargain has altered the border.

When one calculates the amount that is being mined from the 45 mines (1.80 lakh tonnes per day), which are handled by raising contractors, it shows that they earn Rs 39 crore per day.

After exclusion of duty, taxes and other expenditure, the raising contractor is left with Rs 17 crore per day as profit, of which he parts with 20 per cent to the mine owner. While this is what they earn legally, there is also the added money that is being earned through illegal mining, which preliminary reports suggest could be twice the amount.

'Nobody will go scot-free' 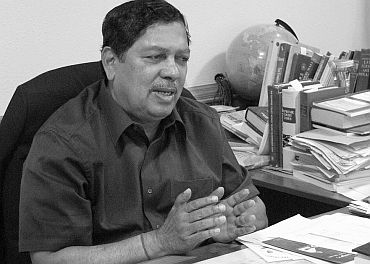 The money earned from illegal mining goes directly into their pockets and there is only the cost of labour and transport that they have to shell out.

It may seem like an impossible situation to investigate. The Reddy brothers have openly challenged both the Congress and the governor to show that they own even an inch of mining land in Karnataka.

Justice Hegde, however, says it is not an impossible situation. "Maybe there are no documents to show that people have entered into a raising contract. The start of such a probe may be difficult, but then we have the power to interrogate," he said.

"We are aware that almost 90 per cent are raising contracts in the Bellary area and we are getting to the bottom of it. We have seized several fake permits and we have to put two and two together and join the dots. Under no circumstance will anyone get away scot-free," he added.

"I have also been watching the developments over the past few days, where all the parties are making allegations against each other on this issue. This is a good sign and we will call for documents from each one of them and will use it as a lead to the investigation," Justice Hegde pointed out.