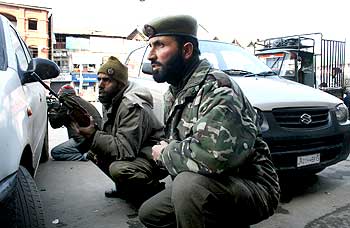 Terrorists on Wednesday struck at the heart of Srinagar killing a policeman and injuring seven others after taking hostage number of people in a run-down hotel breaking almost two years of lull of militant violence in the city.

Militants struck Lal Chowk, the nerve centre of the city, at around 2.15 pm by exploding grenades and opening indiscriminate firing, triggering panic among the people.

In the firing and lobbying of grenades by the militants, police constable Mohammed Yusuf, who was driver of Station House Officer of Maisuma, was killed while nine others including a camera person of a New Delhi-based private TV news channel were injured, they said. The two fidayeens attacked the CRPF camp with grenades and gunfire and subsequently forced their enrty into a nearby hotel identified as 'Punjab Hotel' building.

The state police had a difficult time in evacuating the injured persons and the civilians in the highly congested commercial centre, which is filled by thousands of people all day.

People thronging the business hub ran for cover and those who got trapped had to be evacuated by the police.

A policeman dies on the spot 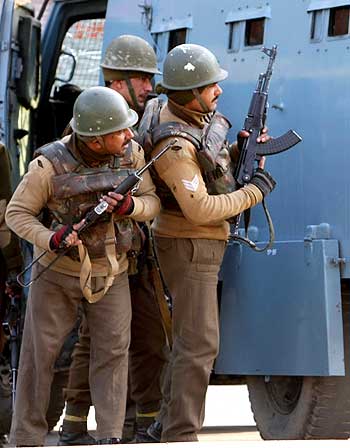 The entire Lal Chowk area soon got emptied as heavy firing exchanges between the holed up militants and surrounding security forces continued.

A senior police officer said that one policeman died on the spot and eight civilians and a CRPF trooper were injured in the initial attack by the militants.

The injured were evacuated in whatever mode of transport available at the spot by the locals as well by the police.

Jammu and Kashmir Inspector General of Police Farooq Ahmad was the first to reach the spot and oversaw the evacuation of the people in the area. 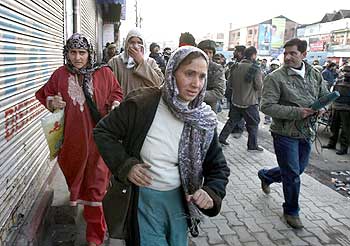 Intermittent firing was continuing late into the night in the area and security forces are considering various options on how to neutralize the holed up militants with least collateral damage.

Farooq said that 'security forces were preparing for the final assault on the hotel building to take out the militants.'

As darkness enveloped the city centre, the security forces were moving in more reinforcements and closer to the hotel building to tighten up the siege.

'Mujahideens are still living in Kashmir' 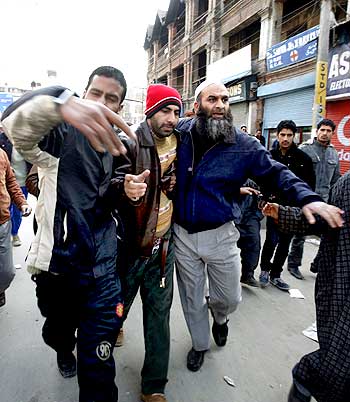 Jamiat-ul-Mujahideen, a radical outfit, claimed responsibility for the terror attack in Lal Chowk in Srinagar, saying the strike was intended to convey the message that militancy was not yet over in Kashmir.

Threatening further attacks, the pro-Pakistan militant outfit said today's assault was carried out to show that 'Mujahideens are still living in the hearts of Kashmiris.'

The attack was also aimed at derailing the 'so-called political process' in the state, said Jaleel Ahmed, an JuM spokesman, in a faxed statement to PTI.

"The attack will continue on Indian forces and vital installations," he said.

'It's the handiwork of LeT only' 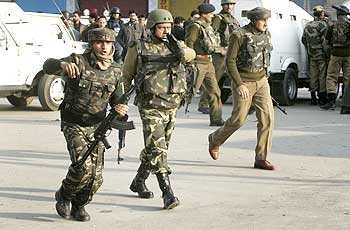 However, the police said it was the handiwork of Lashkar-e-Tayiba terrorists only. Director general of state police Kuldeep Khoda told PTI that the police had foiled a possible suicide-attack by the LeT militants. The last major terror attack in the city took place on October 11, 2007 at Dalgate area.

Meanwhile, police fired a few tear gas shells to chase away a crowd at nearby Abi Guzar locality. The police resorted to teargas shelling after the crowd started raising slogans in support of militants, sources said.

They said a mob also resorted to stone-pelting at Maisuma prompting the police to fire tear gas and use batons to restore law and order. 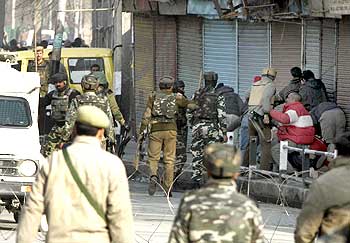 Among those evacuated was the editor of Urdu daily 'Srinagar News', Mehrajuddin, who said the militants first lobbed a grenade on a CRPF bunker located at the now defunct Palladium Cinema in Lal Chowk.

"I and my staff were in the office located in one of the buildings adjacent to Punjab Hotel where the militants are believed to be held up, when we heard a deafening sound of a grenade blast followed by retaliatory fire opened by the CRPF which shattered the window panes of the commercial buildings in the area," Mehrajuddin told PTI after being evacuated by the police.

The scribe said he and his reporter Gulzar Ahmad had a narrow escape as some bullets landed in their office. "We lay down on the ground to save ourselves from the firing. We heaved a sigh of relief when police knocked on the door of the office and rescued us from the building," he said. 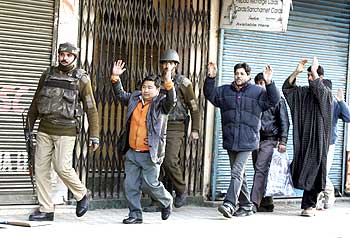 Ghulam Mohammad Beg (64), who was also evacuated from a shop in the area, said he managed to enter it as soon as the grenade blast took place.

"There were already 15 people who had taken shelter in the shop. One of them was hit on his arm. We remained in the shop for over two hours till the police came and allowed us to go," he said.

Naseema from old city said she was shopping in the area when she got held up. "I do not know what happened as we remained inside the shop till police came and rescued us," she said.