For Tufail Mattoo's family, the agony will never end 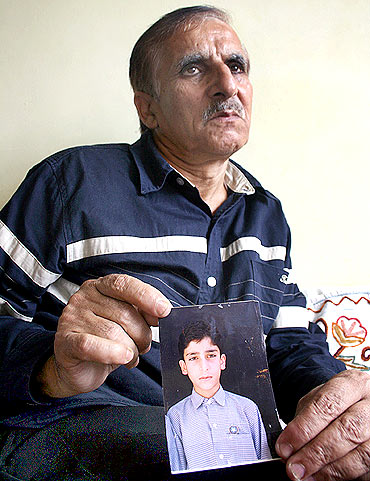 Krishnakumar Padmanabhan meets Mohammed Ashraf Mattoo, father of the 17-year-old Tufail whose killing on June 11 in Srinagar set off a vicious cycle of violence

On June 11, Tufail was returning home from tuitions when he ran into a Jammu and Kashmir police team, which had just dispersed a bunch of stone-throwing youngsters.

Witnesses in the locality said the police started chasing Tufail when they saw him. As he began to run, the police fired a teargas shell at him from close range. The shell hit him in the head, killing him instantly.

"We had always told him to avoid trouble. We had even asked him to take the inside lanes and bylanes where there won't be trouble. That day he did everything right, and yet ended up being killed," recalled his father Mohammed Ashraf Mattoo.

Even as the family lost its only child in mindless violence, little did they realise that their nightmare had just begun.

As the family began searching for Tufail after he did not return home by 7 pm, word spread that his body was lying in the morgue.

"The whole neighbourhood knew of his death before us. They sent a policeman in plainclothes to break the news to us. When I stepped out of the house in the night, the whole neighbourhood had descended on our street. But there was pin-drop silence. Nobody knew how to tell me," Mattoo said.

The policeman who was entrusted with the responsibility merely mumbled the matter to a relative and left.

"We then went to the police station and they were not even ready to file a first information report," Mattoo said.

An FIR would eventually be filed 11 days later, after the family had run from pillar to post and convinced the magistrate to order it.

'He is up there proudly wearing the crown of innocence' 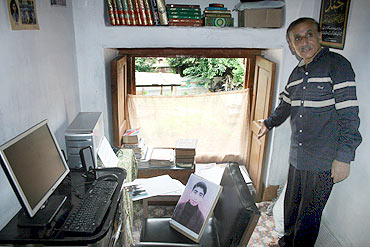 "The next morning, two doctors accompanied the government doctors for the post-mortem. The first thing they wanted to do was cut open his stomach. Our doctors protested, saying when it was clear that he was shot in the head what was the need to cut his torso open. Had these doctors not been there, god knows what else they would have done to him." Mattoo said.

The post-mortem ended with the doctors certifying that he was hit by a projectile in the head.

Even after this clincher, the police did not initiate a probe of any sort. In fact, their own inquest report "has neither head nor tail," according to Mattoo.

Indeed, when rediff.com accessed the report, there was nothing about the circumstances of the death, and the police did not have any explanation as to how he died. Nor does the report, which concedes that personnel from a neighbouring police station were the first to see the body, say what they were doing in an area far from their jurisdiction.

An eyewitness said three women who saw the killing ran out of their houses to stop the policemen.

"The women chased one of the policemen but the cowards ran away," one of the neighbours said.

Unlike other youngsters killed in the valley's protests, Tufail's innocence and that he did not touch a single stone is never disputed. Even the police stops at saying he died a "mysterious death".

"He is up there proudly wearing the crown of his innocence while these cowards are in the pits," the father said.

'My son has two graves' 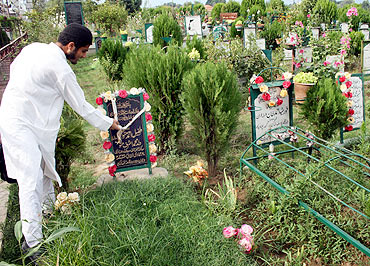 Image: A youngster pays respect at Tufail's grave in the martyrs' graveyard, downtown Srinagar
Photographs: Umar Ganie
When Chief Minister Omar Abdullah announced compensation for Tufail, it only further enraged the family, which declined to accept it.

"The state's compensation will not equal even the dust on Tufail's shoes. Which parent will accept such a lowly answer for something as big as the loss of their only son?" Mattoo asked.

He paused a while before resuming: "In fact, they look like the kind of people who will actually accept such a thing."

The family was not spared even during the funeral. There were clashes between youngsters and the security personnel on the way to the martyrs graveyard in downtown Srinagar.

"They couldn't maintain restraint even during his funeral. What kind of animals are they who first kill an innocent boy, and then deny him a peaceful farewell!" Mattoo asked.

"When they shot him, his skull broke and his brain spilled out. The police did not even see that when they took his body away. The locals took his brain and buried it. Thus my son has two graves," Mattoo, who was composed all along, broke down.

Meanwhile, at the martyrs' graveyard in downtown Srinagar where Tufail lies, there was space only for about eight more graves.

A lot of youngsters who attended Tufail's funeral told the elderly person tending the graveyard, 'Chacha, when we are killed, bury us here too.'

Soon, as more protestors were killed, all the eight spots were taken.

When the person in charge of the graveyard asked what he would do now, another said, "So what, the nearby plot is vacant. Please let me be the first to be buried there."
More
Print this
article
ALSO
READ
MOST
RECENT