'Protestors are men, women and children we know' 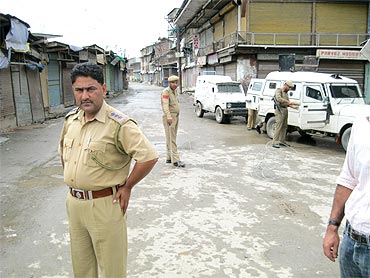 Are the men in khaki the monsters they are alleged to be in Kashmir? Sahim Salim meets a Kashmiri police officer to find out.

The men in khaki are enemies of the Kashmiri protestors who believe the "trigger-happy" police force will not hesitate to shoot them if they dare breach the curfew.

But are the policemen really the monsters they are alleged to be by Kashmir's protestors?

A majority of the men from the Jammu and Kashmir police are Kashmiris and have been posted in their respective police stations for some years now.

The protestors are individuals they have interacted with earlier on a daily basis.

So how do the men who were perhaps having a cup of tea together a few weeks ago face off now?

Inspector Zahoor Ahmed is posted at one of the most sensitive areas in the Kashmir valley, a residential area called Batmaloo. This area has three separate entrances leading to various alleys and sub-alleys.

When the stone pelters emerge, they hurl stones at the security forces from all three sides at the convergence point where Jammu and Kashmir police and Central Reserve Police Force personnel are stationed.

"It is extremely difficult to keep these protestors under control, when you consider the fact that these are men, women and children we know. We are the local police force and we know these people. It is different for the CRPF; they (the protestors) are strangers for them," says Zahoor, who has been the station house officer at the Batmaloo police station for one-and-a-half years.

Batmaloo is where three deaths were reported on July 6.

When the CRPF fired in the air to disperse a mob, a stray bullet hit Fancy Bano who was watching the protests from her balcony.

Zahoor says the police have not recovered the bullet a month after the incident.

"We are still ascertaining how she died. We did not recover a bullet from her residence," he says. "The post mortem report did say she died of bullet wound injuries, but we are still investigating the case."

On the other two deaths, the police officer claims Muzaffar Ahmad died after he jumped into a drain to flee the CRPF, a statement contested by local residents who allege the man was forced into the drain by the security forces.

The other man who died that day, Fayaz Ahmed, Zahoor claims, was "mentally unstable."

When I ask Zahoor how 7-year-old Sameer Ahmad Rah -- who the locals allege was beaten to death on August 2 -- died, he says, "Sameer died in the stampede that ensued after the locals started protesting."

As Zahoor speaks to this correspondent, a man arrives at the convergence point in a Wagon-R car to seek police permission to enter the area. One of his relatives has died.

Zahoor denies the man permission and asks him to return after 7 pm when the curfew is relaxed a bit.

"The curfews have affected us as well," the police officer says. "We also don't get to buy amenities and we have to stay on guard for 24 hours. Members of my staff have not had rest for 48 hours."

"We have to check who goes in and who comes out," he adds. "Sometimes despite our best judgement we have to turn away some people for the sake of peace. Since we are the local police force, residents ask us for explanations. When they get violent, we have to follow the orders issued to us."

Earlier in the series: Kashmir's young stone-throwers
'There's no saying what Kashmir's youth will do'
'My 9-year-old son wants to fight for azaadi'

ALSO READ: In Kashmir, pelting stones for a price
Reading the mind of the Kashmiri stone-pelter