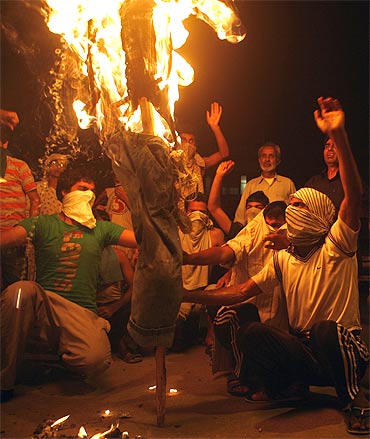 The current situation in the state of Jammu and Kashmir is a reminder, if such reminders are needed at all, that political initiatives need more than just cleverness to succeed. No one will deny that state chief minister Omar Abdullah and Union Home Minister P Chidambaram are among the cleverest and the most talented of Indian politicians.

Yet, the reach of their heart is not as wide as the grasp of their mind. Between Mr Abdullah's nonchalance in office and Mr Chidambaram's penchant for resolute action, a five-year record of relative peace and gradual progress, during the term of UPA-1, has been wasted.

Mercifully, in Kashmir, the 'have-quote-will-shoot' Union Home Secretary G K Pillai has not confounded the confusion. Sadly, the state's Governor N N Vohra, who was the government of India's special representative under two successive governments, and who stepped in to restore peace to a disturbed Jammu several months ago, has remained behind the scenes and has not been able to play a more helpful role in recent months. Perhaps the time for blame-game is long past.

There is no point in asking who is responsible for the current situation in Jammu and Kashmir. Why was all the good work of six annual visits to the state by Prime Minister Manmohan Singh, between 2004 and 2009, of the three Roundtables, of the development package, of the cross-LoC initiatives, of the dialogues with the Hurriyat, and of the conversations with the state's intellectuals, allowed to go waste? The Union government and indeed the state government are today paying the price of prevarication.

With such allies, why does the PM need any enemies? 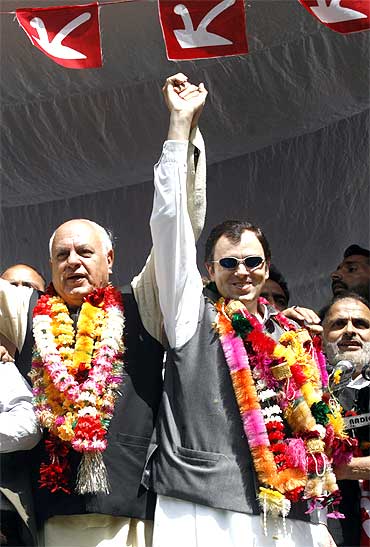 Mr Abdullah and his swashbuckling father, now a Union minister, have not exactly been helpful in taking the process of reconciliation forward. Worse has been the role of Mr Abdullah's two predecessors, Congress party Chief Minister Ghulam Nabi Azad, who put as many spokes as he could find in the wheels of reconciliation and empowerment that Prime Minister Manmohan Singh tried pushing forward, and of the state's 'elder statesman' Mufti Mohammed Sayeed and his irrepressible daughter Mehbooba Mufti -- both beneficiaries of their party's tenure in office but now playing a dubious role.

With such allies and colleagues, why does the prime minister need any enemies or foreign hands to undo the progress he had made in his first term in office? Recall that fateful day in April 2005 when Dr Singh inaugurated the Srinagar-Muzaffarabad bus service hours after cynical terrorists had attacked the bus station and tried to scare people away. People lined the route in thousands and cheered the first bus as it made its journey across the Line of Control. Then came local elections and provincial elections, and the great turnaround in public sentiment.

When the development package was announced, it was received well, but the people of the state reminded the Union government that it was not by financial packages alone, nor by infrastructure schemes, that the issue of Jammu and Kashmir would get finally resolved. On top of this foundation of investment must come the edifice of empowerment and reconnection. Ideas to take these initiatives forward have been around for a long time. Yet, UPA-2 has been inert and disengaged.

The PM must go to Srinagar and walk its streets 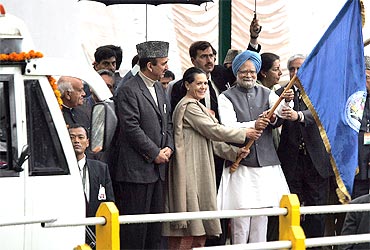 The few initiatives taken have not touched the hearts of the people. The time has come for the prime minister, who enjoys even now great popularity among the common folk of Kashmir, to speak to them in their language. Yes, the Armed Forces Special Powers Act may be difficult to repeal, but withdrawing the forces so that the Act has no jurisdiction is an option. Replace the armed forces with other security forces that can maintain law and order, and protect life and property. Undo the damage done by a series of security-obsessed orders that have come from the home ministry. Involve the separatists and all political parties in the dialogue with Pakistan.

The prime minister must go to Srinagar and walk its streets, and visit homes and meet people, even if they be angry and abusive, and seek to reach out to the youth of Kashmir, to Kashmir's mothers who mourn, to its traders and workers, farmers and students, and spell his vision out -- the vision of 'Naya Kashmir' -- which is the only way to go. His plan must be out there in the open.

It may well be attacked by opposition parties in India, by politicians in Pakistan and by hate-mongers on both sides. But the people of Kashmir will know that they have a future that will not only empower them politically, but also give them a great share in the prosperity of India.

The Congress party underestimates the appeal of its prime minister in Kashmir. He is the first prime minister after Jawaharlal Nehru who has been able to speak to the people of Kashmir in their language. His transparent sincerity and openness in dialogue have been greatly appreciated. Yet, unfortunately, Dr Singh has shied away from doing what he can and must.

People of Kashmir are not going to wait endlessly 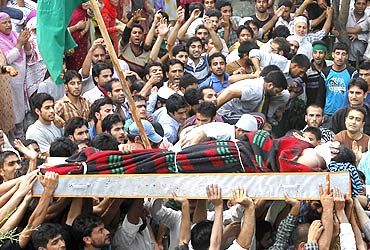 Perhaps there are some in the Congress party who think that a problem created by a Nehru that could not be solved by his daughter and grandson can only be solved by the scion of a new generation. That would be a pity, for the people of Kashmir are not going to wait endlessly for a new sun to rise. The time is here and now, and the prime minister must visit Kashmir before Independence Day and spell his vision for the state, unilaterally, without fear or favour. It is true that it takes two hands to clap, but sometimes there is merit in just raising one's hand in assurance and showing one's willingness to clap.

The people of Kashmir battle against an assortment of villains. The tragedy is that they have no heroes. Dr Singh can be that hero, if he is willing to stand up and be the leader that he must become. India's prime minister is not just a CEO, not a mere executive head of government. He is the institutional expression of the nation's sovereignty, of the hopes and aspirations of all Indians, he is and must always remain the last word in government.

If Dr Singh stands up and speaks to the people of Kashmir as the leader of the Indian people, he will be listened to with respect and trust. He has a message in his mind that must capture the hearts of the people of Kashmir, of India and, indeed, the sub-continent as a whole.