News
Business
Movies
Sports
Cricket
Get Ahead
Money Tips
Shopping
Sign in  |  Create a Rediffmail account
Rediff.com  » News » 'There's no saying what Kashmir's youth will do'

'There's no saying what Kashmir's youth will do'

August 17, 2010 15:54 IST
Asiya Andrabi, the woman separatist leader who is on the Kashmir police's most wanted list, speaks to Rediff.com's Krishnakumar Padmanabhan in an exclusive interview. 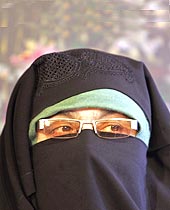 Many expected the stone-throwing protestors in Kashmir to back down following the arrest of separatist leader Syed Ali Shah Geelani in April. But in the time he spent in jail before being released recently, the protests not only continued but even gained vigour.

In that period, it was Geelani's lieutenant Masarat Alam and Dukhtaran-e-Millat chief Asiya Andrabi -- both of whom are most wanted by the police and are currently underground -- who spearheaded the protests in Srinagar.

Alam formulated the protest calendar and Asiya guided the youth.

Andrabi says it has been 45 days since she has seen sunlight. Neither has she seen her two children in this time. They keep moving from one relative to another as they also face police scrutiny.

A day before the month of Ramzan began last week, Andrabi spoke to Rediff.com's Krishnakumar Padmanabhan in Srinagar on the telephone.

What shape do you see events taking in the coming days?

It is unpredictable. The situation thus far is an indication that anything can happen. There is no saying what the youth of the valley will do.

I can't say for sure what the outcome of this protest will be and what shape it will take.

Many expected it to come to a halt in the month of Ramzan.

My perception is that it might intensify during Ramzan. Ramzan is the month of jihad.

The morale of the youngsters will also be high during this month. So, anyone who identifies with the cause of Islam will not abandon the movement in this month.

This is my reading of the situation. But if you ask for my opinion, we should in fact intensify the protests during Ramzan and fight the forces with renewed vigour.

What kind of a role have you and Masarat Alam played in the current cycle of protests?

I haven't been in contact with Masarat. When Geelanisaab was in jail, we guided the movement. After he came out, the movement is totally in his hands.

Today, it is Geelanisaab who heads the movement.

What did you do when he was in jail? What is your average day like?

We were guiding the youngsters. We are concerned about the future of Kashmir, and we have to let the world know about the atrocities that are happening here.

I usually write messages for the protesters. I write a lot. Then, I meet some of them and speak to them about how to go about with the protests.

Do you think things wouldn't have spiralled out of control had the state been proactive in probing Tufail Muttoo's killing?

I don't think so. What will be achieved out of punishing one policeman?

Had that happened it would have justified the blood that Tufail shed. Tufail was brutally murdered.

So even if those brutes who killed him had been punished, what difference would it make to the thousands of others who have lost their lives in Kashmir?

Coming back to the protests, some say it is a leaderless movement, while others say it is very much guided. Since you are at the forefront, how do you see it?

You can very well see where the movement is headed towards and what it seeks to achieve. You must only take it to the outside world. The direction is there and well established.

The Indian aggression in Kashmir is there for everyone to see. All this talk about leaderless protest is also an Indian ploy to discredit the leaders of the movement.

The State is brainwashing the people of India.

My children born after 1992 have not seen their father ever. They ask me what crime he committed. I tell them he committed a crime against Indian occupation.

What can India give to these children? My family is well settled in England and Europe and America.

But I decided to stay on here, because I wanted to fight for Kashmir.

In fact in most places, fourth graders lead the protest. The crowd is behind them.

So in essence the youths are the leaders and Geelanisaab is their guiding light.

If you are saying that, then why did they force shops to shut on August 8 at 2 pm, when Mr Geelani had called for a full open day?

There was some misunderstanding. Nothing more than that. Later on, they reopened the shops.

Masarat had issued an earlier calendar, where he had called for a shutdown after 2 pm. Then we asked people to announce on loudspeakers that Geelanisaab had called for shops to be open for the day and they opened it.

Mr Geelani had also appealed to the youngsters not to throw stones. But that particular day in fact saw more stone-throwing.

Dekhiye (Look), if he says things like that, the youngsters will not listen to him.

What he says will not make a difference in this matter. And you have to understand that he is 82. His sentiments would be different from those of an 18-year-old.

I tell you firmly, if he says not to throw stones, our children won't accept it.

There are 10 lakh forces in the valley. Of course, the youngsters will protest against that presence. They will throw stones.

Do you see Masarat Alam or you leading the separatist movement after Geelani's time?

I am a woman, and I will do my responsibilities accordingly. I don't want to lead the nation. A woman's job is not that.

I will always be willing to give advice and suggestions to those who are at the front of the movement.

But the present time is Geelanisaab's platform and he is ably leading the freedom movement.

After him, there are plenty of youngsters who are capable of leading the movement. The younger generation will decide on that.

What is the difference between the earlier generations and this particular generation? Do you see this turning into an armed struggle again?

See, from 1947 to 1989 there was neither stone nor gun. But nothing happened. Our people were trampled upon.

In 1989 some people thought they will take the gun. But it was as good as having nothing. There were 10 lakh (1 million) Indian troops in the valley.

Now the youngsters have decided they will not go the violent way. They are fighting with nothing but stones in their hands.

Even after this if India thinks Kashmiris can be integrated with India, then they are wrong.

Not a single Kashmiri will go with India.

But if the situation persists, then there is every chance that it might turn into an armed struggle.

Finally, there has been a lot of debate about whether throwing stones is Islamic. You are an Islamic scholar...

It is absolutely Islamic. Prophet Mohammed himself has thrown stones. If anyone says stone-throwing is un-Islamic, it is they who don't know their Islam.

EARLIER IN THE SERIES: Meet Srinagar's young stone-throwers
ALSO READ: In Kashmir, pelting stones for a price
Reading the mind of the Kashmiri stone-pelter
Explained: Why Kashmir is burning