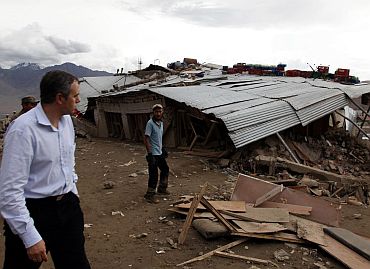 Twenty bodies were on Saturday pulled out from slush and debris in Leh town ravaged by flash floods, raising the toll to 132 even as rescuers intensified operations in the high altitude terrain to search for 600 missing people.

"We have recovered 132 bodies so far and at least 370 are injured. The number of missing is being ascertained," State Police Chief Kuldeep Khoda said, adding the toll may go up.

Sources fear that the death toll could cross over 500 as several remote villages were yet to be accessed by rescue teams. Thousands were left homeless.

A small village before Choglumsur, which bore the brunt of the incessant rains, was completely wiped out as rescue workers were looking for survivors in the mud slush and debris.

Gushing waters flattened houses, tossed cars and buses leaving behind a trail of death and destruction. People hit by the flash floods were still coming to grips with the catastrophe. 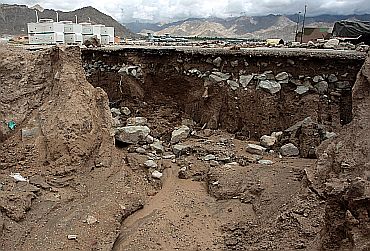 Image: A landslide caused by the disastorous cloudburst in Leh
Photographs: Umar Ganie

A contractor told senior state administration officials that 150 labourers employed by him were missing from Shyong village where he had lodged them.

The colony was set up along Indus river and the officials feared that many huts would have been washed away in the flash floods. "The Indo Tibetan Border Police has retrieved 30 dead bodies.

"We have rescued 100 victims from under the debris on Saturday. Three relief camps have also been opened up since yesterday," ITBP spokesperson Deepak Pandey said.

The General Reserve Engineering Force and ITBP are plugging the breaches on Leh highway, he said. The army has been asked to give an account of local and outstation labourers.

Authorities said that the army had suffered losses in Turtuk area. Some of the villages along the Chang La pass, world's second highest motorable road, were also believed to have been washed away in the torrential rains. 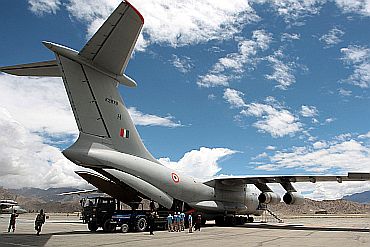 Home Secretary G K Pillai said in New Delhi that five to six civilian flights are likely to take off for Leh tomoorrow to bring back people including foreign tourists stranded there.

Satellite telecom equipment is being flown here to restore the mobile and telephone connectivity in the city and adjoining areas, where communication services have snapped.

"The Tri-service Disaster Management Coordination Group on Saturday decided to send special service aircraft to carry 19 Very Small Aperture Terminal and other equipment of BSNL to Leh so that mobile and telecom connectivity could be restored there," a defence ministry official said.

Chief Minister Omar Abdullah had yesterday visited the affected areas and made an on-the-spot assessment of the situation. Army spokesman Colonel J S Brar told PTI that rescue operations which had slowed down due to heavy rains have picked up again.

"Among the injured, 300 have been treated...The other injured are treated in army hospital. The 31 Army jawans missing haven't still been located. We found a body," he said.

Labourers from Chhatisgarh working mainly in projects of the Border Roads Organisation and various other infrastructure development programmes are among the survivors.

"Of the over 400 injured survivors admitted to the Army General Hospital here for treatment, around 70 are from Chhattisgarh," army officials said.

Three JCOs and 30 other ranks of the 15th Battalion of the Bihar Regiment are also still missing and operations were on to trace them. The defence spokesman said adequate number of aircraft and helicopters were available at Kargil, Chandigarh and Udhampur to move to Leh. 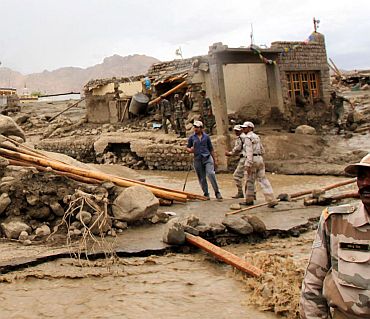 Air Force has opened a disaster management cell at Chandigarh, comprising three senior officers including medical officers. DRDO scientist and disaster response team member W Selvamurthy said, "After the cloudburst last night, there were heavy rains and water in large quantities flooded low-lying areas of the city. On our way to the DRDO lab in the area, we could see the devastation."

"This is a very unusual phenomenon in this area because Ladakh is a barren desert. It hardly rains here and five years ago, there was a similar incident on a very small scale," he said.

"The number of natural disasters have increased in the recent past and this could also be attributed to global warming and climate change. One of the DRDO labs is studying the impact of global warming on high altitude areas," he added.

Two teams from health and family welfare ministry comprising specialist doctors and surgeons from Delhi also flew in here. IAF has agreed to carry bodies of foreign tourists and non-locals to Delhi by air.

The chief controller (Research and Development) DRDO, W Selvamurthy, along with a team of experts also arrived here. Air Force has opened a disaster management cell at Chandigarh, consisting of three senior officers including medical officers.