Image: A flag of the Khyber-based Lashkar-e-Islam painted on a wall in Bara town in Pakistan's Federally Administered Tribal Areas

Pakistan's lacklustre approach to bring to justice the 26/11 perpetrators has basically frozen Indo-Pak peace talks, says an official US report, which has also warned that the Lashkar-e-Tayiba remained a serious threat to Western interests.

US State Department's annual 'Country Reports on Terrorism for the year 2009' said the Lashkar, said Pakistan's FATA and northwest continues to be a "safe haven" for Al Qaeda and Afghan insurgents.

Expressing concern over the lackluster approach of Pakistani authorities to bring to justice the perpetrators of the Mumbai terrorist attacks, it said the Lashkar, which executed the deadly attacks, remains a "serious threat" to western interests. 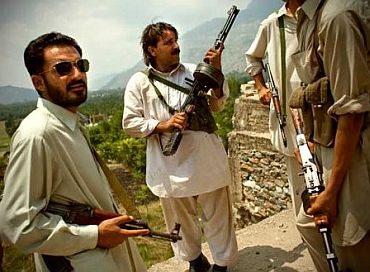 Image: Tribal lashkars, or local militias, are taking a stand in Swat

"In response to allegations of involvement by LeT in the Mumbai attacks, Pakistani officials cracked down on an LeT camp in Muzzafarabad and arrested or detained more than 50 LeT or JUD leaders in Punjab and elsewhere in Pakistan, but it subsequently released many of them. LeT remained a serious threat to Western interests," the report, released on late Thursday night (Indian Standard Time), said.

"Pakistani officials pledged to prosecute all individuals in Pakistan found to be involved in the Mumbai attacks and offered to share intelligence regarding the attacks with the government of India. At year's end, however, peace talks between Pakistan and India remained frozen amid Indian allegations that Pakistan was not doing enough to bring the terrorists to justice," the report said.

It said: "The Federally Administered Tribal Areas (FATA), Baluchistan, the North West Frontier Province, southern Punjab, and other parts of Pakistan continued to be used as safe havens for Al Qaeda terrorists, Afghan insurgents, and other terrorist groups." 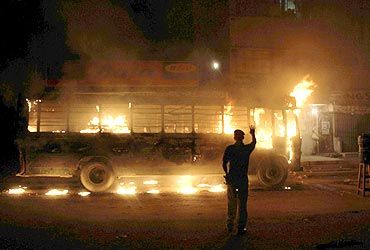 Image: A bus torched by protestors in Karachi

"The informal and secretive nature of the unlicensed hawalas made it difficult for regulators to effectively combat their operations. Most illicit funds were moved through unlicensed operators, including through bulk cash smuggling," it said.

The State Department said, foreign terrorist organisations, including Al Qaeda and its affiliates, continued to operate and carry out attacks in Pakistan. At the same time, it noted some of the significant gains made by the Pakistani government in its fight against terrorism, clearing several areas of their control after the insurgents failed to honor an agreement with the government.

Another major blow to the terrorists in Pakistan was the August 4 death of the leader of Tehrik-i-Taliban Pakistan (TTP), Baitullah Mehsud, it said.

At year's end, Pakistan's paramilitary Frontier Corps (FC) was engaged in fighting against a banned terrorist organisation, Lashkar-i-Islam (LI), in the Bara subdivision of Khyber Agency, while the Pakistan Air Force and Army Aviation was striking the TTP in Orakzai Agency with aerial bombardment in advance of a possible ground assault.